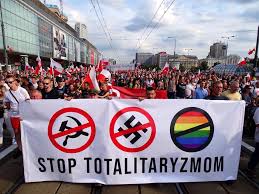 In the early hours of the morning of September 1, 1939, Nazi hoards began bombing a village of peaceful, sleeping civilians. This attack of barbarians was but the first in an never-ending stream of brutality and war crimes. On the 17th of September the Nazis were joined in the rape of Poland by the Soviet Red Army. Once again, as has been so often the case, Catholic Poland was crucified by godless Christ-haters. 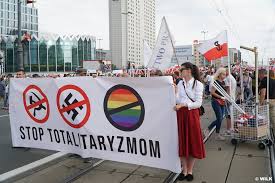 Today, Poland continues in her struggle against the forces of darkness. The enemy is the same, the bases of operation are different. Now, the threat comes from the so-called "democratic" West. Rather than bombs and bullets, the weapons of choice are propaganda, lies, deception, and moral subversion. Covert, and increasingly overt persecution of Christians is becoming the norm. Just the other month the Orthodox Archbishop of San Francisco wrote to the anti-Christian Governor protesting the persecution of Christians in California, and the Governor's adoption of Soviet-style tactics.

Poland is one of the few remaining Nations that has not yet been completely swamped by atheistic materialism. But the enemy never rests and Poland is under constant, vicious attack.

Yes, there are still signs of Polish resistance and public manifestations of defense of Christian morality that are unthinkable in our apostate Nations.

Email ThisBlogThis!Share to TwitterShare to FacebookShare to Pinterest
Labels: Protect the Children, The Persecuted Church