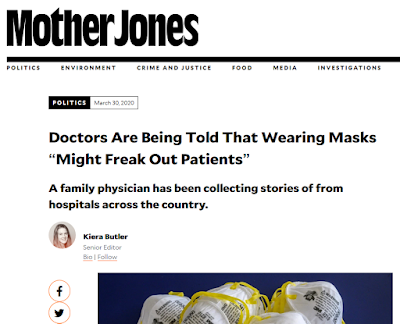 When you have people not trained in healthcare running healthcare, you have serious problems. I can report to you from my anonymous sources inside the healthcare system, that staff at Toronto hospitals (up to two weeks ago!!!) were being told by Administration to "not wear masks as it will frighten people".

Who could imagine such a thing? This is techno-bureaucracy gone mad!

I can also inform you that staff were very angry, felt intimidated and abused. Friends, this is despicable!

Now, suddenly, all staff are mandated by these same inept Administrators to wear masks when in hospitals. Are you begin to understand how criminally incompetent these people are who are running our healthcare system?

These massive salaried techno-bureaucrats view healthcare NOT as a sacred vocation, but merely in numbers. For the Administrator - YOU are a NUMBER.

For your devoted physician and nurse, YOU are a PERSON.


The techno-bureaucrats coverup too. When the CEO of a leading Toronto hospital (affiliated with the Catholic Church) was discovered to have a pornographic video collection in his Office, he was secretly asked to resign so as not to cause scandal, because the Board was fearful of losing donations from the community. But it got even worse. This person was returned as CEO at another leading Toronto hospital (secular affiliation)! Edifying isn't it? 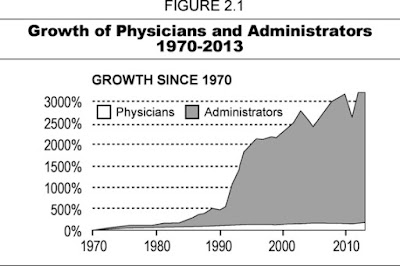 Friends, it is not about a sacred vocation of caring for people. It is about money and power: keeping the techno-bureaucratic system intact, with the public deluded into thinking that these Administrators know what they are doing.

Along comes a pandemic. Suddenly we have people, many from the comfort of their plush homes complaining about lockdown. They have zero sympathy from me. Where were they when so many languish in LTC facilities as outcasts? How many elderly or cognitively impaired are abandoned, visited perhaps once or twice a year? I know this for a fact. It is happening right here in Toronto.

In the US, many of these facilities also have a practice of taking in otherwise healthy people on Medicare awaiting elective surgery, and then defraud the US government by providing grotesquely substandard and dangerous care. Much of it also in conjunction with corrupt and incompetent State run health services. Medicare fraud, much of it highly organized, many times is run by sole proprietorships listed as "nonprofit", defraud the US taxpayer hundreds of billions of dollars EVERY YEAR. American readers, if you suspect Medicare fraud, call the FBI immediately.

And lest Canadians sit back smugly, just re-read the above scandals, and also consider that the vast majority of LTC facilities in Canada (under provincial jurisdiction) are run the same way as in the USA. Private corporations are subsidized by the taxpayers. All of this is legal. The shareholder gets a return, the taxpayer picks up the difference and more for the profit, and the person in the home suffers for it. I know, I know a lot of people inside the system.

When they tell you we are going to make the healthcare system better, are you foolish enough to believe them? Are you aware (e.g.) that nearly 60% of Alberta's budget goes to Alberta Health? In Ontario it is well over 40%. You tell me how long that can go on for? This is unsustainable.

The system is broken. Financially collapsing. The system is also defective; based on an outmoded 1960s model that no longer reflects 21st century reality. This also feeds the financial and techno-bureaucratic corruption.

But it is now even worse: it is morally corrupt.

Health care needs massive reform: it must be taken out of the hands of  big business and profiteers as well as out of the hands of government. It must become community based. It has to be put back into YOUR hands, and those who actually take care of you. Your physicians and nurses. Your therapists, and other health care professionals.

Watch this video. Learn. Perhaps coronavirus will be the final hammer in a corrupt, inefficient, obsolete health care system.

If you sit back and do NOTHING, then nothing will happen.

It will depend on YOU!

Thank you for this clinician's revelation of what's really happening.

I pray and hope we see an end to *non-clinical leadership*; an end to *gag orders* on front-line staff who are speaking out on the system's failures.

Let's hope this brings about a call to action; and an end to *nurse slavery*!
The Covid Manifesto should begin today.

I watched this video a second time; let us hope it goes viral.

In Britain, every Thursday evening at eight o'clock, we clap hands and beat pots and pans, applauding essential workers. It lasts over five minutes. People open their windows or stand in the streets clapping.

This tribute is for all essential workers, from grocery store staff to those in public transport, sewage, and power supplies. These are the people who CAN'T work from home. Without them we are in darkness; cold and hungry.

Front-line doctors, nurses, laboratory staff, and hospital cleaners are very exposed to the Wuhan virus. This brave clinician in your video is one of them.

Incidentally, in London (England) five people in transport have just died of COVID-19 - three bus drivers and two controllers. We owe essential workers everything. They are dying so that civilization can function.

To all who follow Toronto Catholic Witness, as well as Barona and Irenaeus, take EVERY precaution to remain free of this evil virus.

As a poet wrote in 1918 (quoted at the end of Barbara Tuchman's book The Proud Tower): *I summon the living, I mourn the dead.*