A Tale of Schism of those who want to "save" the Catholic Church: Do not answer Schism with Schism (Part Two) 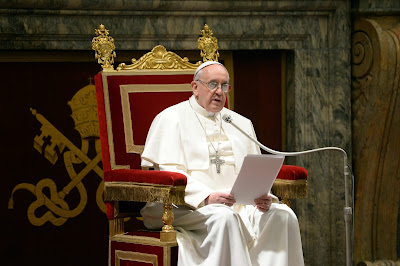 In my previous post, I outlined the dangers that Catholics have encountered as the crisis in the Church ever deepens. The solution is not to abandon the Church for some synagogue of Satan, but to remain by Her side, faithful. To not lose faith in the Church.

We must put our Faith in God who is allowing this crisis for His reasons. In our pride can we not see that we are very much deserving of a punishment from God? Why should He spare us when we are guilty? How many abortions will take place in the world in the time it takes for you to read this post? How many blasphemies, ingratitudes etc? How many Catholics engaging in sodomy, contraception, and other acts the profane the Marriage Act? All the while proudly boasting that these same acts are virtuous and blasphemously claiming that Christ approves of them and the Church is wrong!

Following the Council, the Abbe de Nantes combatted the errors of the schismatic Integrists, who, following private judgment, declared Paul VI  deposed for heresy. These errors put forward by Catholics today, many emotionally unstable, many ill-educated, most poisoned with liberalism,  must be combated even more rigorously in our day, as the temptation to schism and defection from the Catholic Faith will increase due to the confusion in Rome.

In reaction, many Catholics claiming to be "traditional", reject Christ the King, turn religion into a "show" with lace, smoke (and mirrors?), but infected with liberalism and secular messianism. They trot out their pet "icky" alleged heresies of Francis, but remain silent, or obliviously ignorant of their own. A cursory glance over the social media activities of many a noisy and strident "traditionalist" will quickly unmask a flaming liberal totally addicted to secularism. These Catholics would most definitely come under censure of such great 19th century popes as Pius VI, Gregory XVI, and Pius IX. These Catholics have also forgotten the condemnation of Pus XI that social modernism is just as sinful and evil as doctrinal. The attempts by the churchmen to compromise with liberalism (especially in dethroning Jesus Christ) has allowed the once Christian nations to totter, drunk on poisonous liberalism, to their moral ruin. Be very aware friends of whom you might call a "heretic".You may be surprised.

The temptation to fall into a schismatic mentality, to doubt the Church, is to endanger one's faith, and perhaps even lose it. Sedevacantism becomes a mental trap and is elevated to a type of "super-dogma". The Catholic Church will outlive the evils that are placed upon Her by the devil and his minions: demons and evil men. The Church's indefectibility and papal infallibility is from God, and not men. When we doubt God's power over His Church, over history, we, like the Modernists and the Integrists begin to think too humanly, rather than submitting to the Divine Will.

The various protestant solutions (as they are based on private judgment) such as that Bishop Ratzinger is still Pope because he only schizophrenically resigned "part" of the Papal Office is just diving down another rabbit hole: it would expose Ratzinger himself as a schismatic, guilty of misleading the Church and millions of souls into following an anti-pope. What kind of a man would Ratzinger be if indeed this was all a fudged "resignation"? He would be a moral and spiritual monster. His sin would far, far worse than any "sin" Francis has committed. As I have written before, these various excuses are merely pretexts for disobedience.

Let us return to the Abbe de Nantes' answer to the question of a Pope and bishops suspect of heresy. To break with the visible, hierarchical Church is not the answer. In other words, to engage in one's own act of defiance, of schism, heresy and rebellion. To think otherwise is a delusion, and from the Evil One.

May Catholic charity always triumph in our hearts ! One does not answer schism by schism. In the face of ill-feeling, partiality and hatred which raise barriers and trenches, our only answer must be that of love, that love which is founded on the infrangible community of the sacramental life. The Church is the charity of Christ spread and communicated amongst all the brothers. Whilst our brothers maintain albeit only the appearance of belonging to the Church, we must hold and retain them in Catholic charity without accepting their ostracism and their scission, and without adding our own thereto. If we quit the community, if we emancipate ourselves from hierarchical authority and reject its jurisdiction, we reinforce the schism, we provide it with the homogeneous consistency of a sect, and we give it a free hand in the Church ! We must stay put, resigned to being punished, to suffering and to obeying whatever is not forbidden or intolerable, as martyrs for Catholic Unity and Charity... We must reject everything that is commanded for the purpose of subversion and not let ourselves be penalised without protesting. But never, never ever, will we contest the unique inviolable power of jurisdiction that belongs to the Pope and to the bishops united to him. Even though they behave unjustly, it is they who are the Catholic hierarchy, not ourselves.

“One cannot save the Church by building on other foundations. But some people wanted to persuade me to do just that. As someone unjustly (although legally) deprived of all power of jurisdiction over souls by a Pope and bishops suspected of schism and heresy, I was supposed to consider myself a victim of persecution and to attribute to myself some kind of extraordinary jurisdiction directly derived from God ! The determining factor was meant to be the pressing necessity of souls who were in danger of perishing in a Church that had completely lost her direction. Well, my answer to this was : never, not at any price. Such jurisdiction has never been recognised by the holy canons except in the case of bishops in countries where persecution has totally destroyed or paralysed the local hierarchy. Presuming on the assent of the Holy See, these bishops would exercise this kind of extraordinary jurisdiction to save these Churches from total ruin and to provide for the urgent necessities of souls (Dom Gréa, L'Église, p. 235-238). As none of this can be verified in my own case, the usurpation that is proposed to me would be invalid, criminal and strictly schismatic.

We are not the saviours of the Church. Rather it is she, both now and always, who is our salvation. I may not actually see this, but I believe it with an unwavering faith : the salvation of the Church today, as yesterday and for all times, is to be found in her Pastors. Although temporarily sunk in the error and sectarianism of their Reform, this grace still subsists in them, indefectibly. It may not be apparent, but it is ready on the day appointed by God to spring forth again for the salvation of all. The disorder may be great, the damage to souls mortal, but God does not wish to govern us except through the hierarchy. In such a sacred matter He cannot tolerate any fraudulent usurpation. If we were foolish enough to imagine that we could save the Church by carrying her off with us into the escapade of yet another schism, we who are nothing, it is we and we alone who would be irremediably lost. The only life we have within us is that which we have received. It is from the Roman Rock alone that this life springs forth.

The Church does not lie within us. It subsists in those very men whom we see busying themselves in her ruin and whom we nevertheless believe, by virtue of their apostolic jurisdiction, to be the bearers of Christ's grace. We ourselves have no share in their powers of order and ministry except in the exact extent to which they delegate it to us. Thus, I am recognised as having the power to celebrate the Holy Mass, and this would be the case even if I were to be punished by an unjust excommunication (which God forbid !), provided that I then celebrate it in private and without the risk of scandal. I also retain the power to give absolution to those who are dying... I give thanks to the Church for these faculties which she allows me to keep. I make use of them and I will continue to do so. But to go beyond this would be to build a simulacrum of the Church outside the Church. Good heavens ! What would be the point ? To deceive myself into thinking that I could save everyone ? Ah, no ! When the schism of this Reform is over, I do not wish to be separated from the Church.


Whatever we do: we must keep Christian charity and pray for one another.

Part One: A Tale of Heresy and Apostasy from those who want to "save" the Catholic Church

Part Three [upcoming]: Pope Francis, Papal Scandal and Heresy: What can faithful Catholics do?
Posted by Barona at 07:00