An Open Letter to Canada's Bishops: Why did you help re-elect Justin Trudeau? 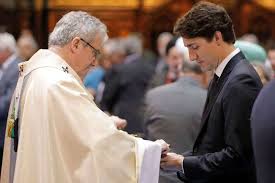 We write to you, the morning after the 2019 Election with a few questions:


Where were you when a brother bishop gave the Holy Eucharist to Justin Trudeau at a Solemn Mass in Ottawa?

Where were you, when Justin Trudeau advocated un-Christian moral positions as a Member of Parliament?

Where were you when he considered severing Canada as a nation, to protect the crime of abortion?

Where were you when he came out as Liberal Party Leader and banned pro-life candidates?

Where were you when he was running on an openly, militantly, pro-abortion, pro-LGBT and pro-marijuana agenda platform in 2015?

Where were you when he was pushing euthanasia?

Where were you when he rammed euthanasia through Parliament?

Where were you when he was marching in "Gay Pride Parades"?

Where were you when Trudeau's hand-chosen atheist Governor General mocked religion?

Where were you when he rammed pro-marijuana legislation through Parliament?

Where were you - when time and again - over the years in his townhall meetings he would keep pushing the abortion and LGBT agenda?

Where were you when he came out during the 2019 election campaign to say that abortion was a "good"?

Where were you during the 2019 election campaign to call for the end of abortion, euthanasia and legal drugs?

Where were you when he promoted and pushed the latest horror of the LGBT agenda: transexualism?

Where were you when he was pushing the "LGBT" agenda on the international stage?


There are assuredly many more other examples of your inaction and silence, but we have made our point.


We pray for your conversion, that you repent of your spiritual and moral crimes. We pray you will obtain the courage to resign from your Sees, which you have profaned with your inaction, even collusion with Trudeau. 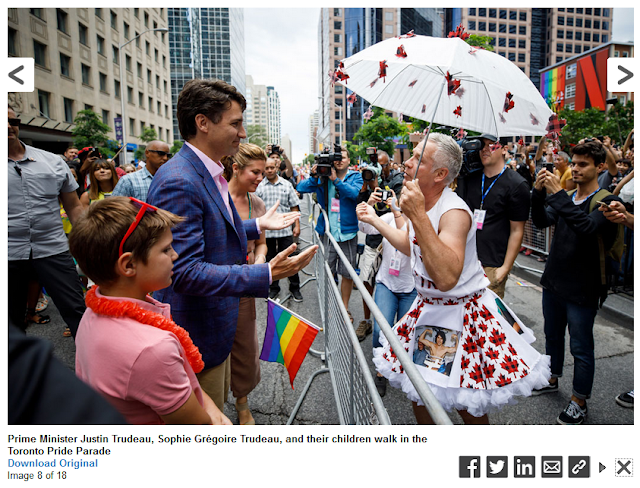 Sincerely, The Witness Blog
Posted by Barona at 12:21

What you say of the Canadian bishops is true, but it's also true for the faithful. Where were they to each of your questions? Where are we in Canada?

You are absolutely correct. In my previous post, I wrote this:


Why would Canadians, time and again, vote for politicians whose stated aim is to promote abortion, "same-sex marriage", and other grave evils? Let us be honest, the population itself is evil and decadent. The population votes for those they approve.

Toronto, demographically is 32% Catholic (2015 Statistics Canada), yet the vast majority of them will vote pro-abortion. It is estimated by Ipsos that 77% of Canadians are pro-abortion; with 53% supporting partial-birth infanticide. This is where we are morally.

In this post, I wanted to emphasize the fact that Catholics have become decadent due to the "misleadership" of the Hierarchy. And this for decades. Obviously, this is not the only factor, but the bishops, in their betrayal (indeed, many actually going over to the side of evil) have led millions of Canadians into error and heresy.

These decadent Canadians (just life their bishops and priests) voted en masse for many a pro-abortion, pro-"LGBT" politician. Simply because they themselves approve of abortion and unnatural sexual acts.

*A time is coming when men will go mad, and when they see someone who is not mad, they will attack him, saying, 'You are mad; you are not like us.'*

These were the prophetic words of Saint Anthony the Great (251-356) a Christian monk from Egypt, who lived until the age of 105, and whose biography (360) was written by Saint Athanasius *Contra Mundum* of Alexandria, who alone stood against the Arian heresy and against the sinful hierarchy of his day.

This is a very dark hour, like the years 1940-41 when Britain stood alone against Hitler and the Third Reich except for the support of Canada, Australia and New Zealand.

These bishops who support Justin Trudeau, and allow him to receive the Eucharist, are neither Catholic nor Christian.

Pray to Saint Anthony the Great and Saint Athanasius; pray that Canadian priests and members of the laity who are faithful to Church teaching, will speak out fearlessly and stand up for Jesus Christ.

The latter is a sermon by a good and faithful American priest from the parish of South Saint Paul.
I recognise his voice from a sermon last year, when he quoted the prophetic remark of Saint Anthony the Great.

Just tonight I read of a father in Texas, Jeffrey Younger, who has failed to prevent his wife from having their seven-year-old son chemically castrated, and be given female hormones and puberty blockers.
The mother has always made the boy wear girls' clothes.

When will this evil insanity end?

Pray for us Saint Anthony and Saint Athanasius.
Pray for the Catholic Church in Canada, beautiful Canada to which so many Irish, Polish, Italian and Scottish Catholics emigrated in hope of a better life.

Trudeau's little pet bishops are blind guides, and they are leading souls under their care into the fiery pit.

They are like so many (not all) of the homo-heretic bishops in the United States, who support the child-murdering abortionists in the Democrat Party.

*Then the disciples came to Him and said: Are You aware that the Pharisees were offended when they heard this? But Jesus replied: Every plant that My Heavenly Father has not planted will be pulled up by the roots. Disregard them! They are blind guides. If a blind man leads a blind man, both will fall into a pit.*

My late father's Douay-Rheims Bible spells out, even more urgently, the Lord's judgement on all those world-pleasing, media-pleasing, abortion-pleasing, gay-pleasing, false bishops.

*But He answering them said: EVERY PLANT WHICH MY HEAVENLY FATHER HATH NOT PLANTED, SHALL BE ROOTED UP.'

So Canada elected him, again. An obviously evil man. The people want him.
I am sorry for Canada's faithful. Sorry for the Canadian babies as in the United States who will suffer and be mangled by abortionists.
The people in the US as in Canada, would not doubt rush to aid and assist a baby in any kind of trouble. They would do anything to help that baby, because everyone loves babies if they have any kind of heart, and this is true of most Western people. If a baby were in an emergency, say a burning building, who would not fight to go in and get that baby, if they heard a weak and pitiful cry, they would risk life and limb to go in and grab that child and rush the baby to safety, even if it meant risk to themselves. If the baby were slightly singed, a single hair, what heartbreak there would be. A child in pain is unacceptable to Western people.

Those same people see no problem, five minutes before full-term birth, with plunging scissors into the skull of that beautiful baby, sucking out the brain contents, until that baby goes limp, dead.
This is not consistent people, this is madness. You owe it to decency to see a video of an abortion and the aftermath and then say if you can, I support abortion! If you haven't done that, you are supporting something you yourself do not have to see, and how easy that is. It was the same in Germany. At least have the courage of your convictions, and see a video and the aftermath, and not just an early term, a late term, so you can see exactly what it is you endorse. Then God help you.