Come on out, come on out, there's going to be a war"! ~ Great Britain declares war on Nazi Germany 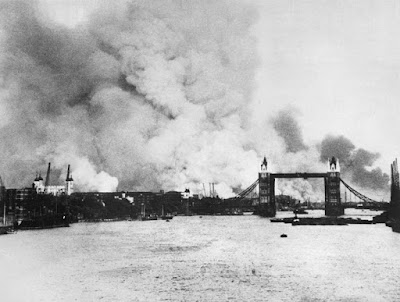 "Come on out, come on out, there's going to be a war"! Those were the words my grandmother spoke as she hurried down to the water's edge by the seaside on that fateful Sunday of September 3rd, 1939 to bustle my mother and uncle out of the sea. 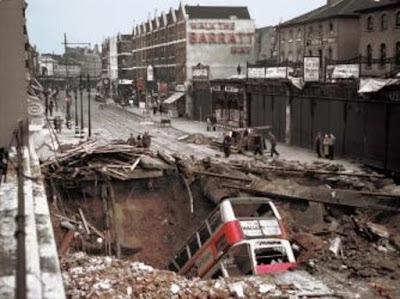 She had just heard that Great Britain had declared war on Nazi Germany, after the Third Reich's invasion of Catholic Poland two days earlier, on September 1st.

King George VI addressed the British Nation and the Empire in these words:

“The task will be hard. There may be dark days ahead, and war can no longer be confined to the battlefield. But we can only do the right as we see the right and reverently commit our cause to God.
“If one and all we keep resolutely faithful to it, ready for whatever service or sacrifice it may demand, then with God's help, we shall prevail.”

The Phony War broke out instead,  to be followed by the Germans quickly conquering the Low Countries, France and then Denmark and Norway in 1940. The real clash would begin in September and last well into 1941, being eventually known as the Battle of Britain. The Polish Squadron, 303 would have the highest percentage of kills on any air force in the war, and Polish airmen in the 16 Polish squadrons were instrumental in defeating the Luftwaffe over the skies of Britain.

After living through the beginning of the Blitz on London, my mother spent the rest of the war in Llandudno, Wales. My father's experiences were far less forgiving, he was arrested by Nazis in the town of Przemysl, Poland, and did slave labour in Germany and occupied Norway, before escaping through the mountains into neutral Sweden.

By war's end, Catholic Poland and a multitude of other nations would be betrayed into decades of slavery under the Soviet Union. I remember the stories my father told me of the personal experiences of Polish troops in London following the western capitulation to Stalin. Men who had risked their lives fighting for freedom were forbidden to march in D-Day parades, and were relegated to the most degrading and menial jobs. Officers included. Truly Poland had been betrayed. It would come out later that both Great Britain and the United States had been deeply penetrated by communists. The Roosevelt regime was distinguished in the number of traitors that infested it.

With traitors afoot during negotiations on the future of Europe, the Allies were completely outflanked by the deceptions of Stalin at Tehran and Yalta. Decades later, Bolshevism would collapse in Russia from its own internal contradictions and the resilience of the long suffering Russian people, where (much to western neoliberal horror) a Christian Orthodox revival replaced it. Today, in Russia churches are being built, while in the apostate west, churches, if not being pulled down, sold, stand empty.

Following the War, the Western Nations quickly either forgot, or twisted to be give new and false meanings to the defeat of totalitarianism. The neoliberal elite, became addicted to a poisonous stew of neo-Marxism, international finance/corporatist capitalism, and washed down with a hideous neopagan sexual gnosticism, whilst claiming to oppose fascism and be fighting for "democracy", are in actual fact the ones who are the fascists and the enemies of representative democracy and any semblance of freedom. The very countries who defeated totalitarianism, are becoming totalitarian before our eyes.
Posted by Barona at 06:00

*The very countries who defeated totalitarianism, are becoming totalitarian before our eyes.*

In my youth I read American writers.
Saul Bellow and Paul Goodman sharply critiqued the youth culture of the 1960s.
Norman Mailer saw a totalitarian strain in American liberalism.

Now I think of the Sixties as the decade that never ended.

Even Pope Francis refuses to question (or reconsider) the New Order of the Mass, which came into effect in the late Sixties under Pope Paul VI.
Pope Benedict made it easier for parishes to have the Latin Mass, much to the fury of the Modernists.

The concept of the Christian family was undermined during the Sixties.
In the United Kingdom many children grow up without a father.
The Permissive Society set the stage for the present mood of post-birth abortion, diversity, and anti-Christian legislation.

Politicians, policy-makers and the cultural elite are determined to destroy any vestigial traces of Christianity.

Strangely this seems to be happening everywhere at once - Canada, Scotland, England, Ireland, France, Germany, Poland.
The United States with its strong Protestant tradition is in a position to challenge this new totalitarianism.

I felt heartened by an interview on YouTube with Canadian Catholic writer Michael D O'Brien. He is talking to Father Joseph Fesso, SJ.
The genesis for one of his books took place while he was praying before the Blessed Sacrament.

I have now ordered a new biography of Michael O'Brien, 'On the Edge of Infinity' by Clemens Cavallin.