ARE CANADIANS CALLING DOWN GOD'S DAMNATION ? ~ What happens to a Nation that glories in Sin? 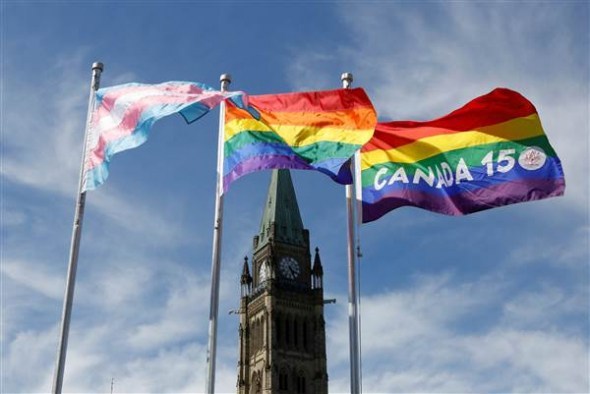 Will God in His Justice strike down this accursed country, Canada?

Founded in the 1600s by devout Frenchmen, a Catholic civilization, "France in America",  was gradually built. Superior to the protestant English colonies in every way, Quebec was a glorious Catholic jewel.

Sadly, she was conquered by the wretched heretics in 1759 on the Plains of Abraham. Nonetheless, Les Canadiens resisted, led by the the Catholic Church. In a noxious spiritual poison of Anglo-Saxon protestantism and Freemasonry, Les Habitants de Quebec remained faithful to Christ and His Church.

But something happened. The spiritual pride of Les Canadiens, of being the self-appointed "converters" of the wayward protestants of North America fell by the wayside, as the elite seminarians of French Canada were sent off to Europe to the "best" seminaries.

By the time these bright young men of Quebec returned from Europe they had been transformed from devout Catholics into rank Modernists. Soon the days of Brother Andre and the holy saintly nuns of Catholic Quebec would be gone.

The new spiritual poison of Modernism, injected into Canada in the 40s and 50s, led to the "Quiet Revolution", that would result in the near complete demolition of the Catholic Church within a few short years. By the late 1960s, Quebec was a hive of radicalism and secularism.

What invading, foreign protestants could not achieve in 200 years, apostate Quebecois achieved in less than 10 years. Quebec had fallen from a Catholic bastion to the most virulently secular and anti-clerical state in all of North America.

The Quiet Revolution produced such deviant, apostate politicians and business leaders as: Pierre Elliot Trudeau, Rene Levesque, Jean Chretien, Marc Lalonde, Jacques Parizeau, Lucien Bouchard, Paul Demarais, Brian Mulroney, Gilles Duceppe, Paul Martin, Francois Legault...and the list of goes on and on.... and now: Justin Trudeau.  Justin of "Canada 2020" and the godless globalism. Make no mistake friends, politics always comes down to religion, and the ultimate question asked by Christ: “whom do you say I am"? (Matt 16:13).

Trudeau Junior, is, in fact, so demonic, so viciously anti-Christian, that even his wayward father would blush with shame. But here we are.

Today, is a day that will live in infamy, along with the dark days that legalized pornography, abortion, sodomy and euthanasia.

Today, homosexual activity is officially glorified on a one dollar coin, issued from the Royal Canadian Mint.

What can I say? What words are fitting for this spiritual crime, this blasphemy against God?


"Whosoever therefore resisteth the power, resisteth the ordinance of God: and they that resist shall receive to themselves damnation".
(Rm 13:2)

In fact, God is only damning Canada, because Canadians wish it to be so, as they are "resisting" His power, His "ordinance". Just as a man throws himself in Hell of his own choosing, so Canadians, through apathy, stupidity, indifference, hedonism, heresy and a pure hatred of God, are calling down His judgement.

God will not be mocked (Gal 6:7). How many abortions have taken place in this country? God is a just God. Just as the stiff necked Jews were punished and sent into exile in Babylon, so too Canada will be punished.

Do Canadians want to be damned? It seems so. There is constant promotion and even the glorification of sin. "He that soweth iniquity shall reap evils, and with the rod of his anger he shall be consumed." (Proverbs 22:8).

If this continues without public repentance and reparation, God will damn this country to which once so much was given. Canada was once a Catholic Nation. Now, she is in the forefront of vicious, anti-Catholic neo-pagan totalitarian States.

The question is: are we going to hear from Canada's bishops? What they do, or do not do, will tell us not only who they are, but where this country is headed in the future. The silence of Canada's bishops only signals a further descent into darkness.
Posted by Barona at 20:33

You will get criticized for your title, but to me it rings true. And we may well end up adding America to the list, if Americans are so hell bound as to elect a Democrat to the White House in 2020, because American democrats are raving savages who butcher babies as a sacrament, and celebrate the murder of about to be born infants, who rejoice at every disordered sin including sodomy, and force it on helpless children, who wink at child molesting, and all manner of vice and evil. The West has already imported the means of their own suffering and destruction. The leaders of our church today are Kings of Hell, leading the church and so many Catholics to destruction. They will lead the parade into the gaping yaw, as the artist Hieronymus Bosch depicted.

When that black parson said a few years ago "God damn America", he was correct, but for the wrong reasons. America has been damned since Roe v Wade. And she is getting worse, much worse. If we compare the moral of the United States to where she was 40 years ago, the difference is staggering. The whole West, without exception is imploding, since they have rejected Christ, and insist on building on quicksand. I do not place my trust in Princes and Donald Trump though he has appointed a few decent judges has, in general been a disappointment. There is no Wall, yet the "Hillary Doctrine" was passed last year in a Republican controlled House and Senate. There is also the question of US foreign policy being directed by Zionists and so-called evangelical "Christian Zionists" who are not Christian at all, but Darbyites. If these evangelicals spent more time fighting abortion instead of promoting and excusing Israel perhaps abortion would be gone by now. But they seem to have no problem with calling Netanyahu a personal friend, though he is pro-abortion and pro-gay. An evil man who gloated about the staging of gay pride parades in the Holy City! Interesting friend they have.

There are many disgusted Americans who will not vote this time around. The Wall has not, and will not be built. Wars are continuing and Trump's promises to pull out of foreign meddling have not been realized(probably because he is being blackmailed by foreign intelligence agencies). Middle America is not going to be fooled again and dragged into unending foreign wars for the advancement of globalism and various evil ideologies that reject the Divinity of Christ. There will be many American who will not vote in 2020; mark my words, friends.

Ultimately the blame goes on the churchmen. They refuse to preach Christ Crucified. They refuse to use the graces God has given them. Far too many are freemasons in spirit (if not also in fact), far too many are homosexuals, deviants, non-believers, heretics. They have hi-jacked the human institutions of the Church to do the devil's work.

If the Pope were any other man, he would have already been arrested and charged with running an international pedophile ring. But he has not been. He gets away with it. His clerical abusers flee from one country to another using diplomatic passports. It is unbelievable. These men are not being arrested because they are doing the dirty work of the enemies of Christ; demolishing the Church from within. One can only imagine the joy of secularists, freemasons, and other enemies of the Gospel as they see the churchmen wrecking Herself from within. No wonder they sit back and do nothing! They are rejoicing: the Catholic Church being humiliated and mocked before the masses brought about the very men who should be the heralds of the Gospel!

Much of the problem with our churchmen is, simply, lack of belief. You can say you believe something without actually believing it, if you understand what I mean.

However, part of the problem is the papacy. I've said it before, and I will say it again. We have given far too much power to the pope. Treating him as we do now, as an absolute monarch, is problematic.

I am Canadian. Please do not call the wrath of God down upon my country, as my country is not me, nor is it those who dissent from the evil of progressive liberal leftist politicians. I am appalled and upset by this execrable act of affirming evil acts, and placing such a filthy affirmation into circulation as a medium of monetary exchange.

I will hand back to any merchant this filthy coin if it is offered to me.

Barona and I are Canadian too. Sadly, Canada deserves this punishment. Get out while you still can. But there is nowhere to escape punishment.

The problem is that post-modern society no longer fears God. We worship sex, self, materialism and the state.

... We worship everything but God.