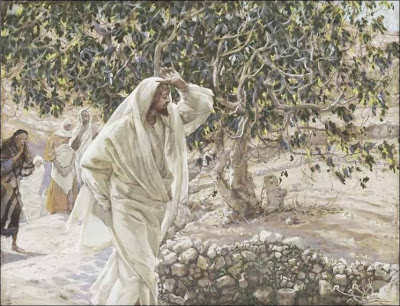 This morning, also, Jesus goes with his Disciples to Jerusalem. He is fasting, for the Gospel tells us, that he was hungry [St Matth. xxi. 18]. He approaches a fig-tree, which is by the way-side; but finds nothing on it, save leaves only. Jesus, wishing to give us an instruction, curses the fig-tree, which immediately withers away. He would hereby teach us what they are to expect, who have nothing but good desires, and never produce in themselves the fruit of a real conversion. Nor is the allusion to Jerusalem less evident. This City is zealous for the exterior of Divine Worship; but her heart is hard and obstinate, and she is plotting, at this very hour, the death of the Son of God.

The greater portion of the day is spent in the Temple, where Jesus holds long conversations with the Chief Priests and Ancients of the people. His language to them is stronger than ever, and triumphs over all their captious questions. It is principally in the Gospel of St. Matthew [Chapters xxi. xxii. and xxiii.] that we shall find these answers of our Redeemer, which so energetically accuse the Jews of their sin of rejecting the Messias, and so plainly foretell the punishment their sin is to bring after it.

At length, Jesus leaves the Temple, and takes the road that leads to Bethania. Having come as far as Mount Olivet, which commands a view of Jerusalem, he sits down, and rests awhile. The Disciples make this an opportunity for asking him, how soon the chastisements he has been speaking of in the Temple will come upon the City. His answer comprises two events: the destruction of Jerusalem, and the final destruction of the world. He thus teaches them that the first is a figure of the second. The time when each is to happen, is to be when the measure of iniquity is filled up. But, with regard to the chastisement that is to befall Jerusalem, he gives this more definite answer: 'Amen I say to you: this generation shall not pass, till all these things be done.' [St Matth. xxiv 34.] History tells us how this prophecy of Jesus was fulfilled: forty years had scarcely elapsed after his Ascension when the Roman army encamped on this very place where he is now speaking to his Disciples, and laid siege to the ungrateful and wicked City. After giving a prophetic description of that Last Judgment, which is to rectify all the unjust judgments of men, he leaves Mount Olivet, returns to Bethania, and consoles the anxious heart of his most holy Mother.

The Station, at Rome, is in the Church of Saint Praxedes. It was in this Church, that Pope Paschal the Second, in the 9th century, placed two thousand three hundred bodies of holy Martyrs, which he had ordered to be taken out of the Catacombs. The Pillar, to which our Saviour was tied during his scourging, is also here.

From Dom Prosper Gueranger's commentary on Monday in Holy Week in The Liturgical Year.
Posted by Irenaeus at 07:00