Sacrilege at St. Joseph's Parish in Ottawa: illicit matter is being used for "hosts" for "Mass"

It has been brought to the attention of this blog, that St. Joseph's parish, in Ottawa is using illicit matter for hosts at Mass. An email (see above) confirms that illicit "wheat free..." wafers are being used for those faithful who suffer from Celiac Disease. The practice at St. Joseph's is to consecrate valid hosts, whilst at the same Mass also simulating the non-consecration of "wheat free..." wafers.

The use of illicit matter renders such Masses sacrilegious and blasphemous.

This is an abomination. The gravity of this spiritual crime cannot be underestimated.

The Consecration of valid hosts is mocked and profaned with the invalid wafers lying alongside on the Altar. The faithful are deprived of the Real Presence and objectively tricked into worshiping a mere piece of food.

For the valid consecration of the host, wheat MUST be used. And wheat ONLY.

Can.  924 §1. The most holy eucharistic sacrifice must be offered with bread and with wine in which a little water must be mixed.

§2. The bread must be only wheat and recently made so that there is no danger of spoiling.

How long has this abomination been going on for?

How long have the faithful been given a wafer made of rice and potato starch to worship as the "Real Presence"?

Are there other parishes across Canada that hold such sacrilegious and blasphemous "Masses"?

If one parish is doing it, could not others? If only illicit matter is used for a "Mass", it would be rendered completely invalid.

Catholics have a right to know

The Archbishop of Ottawa can be reached at:

The Papal Nuncio can be reached at:


An example of a "gluten free, wheat free.." illicit "wafer". 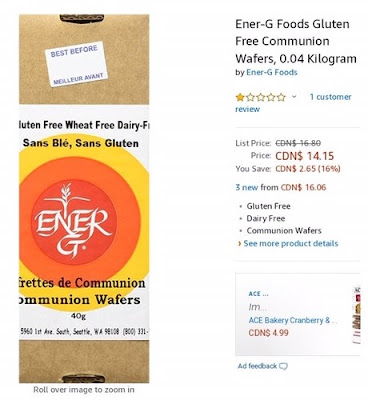 The solution is very simple. Those faithful who suffer from Celiac Disease can be given the Precious Blood from a small chalice.
Posted by Barona at 14:23

"The solution is very simple. Those faithful who suffer from Celiac Disease can be given the Precious Blood from a small chalice."

Better yet, they can receive low-gluten hosts that are both valid, and have so little gluten, as to not trigger a reaction. I know, from personal experience, this is both available, and eliminates the issue.

The problems at St. Joseph's seem far-reaching. Women's ordination is also supported by at least one parishioner there.