The Catholic Register removes article on Roisca plagiarism: WHY? 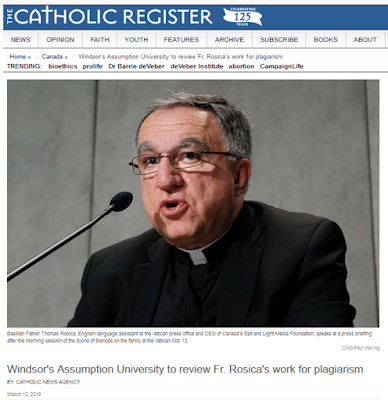 In the past few weeks it has become quite well known that the prominent American-Canadian priest, Fr. Thomas Rosica C.S.B., presently the CEO of Salt and Light, Vatican English language Spokesman, and media contact for the Basilian's scandal ridden, St. Michael's College School, has been engaging in habitual plagiarism, seemingly dating back at least 30 years.

Rosica was originally exposed as a plagiarizer in 2015 on Vox Cantoris.

And who can forget "Chalicegate"? Why is this important? Because it shows contempt for the truth.


Until a few hours ago, the Archdiocese of Toronto's official newspaper, "The Catholic Register", carried the following article from Catholic News Agency. The article included the following revelation about Rosica:


In recent weeks, the priest has come under fire amid revelations of extensive plagiarism in his published articles, books, and speeches.


However, the article has now been removed from The Catholic Register's website. Why?

I will say this: any academic, or journalist caught in the type of plagiarism that Rosica has engaged in, would be dismissed. In fact, far, far lesser acts of plagiarism would entail dismissal. A student caught, would, at minimum, be failed, or expelled.

In academia, even to indirectly reference oneself, necessitates a reference to the original source. Not to do so, constitutes plagiarism. Universities still take cheating very seriously. Evidently, there are those occupying powerful positions in the Catholic Church who do not. This is a very, very grave issue.

It reflects a complete contempt for truth, encased in the most horrible manifestation of clericalism.

For the latest updates as further plagiarism is being exposed on a regular basis, readers should follow the Twitter Feeds of American philosophy Professor, Josh Hochschild, and Mathew Adam Block of the Canadian Lutheran magazine.

I had hoped not to blog about this issue. Unfortunately, Fr. Rosica, and those who seem to be enabling him, continue to make it an issue. A very serious issue. Truth is being bandied about, mocked. No, truth is very, very important.
Posted by Barona at 11:06

We know Tom has a temper and is prone to lashing out at the slightest provocation. We saw it with Vox and Fox Cantoris. We saw it with Bella. Will we see it with the Catholic Register?

We also saw horrendous abuse on the Chinese Catholics. My understanding is these good people ended up with legal bills in the vicinity of $500,000.

The Catholic Register has a decades long tradition of ... only printing fake news. TS

Indeed, TS. Gone are the days of Larry Henderson, when the Register printed some decent material.