Massimo Faggioli blames the victims: ""abuse crisis was caused by... the VAST GREY AREA between victims and abusers" 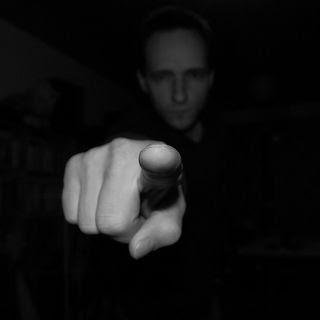 It is not enough that boys (and a few girls) have been systematically sodomized, sexually abused by infiltrator priests, bishops and cardinals.

It is not enough that hands consecrated to God and the offering of the Mass, have been used to manipulate in mastubatory horror, the genitals of children and youth.

It is not enough that these infiltrators have blasphemed, committed sacrilege, have engaged in the demonic abuse of children.

It is not enough these infiltrators live off the widow's mite - many in opulence.

It is not enough these infiltrators have devoted their lives to destroying innocent lives....

Now we Massimo Faggioli coming out and blaming the victims. And in perfect timing, the day before the Pedophile Summit. 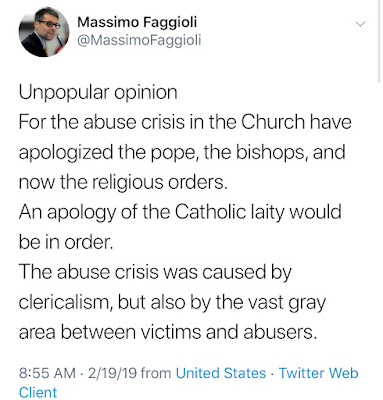 Imagine if a journalist proclaimed that Harvey Weinstein's sexual predation upon women was also caused by a "vast grey area...".

The implication of a "grey area" is that the victim - the VICTIM !!!! - is not a victim, but a co-actor in the sexual perversion.

Here we have Faggioli daring to even suggest that boys (and a few girls) are somehow involved in seducing priests and bishops. And that these holy men just cannot resist the seduction. Little boys having nothing better to do than - wait for it - become versed in homosexual activity - and then turn their new found "skills" upon hapless priests and bishops. This is what we are being told!!


Faggioli may not realize it, but little boys are interested in sports, airplanes, being firemen, etc. They are not interested in sodomy, because they do not know that this particular sin even exists. As I think back, I only heard about homosexuality at about the age of 15, 16 - and only because militant homosexuals were on the local news here in Toronto, agitating for acceptance.  Yet, even then, thank God, I did not actually know what a homosexual was. All I knew is that there were strange men who actually kissed each other on the lips. Repulsive, sickening....

As to the depths of homosexual depravity, I was probably was well into my thirties when I listened to a lecture by Fr. John O'Connor and learnt about the sad addictions these people engage in. Simply put: these activities are unnatural and just as one would not reflect that two and two make five, one would not reflect upon sexual activity between mand and man, or woman and woman.

Will Massimo Faggioli survive this outrageous slandering of the victims?

Will Villanova University dismiss him?

I very much doubt it. This will tell more about Villanova then it will about Faggioli.

This is the power of the homosexual juggernaut. Cardinals Brandmuller and Burke have already warned us the other day: the raping of children is about a loss of Faith. Archbishop Vigano warned us months ago: there is a powerful, entrenched homosexual network that has no intention of relinquishing power.

But God is God, and these infiltrators are mere mortals. They will not destroy His Church.

Let us remain calm and prayerful. Let us not allow this summit or any other scandal to unnerve us, undermine our Faith. We need to get to Heaven, that is our primary duty. Let us not allow sinful men to obstruct our journey to the Father's House.
Posted by Barona at 09:17

Cupich said something similar - that the problem is that "the people" have not been properly trained. Meaning, ignorant parents and poorly trained adolescents are partly responsible for their abuse.