The Vatican infiltrated by Freemasonry? 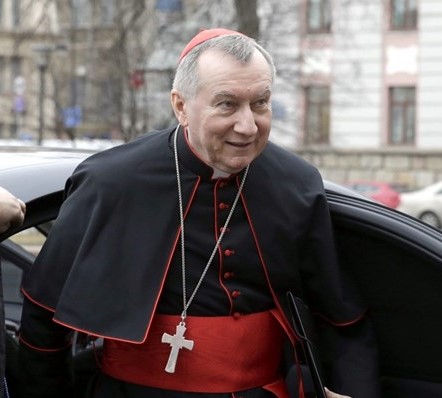 Archbishop Stanisław Gądecki stated on his blog, just over two years ago, regarding the meetings at the Synod of the Family, that the spirit of freemasonry was afoot amongst many of the bishops with regards to dialogue, and their secular view of the world:

"the dialogue on human rights is from the point of view of the illuminati of the 19th century."

Dear friends, I ask you to reconsider these words by the Archbishop taking into consideration the release of the materially heretical "Amoris Latitia", the various scandalous statements coming from Rome, the ongoing homosexual crisis in the clergy (are Freemasons using homosexual clergy to advance the destruction of the Church?), the strange statements by churchmen to politicians and at the UN, etc.

I ask you to seriously consider the role and influence of Freemasonry, considering the recent announcements of the Secretary of State, Cardinal Parolin about the "church of the new paradigm".  Just what is this "church" the eminent Cardinal speaks of? A protestant "church"? masonic "church"?

Whether Cardinal Parolin wears the apron, we do not know. What we do know is he speaks and acts like a Freemason. We know, as the day to day manager of the Church, he sits back and does nothing as the destroyers run free.

International Freemasonry has sought to infiltrate the Catholic Church for decades. Can we forget the Alta Vendita, or the marches of Freemasons in Rome during 1917, where a young Fr. Maximilian Kolbe reported that the Freemasons boasted of infiltrating the Vatican and turning the Pope into their "errand boy"? Can Catholics forget the power of the P2 Lodge, that contained the names of high ranking churchmen?

"The enemy forces, inspired by the evil spirit, ever wage war on the Christian name...the Masonic sect, which, strong in manpower and resources, is the leader in a war against anything sacred". Pope Leo XIII (Inimica Vis)

Let us not be deluded: Our Lord Jesus Christ has real enemies. These Masons have infiltrated the Church. The devil uses every trick in the book to lie and deceive us: Judaism and its offspring, Islam, political Zionism, Liberalism, Socialism, Communism, Capitalism, Globalism, Protestantism, Ecumenism, Environmentalism, Religious Liberty, the Occult, the Sexual Revolution - and so on. The devil never runs out of lies to deceive.

I can now report that during the Morning  Session discussions of Group A (Italicus) on October 8th, 2015, the influence of Freemasonry was raised. The  incident was recorded by Archbishop Stanisław Gądecki on his blog. The fact that Synod Fathers are raising the issue of Freemasonry helps explain the blasphemies, the heresies, the cloud of dark confusion and evil that surrounds the machinations of a group of churchmen intent on overturning the unchangeable teaching of Our Lord Jesus Christ on Holy Matrimony and human sexuality.

Specifically, Archbishop Gądecki noted that there were Synod Fathers in Italicus A who were concerned that  the spirit of masonic influence had infected sections of  the Instrumentum Laboris.

It is very reasonable to consider that the spirit of Antichrist dwells in the hearts and souls of some of the men who stroll the marble halls of Vatican City. False shepherds, wolves in sheep's clothing, seeking to lead the Flock astray. Vade retro me Satana!

From the Archbishop's blog:

"Dialogue on human rights is the point of view of the illuminati of the 19th century; where is the theology? Where are the Rights of God?  Instead of the work of creation, we have talk about ecology".


Members of Italicus A:

Seems to me, Archbishop Gadecki was maybe trying to tell us something?.....It would seem so as everything that has gone on in the past 5 years points to it.

Without the benefit of a membership list, and relying on the faith that the man professes, I conclude that the papal claimant is a Freemason. I will henceforth treat his Magisterium as Freemasonry, of which I cannot be a member on pain of excommunication. Until such time as there is a valid Papal claimant, I am ignoring anything that has come from the Church since Vatican II and will Catholic on. I’d love to see him, along with his brother Masons, brought to justice this side of Heaven.

According to Franco Bellegrandi, in his book "NikitaRoncalli," Roncalli, a socialist sympathizer, was initiated into the Lodge while Apostolic Nuncio to Turkey in the 1930s. His election in 1958 was also predicted beforehand by a Freemason, according to this same book. Abp. Lefebvre was once asked if Montini was a Freemason, and he replied "It doesn't matter - he thinks like one." John Paul I was allegedly about to expose 100+ Masons in the Curia when he died suddenly and mysteriously. Malachi Martin, I believe, stated that there were several Masonic Lodges active in the Vatican. So....Illuminati/Masonic point of view present in the Instrumentum Laboris? No surprise there....their agents are apparently the satanic vessel of election for the Passion of the Church.

Question:
Does Cdl. Parolin fit any prophecy about the antichrist? He makes my skin crawl even worse than Bergoglio.

The problem is that Western so-called traditional websites do not know and do not want to know what is happening in Poland. Therefore, they are even keen to recognise a notorious promotor of post-Conciliar revolution as some kind of hero. Abp Gadecki is one of the authors of the innovative event in Polish churches (imposed by post-Conciliar prelates about 20 years ago) known as Day of (Talmudic) Judaism. In the diocese of abp Gadecki that Day has since then evolved into the week. Beware of false prophets.

I do not believe Capitalism nor Environmentalism deserve to be on the list of Satan's tools. Capitalism, properly implemented, has given the West the best standard of living in the world, allowing it's adherents to rise to a far higher standard of living than any other system. In my own family, my grandfather was born in Cork, a dairy farmer and stonemason in America. His son was a laborer. His grandson was a draftsman who put on a suit and tie and went to work. His great grandson is currently a wealthy developer and builder of upscale homes. Name any other system of economics that has enabled that type of success story in the world.
Environmentalism has taken on an odor due to adherents misplaced priorities, but it has it's place, properly understood.

Why would Freemason's want to infiltrate the Church; what is there to gain? I am a Freemason and not against Christianity or the Church, we believe in a Supreme Being and a Brother Master Mason may join any religion.

Thank you for addressing the issue of the freemasonic influence in the Church. I don't think you need a question mark after your title. It has infiltrated, a long time ago. It is a fait accompli that freemasonry has not only infiltrated but taken over. This makes the concerns reported by Gadecki seem strange. It's a little late in the game to be merely "concerned." We need bishop martyrs more than anything right now. Ones willing to lose all (status and even bodily well-being) in stating the Truth about what is happening in the Church today.