Why are churchmen promoting the antichrist "holiday" of Kwanzaa? 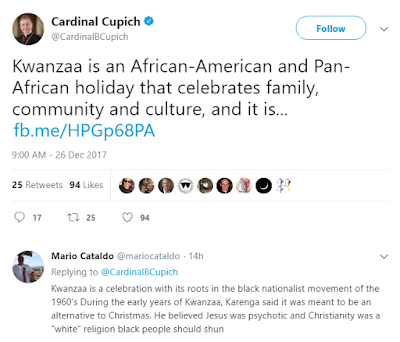 A contrived, anti-Christian "holiday", so-called "Kwanzaa" began yesterday. It was created by a convicted criminal, a woman torturer and communist, Ronald McKinley Everett (aka: Maulana Karenga). A terrorist and violent criminal, Everett created a de facto rascist "holiday" which was to piggy back during the Christmas Season.

That which rightly takes away from Jesus Christ is antichrist. As a communist, Everett openly boasted of his racialist "holiday" as an attack on Our Lord Jesus Christ. It is one thing to see a communist openly advocate an anti-Christian holiday, it is quite something else to see churchmen support it.

Pray for the conversion of deluded churchmen who pander to false "mis-leaders" such as Everett.

Cupich is a knee-jerk, robotic Lefty who has filtered out anything but Lefty slogans for his entire adult life. He is a walking, talking, grinning Lefty zombie.

The only racism I have ever seen has come from wealthy white liberals. They are the worst, the very ones who try the hardest to convince you of their "blindness" to race and color! They are actually the ones who see race the most.
We never hear of Kwanzaa anymore, because like wearing dashiki's in the 60's, it was eventually seen as lame and pretty much abandoned. Only warmed over 60's rebels would think of it at all, or pandering white liberal clergy, who have not realized that Kwanzaa is properly dead. Our church leaders continue to believe that the Truth of Jesus Christ and the proper worship of Him is enough to draw in people. They believe you have to offer bread and circuses, pander to ethnicity, in order to attack people. What fools.

Cupich doesn't have a Catholic bone in his body.