Anglicans in London have a new "bishop". Well, not exactly: they have a new "bishopess". Sarah Mullally, the former Chief Nursing Officer for all of England, somehow  has managed to be selected by the extremely wealthy, elitist, establishment, white cabal that run the apostate Church of England.

Chief Nursing Officer Mullally, a dyed "blonde" and silk-wearing parsoness, will now be London's first "bishopess", furthering the lies and deception that has befallen the apostate Church of England, since that sad day, when the mini Antichrist, Henry the 8th, along with his henchman, Archbishop Thomas Cramner (deposed for heresy, as is still noted on the wall in Westminster Cathedral), tore England and Wales away from the one, true Church of Christ.

"And the bloody church of England, in chains of history,
Requests your earthly presence at the vicarage for tea"

Chief Nursing Officer Mullally, represents all that dissenting churchmen in the Catholic Church desire of a bishop. To quote Jim Hacker, they hanker for clergy-persons as bishops who are "a cross between a socialite and a socialist". 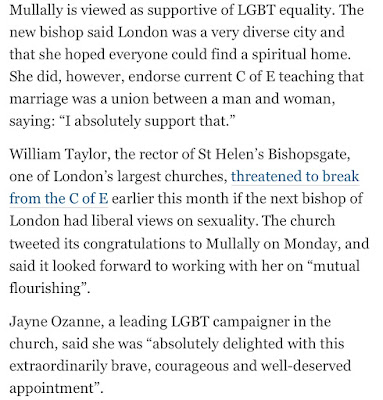 Sarah Mullally is being equated to the new Archbishop of Paris Archbishop by Archbishop Mark Coleridge. His Tweet has been re-tweeted by Fr. Thomas Rosica, CSB. Do not these two men know that the Church declared Anglican Orders invalid? Do they not know that St. Pope John Paul II declared the Church teaching that a woman cannot be ordained is infallible and to be held by all the faithful? These men are cunning, subtle, dissenters.

Not one word from Coleridge or Rosica that Chief Nursing Officer Mullally lives in darkness, error and lies. Not one word pointing out that she is but a lay woman. Not one word from these men for her to recant, convert to Christ's one, true Church and live a quiet, humble life. But then, it would require that they do so as well. Giving up the jet-set life: now, that would be the beginning of conversion!

Are we really that surprised? Did you see that new youth edition Fr. Rosica put out?