The Synagogue of Satan destroys Catholic property in Jerusalem 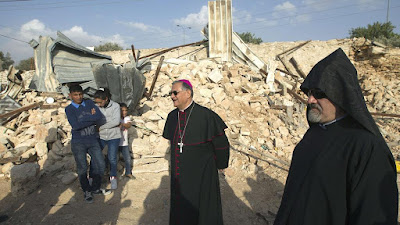 Patriarch Fouad Tawwal has denounced the Zionist State of Israel. The anti-Christ so-called "Jewish" State destroyed property that belongs to the Latin patriarchate of the Catholic Church.

Today, we celebrate the Martyrdom of St. Stephen, murdered by hate-filled members of the Synagogue of Satan. This hatred has not changed. Indeed, it has intensified over the centuries, as Satan works with even greater skill to make God's once Chosen people, his chosen people. Just as the Jewish people rejected the Messiah when He came, so they will accept the Antichrist as their Messiah when he comes. God's once chosen people, will become Satan's chosen people. Lucifer awaits with delight the day he can gloat before God that the Jews have rejected Him, and accepted Lucifer's Antichrist instead. Indeed, we can see prefigurements of this in the Old Testament: the Golden Calf, the killing of the Prophets...

We should never forget that Our Lord himself is Jewish. This fact, identifies the Jews for a special hatred from Lucifer, as he can never forgive the fact that a few loyal Jews - especially Our Blessed Mother (the Lily of Israel), St. Joseph and the Apostles - against the hatred of the Pharisees and Scribes - managed to bring about Redemption. The Jews are therefore in the greatest of dangers. As Jewish control increases over "Israel" and Jerusalem, all of this is preparing the day when the Antichrist will march into the Holy City and demand that the Jews fall down and worship him.

Though the Synagogue is filled with hatred, the Catholic response must be that of St. Stephen. In prayer for these deluded people, we pray that their conversion will soon be at hand. If they refuse to convert they face a horrible future at the hands of Antichrist. St. Paul - the great Jewish convert - warns us that we are fighting powers and principalities of darkness.

The two great forces of darkness are presently at work to bring about the reign of Antichrist. The Jewish Nation - to the degree they are in accord with the teachings of the rabbis and the Talmud - is the primary agent of darkness. The secondary force is international Freemasonry. Over the centuries, these two forces have manipulated, encouraged, given birth to any and every organized force opposed to Christ and His Church.  We see this in Simeon the Magician, a Jewish gnostic in the Book of Acts. We see it in Islam, and the huge influence the Talmud and Jewish ritual has upon Islam. We see it in Freemasonry with Jewish and gnostic symbolism and rituals. We see it in socialism, communism, capitalism, fascism, etc. In sum, we see the forces of darkness at work wherever there is not Our Lord Jesus Christ.

During this Christmas do not forget to pray for the conversion of Jews and Freemasons.

Email ThisBlogThis!Share to TwitterShare to FacebookShare to Pinterest
Labels: Crisis in the Church, The Persecuted Church, Zionism

Well said! If you can recommend any reading about the connections between the Talmud and Islam, I would be very interested.

Please know that the Latin Patriarch of Jerusalem is protected by the Jewish Israeli Army.

Also, please know that Israel is the only country in the Middle East that guarantees 'freedom of religion' for all - including Roman Catholics.

As well, the most consistent and dependable friend of persecuted Middle Eastern Christians is Israel.

Lastly, should you claim to be Christian and, as such, desire the conversion of Jewish People - please know that the greatest impediment to this evangelical task is the unseemly and vicious hatred spewed at the Jewish People by people who call themselves "Christian".

And before you attempt to accuse me, I am no effeminent modernist - and take Jesus at His Word in taking the Good News of the Gospel to every nation on earth. As priest, evangelist and missionary, then, I guarantee that you will never win a single convert to Catholicism from the Jewish Faith, should these poor eternally-persecuted people conclude, once again and very sadly, that Christians are hypocrites - as they are so full of hatred for Jews.

Your language is odious and repellent - and reminds me of anti-Semitic literature disseminated in Nazi Germany.

Conversely, if you genuinely loved - and proved your Christian love - to the Jewish People, they might listen to us.

I say - very emphatically - that you should first convert to the authentic Catholic Faith yourself - before you ask the Jewish People to convert.

Once again - as a priest - your foul hatred makes my evangelical efforts immeasurably more difficult.

I will pray for your conversion.

In Christ our Lord,

As a priest: will you DENOUNCE the ADL? Will you denounce the World Jewish COngress? Will you denounce AIPAC? Will you support those very few decent Jews who reject the racist, Zionist State of Israel? Men who had the courage the protest the visits to New York City of such hateful bigots and fascists such as Benjamin Netanyahu? Will you, as a priest of Jesus Christ denounce from the pulpit the Unites States giving billions in taxpayers money to a State that is already VERY wealthy, and is - moreover - backed by mighty Jewish billionaires? American Marines have to pay for their own toilet paper, yet the US payrolls the Israeli WAR MACHINE!

Israel has NO RIGHT to exist. If you knew your history, you would know that Palestine was invaded in 1947-48 by foreigners from Europe who machined-gunned entire populations. Irgun, Stwrn and Hagganah were all vicious Jewish terrorist groups. I knew a good friend who lived in Palestine during the War. Nazareth was Christian. Not anymore. This "poor persecuted" people do very well for themselves in controlling the United States of America, Canada, western Europe, the mass media, Hollywood, finance, Wall Street, etc. As a priest with an Irish name you should be more sympathetic to Nations that have had their land invaded and the native population reduced to slavery and pauperism.

Your entire comment has been an ad hominem attack and no refutation of ONE point that I have made, or in any other posts I have made.

Let there be no misunderstanding: with the Crucifixion of Our Lord, God's once chosen people, became and remain the Synagogue of Satan, until their conversion to the Catholic Church (which is now Israel).

I pray for your conversion.

I just read Fr Duffy's comment here. You may not be effeminate ,but you sure defend that which you know nothing about morally !

As a Catholic Christian women , I was treated like a prostitute by every Jewish man in every Jewish owned business I had the misfortune to be hired by. My mother had the same experiences in NYC when she was young and employed there. Now my youngest has discovered the same sad reality for herself in three different businesses. FYI we all dress modestly but it makes no difference . There is an underlying message for every Shiksa and that is, if you are a gentile woman we consider you a whore.
The same is the "(O)" ,or oral tradition in the Talmud and it is too bad that you as a Catholic priest do not know this. Perhaps you might inspire genuine morality and respect in Catholic men and boys and start converting those whom you already think are just because they say they are "Catholic".
When have we heard men and boys being warned about the mortal sins of pornography or how to protect their own wives sister and women against such vile men from the pulpit ?
NEVER , because it is easier just to blame women for a man's lust.
BTW Father , they accuse Our Holy Mother of being a whore also in the Talmud.
Father please evangelize Catholics before you defend Jewish politicians in Jerusalem. Please.