"...between Joseph and God we do not see, and we can not see, anyone except Mary with her divine motherhood"
Pope Pius XI

"That he was always exempt from the inclinations of concupiscence-----a privilege with which St. Joseph by the merit of his purity, favors his devout clients by delivering them from carnal appetites".
St. Alphonsus de Liguori 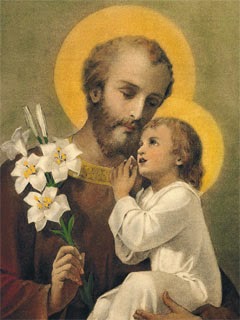 St. Joseph, most chaste and ever-virginal
Spouse of the Blessed Virgin Mary

The Church, and by extension, humanity is under severe demonic attack. When attacks comes from Catholics, especially confused Catholics, the danger is very grave. When it comes from those who claim some sort of "apostolate", this danger becomes critical. For a Catholic having an apostolate, and for that same apostolate to be in error; spiritual poison can easily by poured into men's souls.

So it is with Christopher West's strange interpretation of the Theology of the Body that is founded and developed from  "Miłość i Odpowiedzialność (Love and Responsibility) written by Karol Wojtyła, the man who would eventually become St. Pope John Paul II. It is a travesty that the holy Pope's doctrine is continually distorted in this manner.

It was not a few years ago that theologian, Alice von Hildebrand rightly critiqued the erroneous theories on sexuality by West, put forward with great vulgarity and a disregard of original sin and the need to treat human sexuality with “a humility, a spirit of reverence, and totally avoiding the vulgarity that he uses in his language.” Further, she stated: “I’m shocked and horrified by the words that he uses. His mere mention of Hugh Hefner is to my mind an abomination.”

Now what did our sainted Pope actually say (and the date, incidentally was actually August)? Here are his words:

"...the Holy Spirit, who had inspired Mary to choose virginity in view of the mystery of the Incarnation and who wanted the latter to come about in a family setting suited to the Child's growth, was quite able to instill in Joseph the ideal of virginity as well....

"It is instead a case of supposing that he was not an elderly man at the time, but that his interior perfection, the fruit of grace, led him to live his spousal relationship with Mary with virginal affection".

West further claims that: "St. Joseph was not an old man with no libido".

Let us keep in mind however the words of Our Lord: "But I say to you whosoever shall look on a woman to lust after her, hath already committed adultery with her in his heart" ( Mt 5:28); (CCC, 2528).  Further from the  Catechism of the Catholic Church: 2514:  "the ninth commandment forbids carnal concupiscence..."; 2517: "out of the heart come evil thoughts, murder, adultery, fornication..."  (c.f. 2529).  Erotic desires are lustful, sinful: West is claiming that the most chaste Spouse of the Blessed Virgin Mary was a sinner! What an insult to Almighty God that He would chose such a man to profane the Holy Mother of God. Once again, I say: blasphemy!

Pope Leo XIII, wrote these majestic words about the ever chaste St. Joseph:

But as Joseph has been united to the Blessed Virgin by the ties of marriage, it may not be doubted that he approached nearer than any to the eminent dignity by which the Mother of God surpasses so nobly all created natures...virgins at the same time find in him the model and protector of virginal integrity. (Quamquam Pluries). .

But there is a further point. West,  is claiming that "erotic desires" are normal (after all if the "just" man, the most chaste St. Joseph indulges in carnal sin -- is it even sin anymore in the eyes of West?). Is West trying to normalize, excuse lust by enmeshing it - impossibly - with the purity of spousal love within holy matrimony? This is like trying to have dry water; it is impossible. The fact is, purity comes from virtue and God's grace, and not from age. He is trying to claim that every male-female relationship must have a carnal, sexual component separated from the spiritual. This is an absolutely false and pernicious error. In fact, this proposition is part of "Gender Theory".

And it goes even further. Ultimately, West is claiming that unless one is Immaculately Conceived, one cannot live a pure and chaste life. Yet, he is contradicted by the innumerable people who live celibate, consecrated lives, and do so with the ordinary graces that God avails them. He is also contradicted by the innumerable wedded spouses that live chaste sexual Purity, chastity, virginity is possible, is real (more real than the marital act) and is lived by those who love God and His virginal Mother above all.

"In protecting and defending Mary's honor and virtue, he proved himself to be more and more worthy of her love. It is often said that true love must be built on sacrifice and a spirit of unselfishness. Never was this realized as well as in the case of Mary and Joseph. Consequently, their love and affection was more chaste and more pure and more human even if virginal, and precisely because it was virginal it was the more sublime! It is the greatest example to the world that love between a man and a woman built on the love of God, and concerned primarily about the laws of God, is the most enobling and the most rewarding type of love. It is the highest, truest, deepest understanding of the word love". (source).

The angel that appeared to our dear and Holy example of Fatherhood and Spousal love would have told St. Joseph much. Many things that he may not have understood but enough that he would have understood everything that he needed to. He understood that the womb of Mary was the new Tabernacle of the Most High. As he was not a Levite priest he was not fit to enter that tabernacle, the Holy of Holies and he did not.

Christoper West has failed again and is inventing his own theology.

Thank you for this.

Hmm, I haven't thought about this very much, but it's true that St. Joseph was given a special grace in his marriage. It's true that in the natural order of things a marriage without intimate relations doesn't work. I do know of a good Catholic couple who entered marriage intended not to include marital relations. It was between a devoutly Catholic handicapped man and a woman who wanted to be a nun, but couldn't. The marriage failed, and they were very very good people. In the normal course of events, I think the Church would say that intimate relations are the sign of the sacrament of marriage. Like in confession, one must confess a sin. It is the matter necessary for the sacrament to work. And if you haven't committed one recently, then you have to confess an old one, or there is no sacrament. I think the same is true of marriage. It exists when it is consummated. However, I truly believe that Joseph and Mary lived a happy life, and yes, I believe that Joseph was a young man -- probably a virgin as well. And I believe they did not have intimate relations, which are the norm for marriage. But this is a special grace.

Well I think St. Francis and St. Clare, and ST. Louis Marie de Montfort and Blessed Marie Louise Trichet may have had something similar, but they intelligently put Clare and Marie Louise in convents, or places separate from themselves. But consider the noble example of St. Chrysanthus and St. Daria, Martyrs. He was the son of a pagan Roman senator, who was horrified that his son was associating with Christians. He married him to one of the Roman Vestal Virgins St. Daria. Chrysanthus converted Daria and they entered a marriage of perpetual virginity. They were so young, so passionate about Christ, and they were apparently buried in sand and then stoned to death together. Married martyrs. Man, I love that story. So I guess what Christopher West is missing is that God can give extraordinary graces to ordinary people and they can live contrary to the normal course of events. God bless you. Susan Fox www.christsfaithfulwitness.com

The Church teaches that St. Joseph was perfectly chaste, receiving a singular gift to chastity. St. Francis and St.Clare though they did not have carnal relations, had a far greater love between each other than that of married couples. The simple reason being that with carnality removed they could see Christ far more clearly in each other. Hence their love of hearts was on a much higher love than a fleeting "love" (?) of bodies.

Dangerous clowns like Mr West will come and go and speak as they please because no Bishop has the courage - or indeed the sensus Catholicus - to shut him up.

While I found his words utterly infantile as well as repugnant I am glad you brought this to our attention.

With every good wish for the coming Easter Season...

theology of the body = a desperate attempt by the contemporary Church to make peace with the sexual revolution by creating more, rather than less, preoccupation with sex.

Being chaste doesn't mean not feeling any desire. St. Joseph was pure and chaste, and he did feel desire simply because he was a human being. John Paul II in his theology of the body does make a clear distinction between desire and concupiscence (or lust). You cannot live or teach chastity if you throw away the desire. This will only lead to sexual explosion. St. Joseph was chaste because he was able to direct his desires to a greater good : GOD. You cannot say he was chaste if he didn't feel desire in his flesh. Sorry.