The Ugandan fight for the family and civilization

Susan Fox at Christ's Faithful Witness has a remarkable post on the courage of the Uganadan nation that I think is well worth re-reading and reflecting on, now that the horror of the State/Mass-Media/Corporations sponsored abomination of the Nurembergian "World Pride" 2014 has past. God will not be mocked. Much hysteria against Africa (in truth a nasty neo-colonialism denounced by Pope Francis and leading African Bishops) has been generated in the media. However, near virtual silence on the active, and on-going campaign of extermination of Christians in the Middle East.

For the view of the Catholic Bishops Conference of Nigeria, please read here. 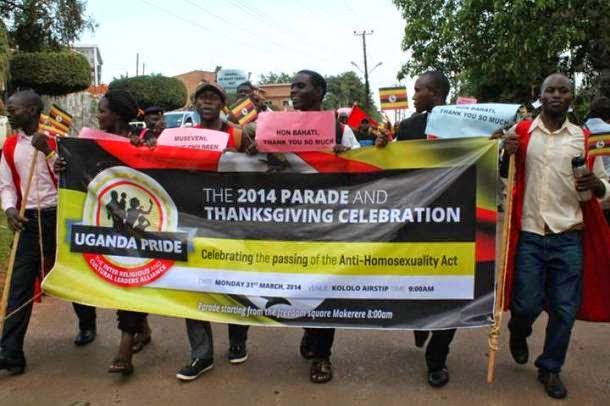 The last man standing on planet earth is likely to be a Ugandan.

At least that’s what the people of Uganda hope for in their struggle for family rights.

While legislation signed into law in February in Uganda was characterized as an “anti-gay” bill, what it really represented was the East African nation’s heart-felt belief that the family is the cradle of civilization, and sodomy only leads to death.

Their sentiments find a home in the thinking of Pope Saint John Paul II in his 1994 “Letter to Families” “Be human!” the pope said, emphasizing that the family is the “center and heart of the civilization of love.”

“The primordial model of the family is to be sought in God himself, in the Trinitarian mystery of his life. Man is created ‘from the very beginning’ as male and female: the life of all humanity — whether of small communities or of society as a whole — is marked by this primordial duality.” the pope said.

This message is totally lost on the unthinking West, which is gradually destroying the family and eliminating its own population through promiscuity, contraception, pornography, divorce, liberal education, so-called same-sex “marriage,” abortion and euthanasia. It’s materialism run amuck.


The full article may be read here.

Legislating morality is always a chancy proposition and usually entails seeing the state through rose coloured glasses. We in Canada have seen traditional morality and a socially conservative society transformed into a mecca of sexual liberation with the support of the state. Need I remind you that the House of Commons passed a bill supporting traditional marriage long before they threw the doors open to everything else. Jesus came as a suffering servant to be crucified, not as a conqueror to take over the Roman Empire and enforce the Beatitudes at the point of a sword. The Ugandan bill is a cruel and crude bludgeon at best wielded in fear and reaction against homosexuals and gay activism. If this post is meant to annoy, irritate or upset anyone then I want no part of it. I do not support bear baiting as an evangelistic tool.

This post is meant as something for people to go and read at its source, whilst we reflect further on the state of affairs in the State.

The larger issue is the neo-imperialist racialist attempt to regain control of the destinies of the African nations. Pope Francis has spoken about this....strange how neo-colonialists are silent on "gay rights" in Saudi Arabia et al. It all really is very contrived. Africa is mineral rich and these capitalist exploiters look to re-enslaving the Africans via the back-door of "human rights". All very sinister.

Ah Freyr, you didn't read the bill. To go to prison for homosexuality in Uganda for seven years, you must have two witnesses to the act. That is public indecency, not just a homosexual act. Certainly, Canada doesn't allow people to have sex in public?

The harshest penalties are for homosexual rape of of an invalid, child, drugged date, serial convictions of homosexual acts, or if you have sexual relations while carrying HIV AIDs. They have similar bills for heterosexual relations. But for some strange reason they divide them up into separate bills.

However, if you still do not agree, I had lunch last week with a NPR reporter (liberal National Public Radio), and told her about the story. She began the same rant you did, but I looked her in the eye and said, "Everyone has a right to a voice, and no one in the Western media fairly reported Uganda's point of view." She got quiet immediately recognizing that journalistic dictum as true. God bless you. Susan Fox www.christsfaithfulwitness
P.S. Witness, thanks for reposting the piece.