The fateful decision of July 15, 2014 by the General Synod of the Church of England to accept bishopesses has provided a Providential impetus for those Catholics of Anglican heritage to expand the missionary work amongst disaffected Anglicans who realize more and more the untenable position of the Church of England, given its abandonment of not only the Sacramental economy, but of basic biblical principles (e.g. same-sex "marriage, women priestesses etc.).

Msgr. Keith Newton, Ordinary of the Personal Ordinariate of Walsingham:

For many in the Church of England this will be a very happy day. Having agreed to permit women priests in 1992, the Church of England's decision today to allow women bishops is the next logical step. What is undeniable is that both developments make harder the position of those within the Church of England who still long for corporate unity with the Catholic and Orthodox Churches.
Pope Benedict XVl's decision to set up the ordinariates - allowing former Anglicans to enter the full communion of the Catholic Church, bringing with them much of the Anglican heritage and tradition - was made in response to repeated requests from Anglicans who longed for unity with the Catholic Church. It was a prophetic and generous ecumenical gesture because it demonstrated the possibility of unity of faith with diversity of expression. 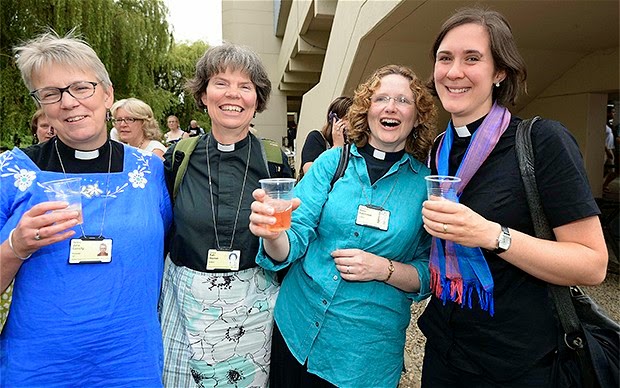 Note: Fr. Frederico Lombardi and Fr. Thomas Rosica (Lombardi's erstwhile English language assistant)  have been conspicuously unavailable for comment. However, they have been busy in twisting, denying and distorting the most recent interview given by Pope Francis. Perhaps because they do not like the frightening words uttered by the Pope?
Posted by Barona at 07:47