BREAKING: Archdiocese of Toronto CLOSES all churches ~ but booze and drug sales go on as "essential services"! 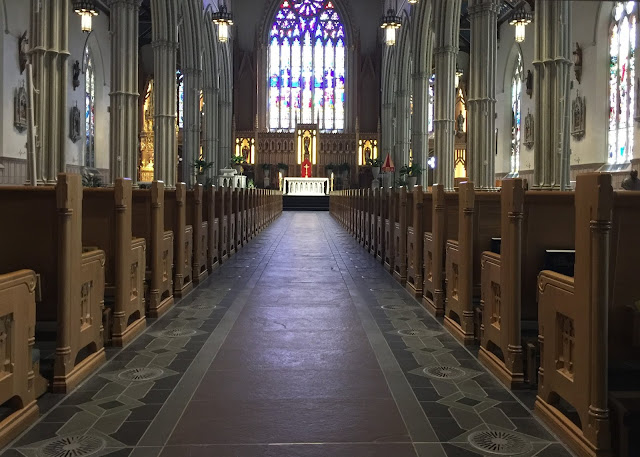 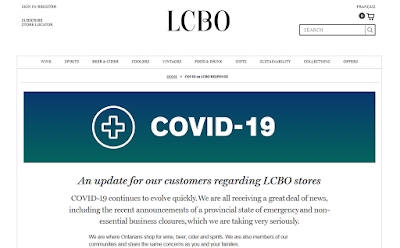 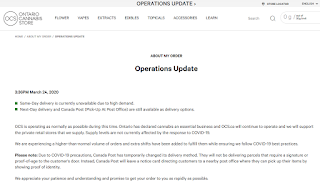 The sale of alcohol and drugs has been deemed an essential service by the Ontario government. This action is NOT based on science and reason, but on money. It's all about the tax dollars that are rolling in from the alcohol and drugs

The solution for alcoholics who can have serious withdrawal symptoms is simple: alcohol could be dispensed by an addictions specialist at designated locations under medical supervision. It's better for them, and it is safer for us.

And keeping open POT SHOPS?! Are they mad? What possibly could go wrong with that?

The Toronto Public Health is an absolute disgrace. Alcohol has sugar content, and lowers the immune system, besides affecting judgment. Beer Stores are notoriously unsanitary at the best of times.

Keeping open the Beer Store, when beer is available at the LCBO defies all logic, and exposes the insatiable lust for tax dollars. Readers from outside Ontario need to be aware that Ontario alcohol is marked up about 30% plus over market rates due to the State and corporate beer monopoly.

I shall share with you my experiences of visiting my parish.

Yesterday I was in my parish and there was one lady praying about 50-60 feet away from me, then another lady entered. She must have been about 30 feet away. She left, then I left, leaving only one parishioner. On Sunday when I went in the morning, there were two people just leaving, and upon entrance, two more praying. Other times I have been alone, or perhaps one other person.

So there we have it: there, my friends, is this great danger in our churches causing them to be immediately boarded up.

I would be interested to hear from other readers experiences in their parishes.

This is not science.

This is not even foolishness.

This is denying our Faith is essential.

UPATE: [2020-03-28 9:35 AM] Upon further investigation, I have confirmed that Premier Doug Ford DID ordered churches closed via his Provincial Chief Medical Officer of Health, David Williams, who decreed:

I am further advising Ontarians to avoid large gatherings of over 50 people. In addition, I am specifically requesting the closure of the following settings as soon as possible:

The directive seems to on the one hand advise against groups of 50+, but "specifically request" the closure of (e.g.) churches. Logically, this would imply that Williams believes that the "following settings" far exceed gatherings over 50. Or otherwise, why would he issue it? Be that as it may, Williams and Ford still believe that "enhanced measures" to protect Ontarians DOES NOT extend to liquor, beer, and pot shops. Hence this is an ideological closure, not scientific.

Unlike Premier Legault who was straightforward and honest: who ORDERED churches closed, Ford used a "request". But it was backed up by the police. They raided the SSPX here in Toronto. I confirmed this with a phone call to the parish.

What can then be said of Cardinal Collins? Why did he not telephone the Premier and inform him that Catholic churches remaining open would not be places of large gatherings, but only places of individual prayer, watched over carefully by each parish priest? This problem could have easily been solved. A quick phone call would have clarified what Catholics do, and that an open church is a far less dangerous place than a liquor or beer store, or a pot shop.

Why not (e.g.) keep a number of large churches open, with designated hours, and sign ups for Adoration of the Blessed Sacrament, that this pestilence pass? Each church would have a couple of ushers to maintain order etc. Even my local carpet shop is open: a sign clearly states "please do not enter if more than 2 customers are in the store".

We can only say that God has permitted this great tragedy to befall Toronto Catholics. Perhaps we should look in the mirror too, before we are overly harsh on our weak, cowardly Cardinal.

How many Catholics in Toronto have had abortions? How many use contraception? How many violate any of the Ten Commandments in a serious way? (And this definitely includes the sinful behaviour of Catholics on social media). We have the Cardinal we deserve. Let us pray to be scourged out of our complacency and laziness and have a Cupich "plus" replace the Archbishop within a few years. Then Catholics will begin to understand the price you pay for blindness and a lack of zeal for the Faith.

The Cardinal of Toronto has sent the following Letter on Tuesday, 24, 2020, to every pastor in Toronto:

Dear Father,
In order to assist in limiting the spread of the COVID-19 virus, we have already cancelled the public celebration of the sacraments, including the Eucharist. In view of the increased restrictions on public activity, I am now asking you to close your church and any chapel, even for individual prayer, effective immediately.
As of 11:59 p.m. Tuesday evening, parish offices should be closed to the public. Please make every effort to arrange for remote working arrangements for either the parish secretary or a parishioner who has the capacity to help organize and communicate with the faithful and to reach out to those isolated.
In Christ,
Thomas Cardinal Collins, Archbishop of Toronto

For information on making a Spiritual Communion: https://oratory-toronto.org/making-a-spiritual-communion/

For information on making a Perfect Act of Contrition - which is allowed by the Church in serious times: https://www.americaneedsfatima.org/Conversions/how-to-make-an-act-of-perfect-contrition.html

We need the best advice from virologists, doctors, and nurses; effective healthcare; contingent and long-term planning; political leadership; hard honesty; the co-operation of the public; and uncommon sense.

The mayor of London closed a number of Tube stations, causing the kind of crowding that will spread the virus. If these essential workers get Covid-19 we are in serious trouble. Armageddon.

The worst guess is that 50 per cent of people in Britain could be carrying the virus. This means we will be like Italy. Troops on the streets will be a necessity.

Many people in Britain are forgetting to comply with social distancing.
The danger is that men living apart from their children will visit the homes of their former partners, disobeying the Prime Minister's ruling.

Listen to a first-rate communicator. No waffle, no spin, no fumbling for words:

Be safe out there: Nigel Farage's message about the ongoing coronavirus outbreak. 23 March 2020. YouTube.

Don't want to panic you, but to ensure the safety of you and your family, and to get the message out in Toronto, please watch:

The doctor is Professor Hugh Montgomery whose area of expertise is intensive care.

Like many people I have been going into food shops for bread, milk, fresh fruit and vegetables. But I may soon rely solely on my home store of tinned food, tinned veg and fruit, and do without bread and milk.

A caring friend of my own age lives in Dunblane, Perthshire, and she has decided not to visit her Catholic church even though she will miss adoration before the Blessed Sacrament. Dunblane's R.C. church has no Mass now.

For years this woman has said the Rosary daily, linking up with her sister in Derbyshire, England, by telephone. They always end with the great prayer to Saint Michael. Margaret prays for my return to the Catholic Church.

The Lord wants us to protect ourselves, our families and neighbours. Taking such precautions is no different from crossing the busy roads with care, or avoiding dangerous places at night where we will be mugged.

I shall go out for my daily two or three hour walk, thanking God for my legs and the extraordinary gift of vision.

G.K. Chesterton wrote an essay on the beauty of grey skies. We get a lot of those in Scotland.

The world looks all the more beautiful when we accept our fate as temporary guests. Our real home is elsewhere.

We find signposts to Heaven all around us, if we walk in the Holy Spirit.