Attack on the Priesthood 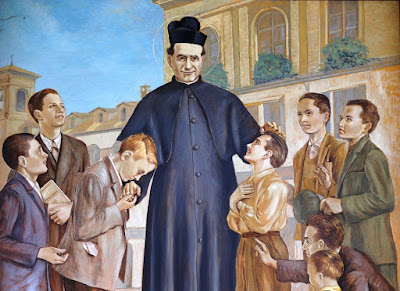 I am reading a life of St. John Bosco. Constantly, as I read and reflect, my mind comes back to the present day crisis in the priesthood, and the recent horrifying scandals. We should expect many more.

There was a passage in his biography that was striking. The saint had just been involved in assisting - with his boys - those who had been suffering from cholera. Such was the admiration that he was called upon to give retreats and preach sermons. His sermons were striking: simple, direct, never involving politics or issues of the day. Above all, St. John preached the Gospel through his way of life. In other words, holiness attracts!

The most powerful sermon is a holy life!

At one time the priest was a man admired, respected. This general respect, was near universal. The Catholic priest - excluding the Ku Kluxer, Orangeman or some other bigot - was held in the regard. This is seen even in sentimental films such as "Going My Way", or the "Bells of St, Mary's". One could trust your child, your son, your little boy with the priest. Priests knew that Don Bosco, St. Jean Vianney and others were the role models.

Contrast Don Bosco with these sad dissenters. Instead of preaching about removing the "wall" of sin around the soul, they want to preach about Mr. Trump's Wall; they want to get involved in partisan politics.

Instead of preaching on modesty, purity, against sexual sin, we have silence. If not silence, many are actually excusing sin itself. We even have priests who are going about excusing, if not advocating in favour of homosexuality.

Horrible as sexual abuse is, horrible as homosexual acts are, McCarrick and those like him have committed an even far worse sin: they have dragged the priesthood into disrepute before an unbelieving public; they have disgraced the priesthood, the Church, before non-believers. They are trotting out the priesthood to be mocked and scoffed at. The enemies of the Church want the public to turn against priests.

This Homosexual Network is a daily scourge on the backs of good priests who have to suffer the looks of distain from the public. They have bound the Church, so to speak, to a pillar, to be mocked, spat upon and degraded by passerby, just as Jesus was mocked and spat upon.

St. John Eudes warned us that the worst punishment that God could hand down to the Church is bad priests. God is mysteriously allowing these evil men their moment, so that He can draw greater good out of this evil. He wants a purified Church, a loyal Church, a Church that gives 100%. He wants a Church after the church of the martyrs of Rome, Japan, Africa, the Middle East... the Jesuit Martyrs of North America. God wants "everyday", not "Sunday" Catholics.

St. Faustina, in her Diary, noted a dream that has particular significance for us. In one dream, she beheld Our Lord's scourging. Slowly, imperceptibly, she noticed that the Roman soldiers were being one by one, replaced by bishops and cardinals who continued flogging Jesus.

Yes, the Church today is being tortured brutally by Judas priests and bishops.

Let us remain faithful and calm. Let us not betray the Church by leaving for some other synagogue of Satan. There is only one Church. Let us support faithful priests and bishops. Let us pray for them every day. God will send more Don Boscos when He sees we are praying and deserve them.

God Bless You!
St. John Bosco pray for us!