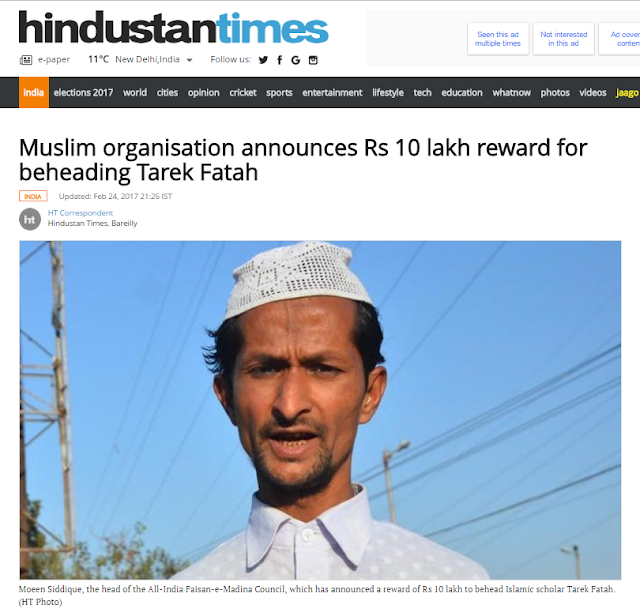 Islamic terrorists in India have offered a financial reward for the beheading of Canadian freedom fighter, Tarek Fatah. Mr. Fatah has written to Canadian Prime Minister, Justin Trudeau publicly via his Twitter account. It remains to be seen if the Prime Minister will stand up and defend Mr. Fatah.

From the Hindustan Times:

A Bareilly-based Muslim organisation has announced a “reward” of Rs 10 lakh to behead Islamic scholar Tarek Fatah for allegedly promoting “un-Islamic” views through his TV programme.

“Tarek Fatah is conspiring to disrupt harmony between Hindus and Muslims. He is as an agent of our enemies. He must be stopped at any cost and our organisation will pay Rs 10,00,786 to any person who will decapitate him,” said Moeen Siddique, head of the council.

“He and his programme are being funded by foreign enemies of our country and the government must initiate an inquiry against him,” Siddique said.


As of this writing, Mr. Fatah has received no response from Justin Trudeau. Apparently Mr. Trudeau is against "bullying". Let us see if Mr. Trudeau's opposition to bullying will include the murderous Islamist bullying of my fellow Canadian, Tarek Fatah, and not be limited to the fantasy of "bullying" against the powerful, wealthy and fascist homosexual lobby?

Alas, for Mr. Fatah, who is also a resident of Toronto, he will not be receiving any help from Wynne. For you see, dear reader, Wynne - see photo below - is an adherent of Sharia Law.

What do homosexuals and Islamists have in common? They hate Our Lord Jesus Christ and His Church.

May God protect and help Mr. Fatah and his family.

What more proof would we need of the cognitive confusion, the diabolical madness, we can find in people who adhere to liberal politics. To see a woman, clearly already confused in life, embrace a completely misogynistic ideology, it defies all comprehension.
What on earth has happened to Canadians? What has happened that they have rejected what is good and sound and true for this insanity?

Yup: "Homosexuals are so "bullied" in Canada that they have a near stranglehold on the media, the academia etc."