Pope Francis: Evil financial systems are based on "a rejection of God" 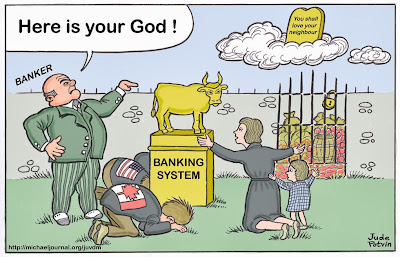 It may well be worthy to remind ourselves of the Supreme Pontiff's words to New Non-Resident Ambassadors on May 16th, following the publication of Evangelii Gaudium.

Worse yet, human beings themselves are nowadays considered as consumer goods which can be used and thrown away. We have started a throw-away culture. This tendency is seen on the level of individuals and whole societies; and it is being promoted! In circumstances like these, solidarity, which is the treasure of the poor, is often considered counterproductive, opposed to the logic of finance and the economy. While the income of a minority is increasing exponentially, that of the majority is crumbling. This imbalance results from ideologies which uphold the absolute autonomy of markets and financial speculation, and thus deny the right of control to States, which are themselves charged with providing for the common good. A new, invisible and at times virtual, tyranny is established, one which unilaterally and irremediably imposes its own laws and rules. Moreover, indebtedness and credit distance countries from their real economy and citizens from their real buying power. Added to this, as if it were needed, is widespread corruption and selfish fiscal evasion which have taken on worldwide dimensions. The will to power and of possession has become limitless.

Concealed behind this attitude is a rejection of ethics, a rejection of God. Ethics, like solidarity, is a nuisance! It is regarded as counterproductive: as something too human, because it relativizes money and power; as a threat, because it rejects manipulation and subjection of people: because ethics leads to God, who is situated outside the categories of the market. God is thought to be unmanageable by these financiers, economists and politicians, God is unmanageable, even dangerous, because he calls man to his full realization and to independence from any kind of slavery. Ethics – naturally, not the ethics of ideology – makes it possible, in my view, to create a balanced social order that is more humane. In this sense, I encourage the financial experts and the political leaders of your countries to consider the words of Saint John Chrysostom: "Not to share one’s goods with the poor is to rob them and to deprive them of life. It is not our goods that we possess, but theirs" (Homily on Lazarus, 1:6 – PG 48, 992D).

More on this gravely important subject to follow over the next few days. Rebellion against Catholic social teaching - be it on abortion, the State, economics etc. amounts to the rejection of the Gospels; it is blasphemy and apostasy.
Posted by Barona at 12:12

I think we are beset by the evils of socialism and capitalism at the same time. How many times confronted with suffering and material need, do we think, "The government will take care of it. They just need welfare/health care/food stamps. That's not my problem I pay my taxes." I think socialism robs us of the desire to help our fellow man. And even suppose that the person IS helped by the government? There is no loving presence with the person helping them, wiping their brow, bringing their child something to play with, there is utterly no connection with another human being. The government provides aid very impersonally. I lived next to and visited people living in Section 8 (government run) housing next to my own neighborhood. Their kids actually had better toys and material goods than my own. But the government didn't visit with them and listen to their problems. The government wasn't there when their husband left them to raise the kids alone. The government didn't visit the sick, counsel the doubtful, comfort the afflicted, instruct the ignorant, admonish the sinner, bear wrongs patiently, forgive offenses, pray for the living and the dead. Nobody else did either because they thought, "Let the government take care of it."

Even the U.S. Conference of Catholic Bishops could think of nothing better for health care than "Let the Government take care of it." They lobbied since 1919 for socialized medicine. And now we have it. Nobody wants it. And it's a tremendous burden on our economy. But my goodness they got the government to take care of their uneasy conscience. Why didn't they just organize their own health care for illegal aliens and the poor. Now we need Catholic Care because many are losing their health insurance, and in good conscience no Catholic could sign up for Obama "Care," which I regard as the Mark of the Beast. God bless you. Susan Fox www.christsfaithfulwitness.com