Cardinal Collins sheepishly pleads with Toronto Catholics: "...IF YOU WISH join in expressing your concerns" about government restrictions on public worship 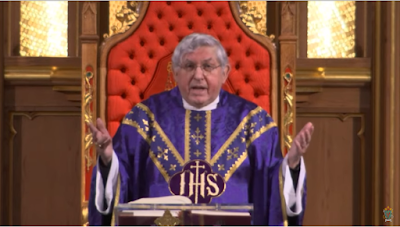 This morning at the conclusion of Mass in the empty St. Michael's Cathedral (cap.1,500), Cardinal Collins FINALLY breached the issue that has been concerning us profoundly since LAST MARCH (and NOT since November, as the Cardinal noted). 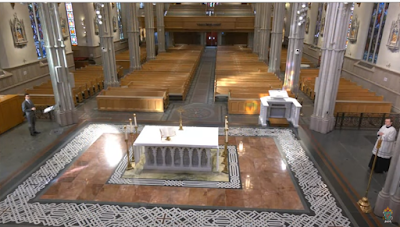 Well, it took ONE YEAR for Cardinal Collins to finally publicly raise the reality that the Government of Ontario, along with various municipal governments, and the attendant "public health authorities" are conducting a campaign against religious freedom and civil liberties. Let me repeat that again: it took ONE FULL YEAR. 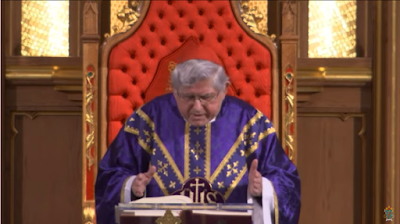 But it was all done rather sheepishly, timidly, and qualified: "So anyway I would er, I would ask you to check our website IF YOU WISH; join in expressing your concerns".

No sense of urgency here. No bold declaration here. And NO, Cardinal Collins the "public health authorities" are not "trying to diligently serve us...". Tell that to those who have lost their jobs, businesses, become gravely ill. Tell that to those souls who have committed suicide. No, these pro-abortion, pro-sexting, pro-masturbation officials are hardly "serving us". They have created massive, massive damage to our country and society. You should be condemning their hypocrisy in claiming to be saving lives yet all the while pushing abortion. SHAME ON YOU!

A proclamation was needed, without pandering to individuals who threatened to suppress all the Sacraments if you did not obey their evil demands. But you capitulated and handed over control of our Sacred rites.

Today you should have done two things:

1. APOLOGIZED FOR YOUR INACTION OVER THE LAST YEAR

2. STOOD UP TO FORD WITH AN ULTIMATUM:

"Premier Ford if the restrictions are NOT lifted immediately, the churches will be opened tomorrow for Mass. I am here at the Cathedral, you know where to find me if you wish to come with your police and arrest me".

Cardinal Collins: Do you really think that oafish Premier would come and arrest you, a 75 year old man? At worst he would capitulate and you would be mocked and excoriated by the downtown elitist and atheist media as a wicked old man who is spreading a virus and killing people. Perhaps word would get back to Rome and they would retire you early. Not a bad deal, "eh"? After all, unlike St. John Fisher you would be only facing mockery and retirement, and not beheading.

Call me  a cynic Your Eminence, but I am wondering what the real motivation behind all this is. I suspect that the same lawyers, moneybags, and "advisors" have told you the bad news about the loss in - you guessed it - money. They want the churches open for Easter, so they can start digging deeply into the abused faithfuls' pockets. But I have news for you: the faithful are aware that you are ONE YEAR TOO LATE.

The cause of his depression, assuming you are correct, is idiopathic. On the other hand, his actions and inaction have caused all too many to be depressed. Open our churches!