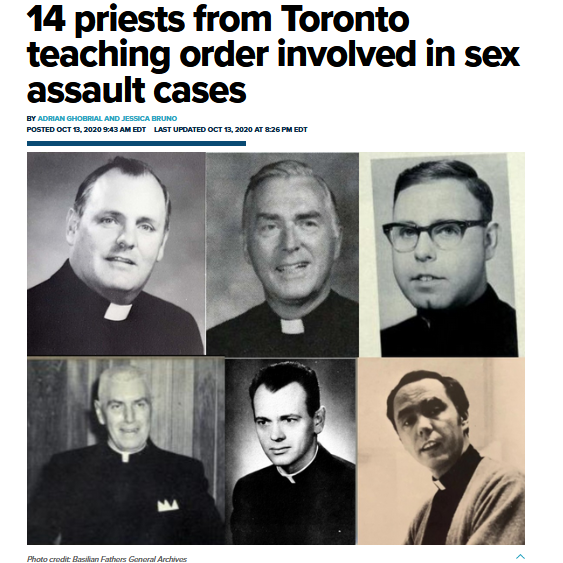 The Basilians are in total moral collapse. From a Catholic Order in the 19th Century, they have morphed into a satanic cult of sexual perverts and enemies of Christ and His Church. Indeed, they are enemies of humanity. They are the slaves of the devil who prey on innocent children to abuse and torture them!

Following the "Sodomy with a Broom Handle" outrage in a locker room at St. Michael's College School, revelations that a Board Member of the same school organized a massive same-sex "marriage" day at Casa Loma, the outrages at St. Michael's College (University of Toronto), and the plagiarism and loathsome attacks of Fr. Thomas Rosica on Vox and Fox Cantoris (which incidentally resulted in a powerful one-two knockout of Rosica by the Vox, as the Catholic blogger not only defeated the vile priest over the threatened lawsuit, but also was the first to expose him as a plagiarist back in 2015) - one could not imagine the Basilians sinking any further into evil.

But the pus-filled carbuncle of evil has burst and we now can report that 14 Basilians (and counting as the investigation is ongoing) have been outed as belonging to an Order reeking with sexual perverts who prey on innocent children! Of the 14 priests so far named, 13 involved homosexuality. For the full list of these wicked creatures please see here.

We are also encouraging any one with information related to this investigation to go IMMEDIATELY to the Police. DO NOT, for any reason go to the Church authorities.

Catholics need to investigate the roots of the "Basilian problem". The order was founded in France during the revolutionary era. To what degree was the order infiltrated by freemasons? While resident on the University of Toronto campus, I witnessed a very heavy presence of freemasonry entwined with a Nazi/fascist diaspora. That nexus had its tentacle in St. Michael's College. Homosexuality and other sexual deviancies were quite at home among this crowd, as was eugenics. They were at the core of the Women's Studies programme at New College and provided key support to the normalization of abortion in Canada. In view of this, the removal of a few "bad apples" is far from sufficient to resolve the problem. It is no less than a P2 Lodge operating in Toronto.

The Basilians fully deserve this pox on their house. They will continue to deal with these allegations off and on for as long as they continue to exist, which can't be much longer. The "settled out of court" payouts come from the collection baskets. Take note, those of you who continue to attend parishes under their control.

Everything is falling apart. Catacomb Christianity and living and worshiping in the bushes,brambles and briers are back. None of them will be really be punished not in this age anyway. We are on our own. Where can we go to partake of the Eucharist? Where can we go that the children will be safe?