Our Lady of Fatima: 100th Anniversary Traditional Latin Mass for Catholics in the Greater Toronto Area 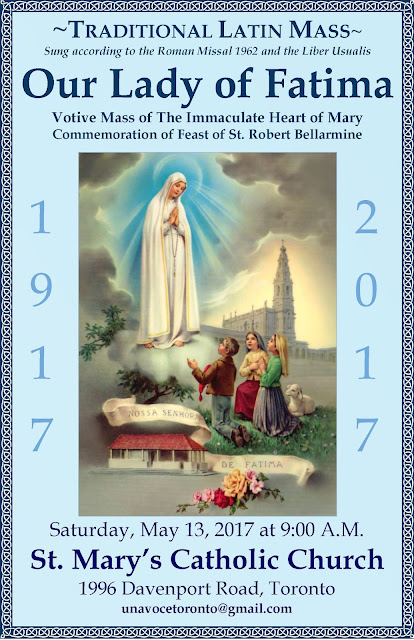 May 13 is the 100th anniversary of the appearance of the Mother of Our Lord Jesus Christ, the Mother of God at Fatima, Portugal. In the traditional calendar, May 13 is the Feast (3rd class) of St. Robert Bellarmine.  In the new calendar for the Novus Ordo Missae, it is the "Optional Memorial" of Our Lady of Fatima. An "Optional Memorial" is just that, the priest can choose the text for Our Lady of Fatima or the Ferial. The traditional calendar was never updated liturgically to recognise the appearance of Our Lady at Fatima.

In the Motu Proprio Summorum Pontificum, Pope Benedict XVI made possible the updating of the traditional Mass calendar of 1961 to include more current feasts and saints. Recently, the Pontifical Council Ecclesia Dei in the Congregation of the Doctrine of the Faith decreed that Our Lady of Fatima could be celebrated on May 13 in the traditional Mass. How appropriate then that the first change should be for Our Lady and in 2017, to recognise the 100th anniversary of her appearance at Fatima.

Other than re-tweeting some news coverage from Fatima, and the isolated event of this or that parish, the Archdiocese of Toronto did nothing to observe this anniversary.

It is typical of an Archdiocese where the hierarchy show no enthusiasm for anything Marian. There must be something they just don't like about Fatima - I don't know -like 'miracles' 'penance' and the supernatural.

To be fair to the Archdiocese, the Ordinations were of pressing concern and promotion this weekend. It is a little saddening not a lot was done for our Lady, other than *a slew* of connecting the Ordinations with the Anniversary. Many of the faithful have a love for Mary and wished the same for the new priests.