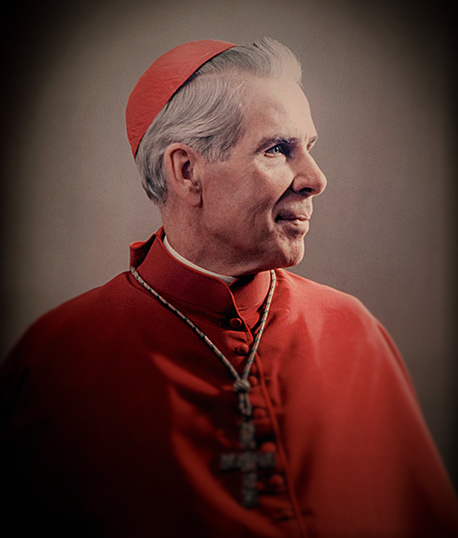 Dear American readers, your country - like Canada - is in total moral collapse. Far seeing prophets such as your Archbishop Fulton Sheen foresaw this decades ago. It was inevitable. America, founded on "religious liberty" and not Truth, was doomed to fail. Canada, especially once Catholic Quebec, fell from an even greater height, as She was once Catholic. Hence, the fall was greater, and of greater evil.

Nonetheless, it was the duty of Catholics in America to turn the United States of America into the Catholic States of America. It was the particular duty of the Hierarchy. Hundreds of Catholics in the United States were martyred for the Faith during the 19th century. The American bishops distinguished themselves in remaining silent about these saints.

The slaughter of millions of babies, the glorification of the breakup of family life, the promotion of sexual depravity and perversion has not gone unnoticed by Almighty God.

He will not be mocked and is now pouring out His wrath. Now, America, like any other Nation that has freely accepted to be the Spawn of Satan will be punished and enslaved by a just God.

Dear American readers, consider the recent "Pastoral Letter " by Bishop (?) McGrath of San Jose. You will notice, dear American friends, not a single word by this "bishop" McGrath about partial birth abortion where a baby is literally slaughtered as it is being born. You will notice that the Holy Name of Jesus is passed over in silence. This letter could have been written by a Freemason. 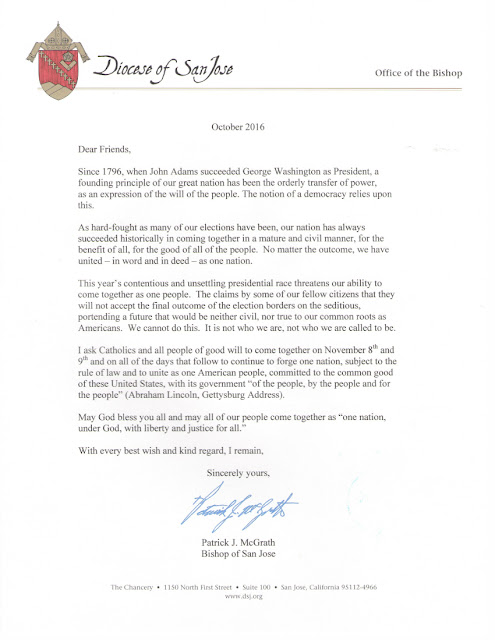 Then, compare it to the dire warning and prophecy by the long-suffering and viciously persecuted Archbishop Fulton Sheen. Consider these words were spoken decades ago. What would the holy Prelate say today about wide spread pornography, homosexuality, murder, family breakdown, contraception, fornication, general indecency, obscenity and decadence? What would he say about the SILENCE of the American Hierarchy when facing an election between one candidate that supports killing babies as they are being born and one who opposes it?


Venerable Fulton Sheen, pray for us
Posted by Barona at 22:03

Truly prophetic words by a true Bishop who knew only persecution from within the Church because he spoke uncomfortable truths.
Compare this great speech with the words of Dolan after the traitorous Al Smith dinner when he said that the dinner portrays America and the Church at its best, surely these modern Bishops are either on drugs or blind, deaf and dumb. They NO LONGER speak to me and neither do most of the non traditional religious orders and for the most part the N.O. Masses I attend.
I am despondent and discouraged and rely only on Our dear dear Lord, His Mother, St Joseph and the saints. I will never abandon the faith for which I pay a personal price in my family but I know I am in very good company when I hear the words of a true Shepherd of Souls like Archbishop Sheen.
God have mercy on us!

I sit in my NO Sunday Mass and just stare at the corpus and ask the Lord to let me hide in His most sacred wounds. The man next to me in "homer simpson" tee shirt with his cell phone chiming chiming before Mass.

Same old homily. In fact, I think this is the third time I've heard the same funny story to start out his homily. Seems like we have to have some sort of funny to kick of the mass or homily.

Of course, after the greeting we get a brief instruction from the celebrant that i's the organist birthday so let's wish him a happy birthday. And, before the dismissal another round of applause for the whole choir... Aren't they wonnerful?! In fact, we're told that the provincial who is accompanying the order superior on his canonical visit, to make sure those birthday wishes get mentioned in mass!

And, this in the most traditional NO part of the diocese. The closest Latin Mass is a 40-50 min one way trip and the "church" doesn't have kneelers in the most of the pew.

Sorry for the rant but just sick of all this crud.

Yes, truly, a prophet. Many a time I have considered what he would say about this issue or that, particularly the telling silence of the USCCB and our Bishops, who have forfeited the right to be listened to at all. Thank you for Exhibit A, this damning letter from a supposed "Bishops". The only good to come from this horrible sham of a papacy is that there will be a record for all time of who was on Christ's side and who was not. It will not be a matter of words or op-eds or Bishop's letters to the beleaguered flock, it will be a matter of who was silent. Their silence in the face of even just this election, is a complete and utter outrage against Christ and the flock they were supposed to guard. They are worldly men, concerned only with themselves and their popularity and comfort. We have lost all respect for such men and refuse to follow them.