Truly the Roman Authorities have gone mad. When a sinner dies, one prays in the hope that the sinner repented before death. I write this post not mocking David Bowie, for whom Our Lord Jesus Christ died. However, the evidence very strongly suggests that this sad, pathetic man led an incredibly sinful lifestyle denying the Faith of his fathers before him. Our Lord Himself said, "many are called, few are chosen". Let us leave the mystery of Bowie's final minutes on earth to make peace with God, with Our Lord Jesus Christ. As for this blog, we commend David Bowie and all those who died yesterday to His Mercy. 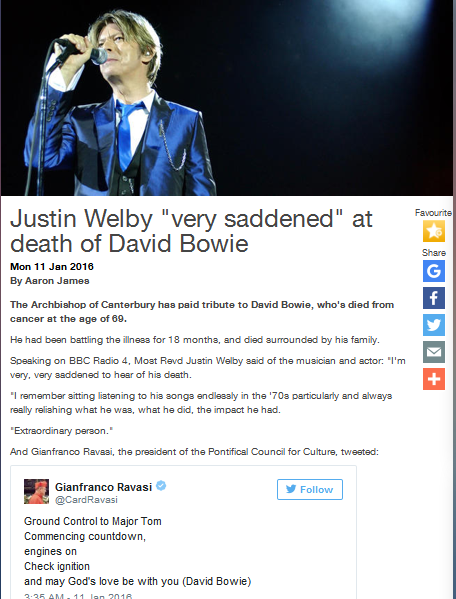 But commending a sinner to God's Mercy does not mean we remain indifferent or silent on the evil that the sinner has committed. This post is about the very serious damage that Vatican Cardinal Ravasi has committed by tweeting approvingly about Bowie, by referencing one of his songs. What kind of impression does this Tweet give to the gullible, already convinced of universal salvation?

David Bowie damaged culture (and culture ultimately is formed and informed by spiritual realities) in a serious manner. His bisexualism, genderism, occultism, his extreme sexualized vulgarity, his public blasphemies, his "inspiration" to a whole plethora of "artists" who dress, behave, act in a manner that is totally contrary to Sacred Scripture is legion. David Bowie was one of those figures who emerged from Swinging London; a subculture immersed in the occult, in homosexuality, drugs, in deviant sexuality. Yet, for the Arch-layman of Canterbury, Justin Welby, Bowie was "relishing... what he was, what he did, the impact he had".

Bowie is to be prayed for, not praised.

Whatever his intentions they are very foolish. The evidence is in the media reaction.

When Someone says judge not lest ye be judged, it is good advice to take. When that Someone is the Lord it puts a fine point on it. I know that command is not meant to dismiss bad behavior, it is hard enough to resist the folly and temptations of the world. I do not think that the Cardinal was trying to absolve David Bowie in 140 characters or less. He did choose a lyric that mentions God's love though. In a sermon at Christmas it was mentioned in our church that Jesus could have chosen any family to be born into. As far as I know David Bowie did not murder the husband of a woman he committed adultery with, yet Jesus chose to be born of The House of David. If you wanted to distill our religion into a tweet you could use: "So in everything, do to others what you would have them do to you, for this sums up the Law and the Prophets." It is a message as Catholics we must strive to accomplish daily.

This phenomenon of church leaders praising those who promote a deviant lifestyle raises serious questions about the presuppositions behind what our church leaders really believe. It makes me want to call on my dear father for advice but I fear he too would approve of androgenous pop stars.

I have changed my perspective. I used to think that singers like Bowie and all the other degraded pop culture icons and instruments damaged culture and the Church trying to survive in the sewer; that '60s perversion led to perverted Church teaching.

Now I think it's the other way around. Degraded singers like Bowie and the sick pop culture he informed is a PRODUCT, not the cause, of a dseased Church led by Fathers like Cdl Ravasi who do not proclaim Jesus Christ crucified and risen again passionately and methodically and unceasingly. Who instead take spiritual meaning from Bowie songs and present not Christ but Bhudda sayings and other cultural dreck as answers to the meaning of life.

It is a serious, serious problem. The Laity will need to assert themselves to stop the Fathers from leading us and the world to perdition. Don't really know how, yet, but the Hierarchy is not going to get this done it seems.