Mary Wagner on euthanasia in Canada: "The Proposal" is "defeatism" it needs to be rejected by the Canadian Federation of Catholic Physicians

"The Proposal"? Will history judge it to be another "enabling act"?

Several weeks ago I published an article that had its genesis in discussions I had with Mary Wagner over euthanasia just prior to her arrest. In what is now euphemistically called "doctor assisted death" I outlined a number of grave concerns we both had. I strongly believe that material cooperation is evident in the evasive "The Proposal". One wonders why there is such weak resistance to the "death train" as it roars into Canada without opposition.

The College of Physicians and Surgeons (CPSO) website carries this on euthanasia:

It is hard to believe that the CMA or the OMA will crush physicians who actively oppose euthanasia; innumerable physicians are constantly up before their organizations for malpractice or sexual misconduct etc.

Many of these physicians manage to drag our potential disciplinary action for years, much of it only resulting in a slap on the wrist. For example, pervert psychiatrist and sexual predator, Joel Dobrowolski preyed on extremely vulnerable women for over ten years without conclusive action being taken by the CPSO.

I encourage readers to explore the CPSO website for a never ending stream of malpractice and sexual misconduct. Readers will notice that "discipline" many times does not involve dismissal for even an incompetent physician. Perplexing indeed is the lack of courage to stand up to an organization that does not seem to move with rigor against real malpractice.

It may well be that the CMA will take resistance to euthanasia much more seriously than medical malpractice or even sexual abuse. Totalitarianism is growing in this country, with opposition to the dictatorship of moral relativism not permitted. However, physicians must be prepared to do the right thing no matter what the consequences are.

Catholics must resist. Compromise is not an option. We have the tragedy of the Catholic Centre Party and Mgr. Ludwig Kass as examples not to follow. Evil never backs off when sensing weakness. 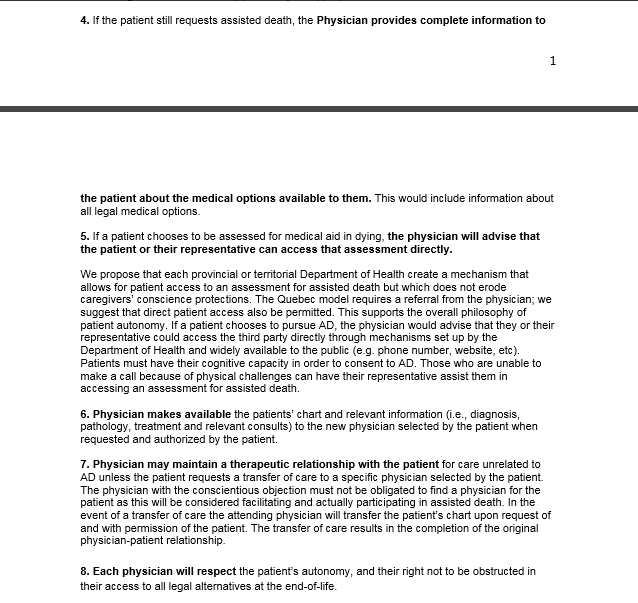 Mary's assessment of "The Proposal" is as follows:

Having read “The Proposal” to the C.M.A. (offered by the Christian Medical and Dental Society and with the support of the Canadian Federation of Catholic Physicians and [the] Canadian Physicians for Life), I fear that these associations, despite their earnest desire to resist doctor-abetted suicide, have succumbed to defeatism.  “The Proposal” expresses a willingness to engage in what I understand to be formal co-operation with a patient’s request for abetted suicide:

“The Proposal” states that “physicians have a duty to provide complete information on all options and advise on how to access a separate, central information, counselling, and referral service”.  Further, the assertion is made that one’s autonomy includes the right to take one’s life: (“The Proposal”) “respects the autonomy of the patient to access all legal services while at the same time protecting physicians’ conscience rights”. (Let us recall the normal human response to someone on the verge of jumping off a bridge and compare the difference).

In addition, the language employed feeds into the push to accept doctor-abetted suicide.  Language matters.  Not only in “The Proposal”, but also in Christian/Catholic media, doctor-abetted suicide has been replaced with such terms as “physician-assisted death”, “assisted death”, and “medical aid in dying”.  Such language obscures the truth and will contribute to the acceptance of this evil.  As Mother Teresa said, “words that do not bear the Light of Christ only increase the darkness”.
Posted by Barona at 18:48

Email ThisBlogThis!Share to TwitterShare to FacebookShare to Pinterest
Labels: Euthanasia in Canada

God's views on euthanasia, and the sinful views of men.
Recently a number of people have contacted me and asked my Pastoral advice on euthanasia. They have been disillusioned with secular commissions, associations, and even non-Biblical church bodies. They’re confused, disappointed, and rightly so. The ultimate and only authority on issues of life come from God, and His inerrant Word, the Bible. In Luther’s Small Catechism with Explanation we find God’s answer to this question in which we can find instruction, comfort, and hope: “The severely handicapped, infirm, helpless, and aged are persons in the sight of God with life given by Him and to be ended only by Him.” What are Bible scriptures we can look to? Proverbs 6: 16-17: “There are six things the Lord hates, seven that are detestable to Him: haughty eyes, a lying tongue, hands that shed innocent blood.” We can also look to Proverbs 31: 8, “Speak up for those who cannot speak for themselves, for the rights of all who are destitute.” Another Bible verse for guidance is Acts 17:25, “He Himself gives all men life and breath and everything.” We need look no further than the first verse of Genesis in the Bible to see this is true. For all those who mourn the effects of a sinful world, and of churches who have fallen away from God, I offer God’s Word and a church that has been true to it. Pastor Tom Steers, Christ the Saviour Lutheran Church, Toronto. Tel. 647-762-8067.

I have thought for a while that a well-formed conscience is treated as a malignant growth these days, to be cut away from our intelligent bodies and discarded with the remains of aborted babies and unwanted adults. God bless you for continuing to speak the truth.