Today's edition of Nasz Dziennik, carries a reflection by Jacek Kotula, the President of the Rzeszow branch of Fundacja-PRO "Zawsze dla Zycia", on Mary's mission for the unborn. Mr Kotula writes:

Mary wrote to me a letter from prison which was dated January 7, saying: "I have said everything that I had to say in the text of the appeal, and my silence reminds us of the silence of  children in the wombs of their mothers: they have no voice, and because they do not have any voice, they are entirely dependent on the decisions of others." 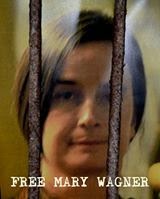 Mary Wagner is in silent solidarity with conceived children to be slaughtered by abortion. Aborted children feel pain, but they have no manner of expressing it. They are deprived of even this minimal form of defense that the tiny child has with a whimper and cry. No one hears their cry and scream when they are killed in the womb. The conspiracy against life in this country continues.

Mary Wagner, through her paradoxical silent protest, shouts: Canadians, come to your senses! One hundred thousand innocent children, created in the image and likeness of God   are destroyed every year in Canada.

The silence that Mary is showing is that she will not accept the demands of people who would like her approval of an inhumane State law. Mary's silence speaks not only to Canadians, but to all, that: "A nation that kills its own children is a nation without a future."

(Translation: Barona)
Posted by Barona at 11:19