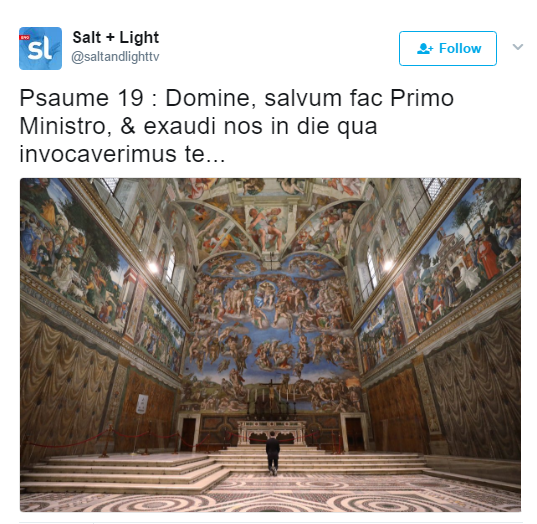 Did you know that Canada now has a Catholic Monarch? Salt and Light TV has just tweeted out a traditional prayer that was recited daily at Mass for the French Monarchs. But there is a big twist: the prayer has been altered to refer to Canadian Prime Minister, Justin Trudeau.

With the destruction of the Catholic Church and Monarchy in 1789, France headed quickly into a Masonic, secular, anti-clerical State, where the Church of Christ would be placed "ignominiously" (as Pius VII wrote) with false sects and even non-Christian religions. France was eventually "re-crowned" with abortion (so-called) rights and homosexuality, to worship her new god of secular humanism. The Prayer for the Monarch being replaced with the blasphemous cry of "liberty, equality, and fraternity".

This beautiful prayer, once offered for men who strived - sometimes haltingly and failingly - to be Catholic, is now tweeted out for a man who fanatically supports the greatest of evils: abortion.

For all their personal sins, no French Monarch ever, ever advocated, supported the mass murder of babies. As Justin Trudeau himself said regarding abortion: "the party that we are building is, and that we are continuing to build as we form government, will be resolutely pro-choice".

When asked by a reporter when did the Liberal Party become so PRO ABORTION, Trudeau replied: "perhaps when they chose a resolutely pro-choice leader, ah, with over 80% support of militants, of ah, of ah, memberships".

I encourage readers to watch the entirety of the following video: it will show you the truly dark, demonic, fascistic, pro-abortion bent of Trudeau. Behind the buffoonery, the narcissistic selfies, the effeminate voice, there lurks the heart and soul of a totalitarian.

Certainly Justin Trudeau desperately needs prayers. He is in grave danger of going to Hell for his positive, proactive support for killing babies.

But he needs serious prayer, not boot-licking, sniveling, groupie-like, toadying from what seems to be sycophants. Disgraceful and nauseating.
Rather than charitably, but firmly challenge Justin Trudeau's abortion policies (and others, such as his aggressive promotion of gender-ideology and homosexuality), Salt and Light TV has opted for silence on this (and other issues), and decided to grovel adoringly before this objectively evil, young man. Salt and Light TV is a glaring example of what is wrong with the Catholic Church in Canada.
For a truly Catholic assessment of pro-abortion "Catholic" politicians, and "Catholics" who vote for pro-abortion politicians, please watch the entire following video by Fr. John O'Connor.


The Text of the Prayer for the French Monarch:

Exaudiat te Dominus. A prayer for the king.

Unto the end. A psalm for David. May the Lord hear thee in the day of tribulation: may the name of the God of Jacob protect thee. May he send thee help from the sanctuary: and defend thee out of Sion.  May he be mindful of all thy sacrifices: and may thy whole burnt offering be made fat.  May he give thee according to thy own heart; and confirm all thy counsels.

We will rejoice in thy salvation; and in the name of our God we shall be exalted. The Lord fulfill all thy petitions: now have I known that the Lord hath saved his anointed. He will hear him from his holy heaven: the salvation of his right hand is in powers. Some trust in chariots, and some in horses: but we will call upon the name of the Lord our God. They are bound, and have fallen; but we are risen, and are set upright. O Lord, save the king: and hear us in the day that we shall call upon thee. (Domine, salvum fac regem, et exaudi nos in die qua invocaverimus te).

On the one hand, I can't believe Pepper and Darkness tweeted that. On the other hand, I absolutely can. And Catholic school principals let them into the elementary and high schools around the Archdiocese of Toronto.