Ariana Grande: corrupter of children and destroyer of the soul

Until last evening I had never heard of Ariana Grande.

A few minutes on the internet this morning identified her as a promoter of sexual libertinism, pornography, obscenity, profanity, feminism, and the LGBTQ agenda. Yet for all of this, it seems that parents have no qualms about sending their pre-teen and teen girls to listen and watch this loathsome individual.

What kind of parent permits their child to listen to this woman's so-called "songs"? To attend her "concerts"? Objectively, a very evil parent.

A brief extra minute searching the internet identified a Scott Samuel "Scooter" Braun as her manager. This vile man is nothing but a huckster and promoter of pornographic filth. A review of the types of show Grande stages, are what might be called "slutfests" and the promotion of homosexuality. The promotion of sexual libertinism and perversion is not the type of concert a good parent takes their child to. 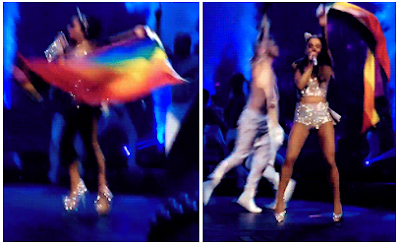 A further review of a few Grande "songs" show them replete with graphic, street slang referring to sexual acts, as well as the usual four letter words. Apparently, such evil did not concern the parents who permit mere children to listen and attend Grande shows. What kind of parent allows a young child to be exposed to the pornographic filth, profanity-laced, sexual debauchery of  "Side to Side", or "Bad Decisions"?


I cannot but be puzzled how parents who seemingly are so distressed about the killing of their children, but remained utterly unconcerned that their children were slowly being spiritually poisoned. Tragic as the murder of the human person is, a far greater tragedy is their eternal destiny. To murder the body as evil as it is, is not as evil as murdering the soul. It cannot be denied. Had parents showed vigilance and spiritual concern for their daughters, these children would be alive today. Sin breeds sin.

It is interesting that the Islamist mass murderer, the apostate Catholic Grande, and her Talmudic Jewish Manager have one thing in common: a hatred of Jesus Christ.
Posted by Barona at 21:03

How do we know her manager studies Talmud?
I doubt it. He wouldn't be involved with this of he did.
Ever other point in this essay was right on.

Braun is a conservative Jew; hence, an adherent to Rabbinical or Talmudic Judaism.

You must be listening to a different version of her songs than I have heard cuz I don't remember any four-letter words. Plenty of innuendo though

The sexually graphic content, replete with four letter words can easily be found if you read the songs.

It seems to go unnoticed by many Christians that a significant number of those terrorists attack religion-mocking cartoonists (I am not Charlie, for the record), sodomy bars (Orlando), satanist music band's and immorality promoting starlet's concerts. My pointing it out does not mean that I support terrorism. I would simply like to see more articles like yours.

True. But they also attack Christians during Mass and as in Egypt, yesterday, on buses to a monastic pilgrimage in Egypt.

Anonymous 7:35. Indeed they do! Notice the veritable SILENCE by the media? Notice the playing up of a knifing in the United States? It is part of a racism of lower expectations as well as a joy by those traditional enemies of Jesus CHrist who control the media.

Notice how the world laments the 22 deaths in Manchester: yes, some abused and violated innocent children died. Yet, not all were children: some knew and understood what Grande represents: they died, unless repenting, in their sins.

To the contrary, the Christians were on pilgrimage.

Muslims love Jesus Christ as a Noble prophet and messenger of Real One and only God. That evil terrorist was probably brain washed and did not know much about Islam.

Dear Anonymous 18:00. Our Lord Jesus Christ claimed to be God. Either He was or He was not God. This is the very central question: just who is Jesus Christ? If He was not God then He was a mad man, deluded. If He is God then all other religions are false.

You know nothing of Islam.

In the first 100 years after the death of Mahomet, nearly every Christian from Assyria through Lebanon and into Palestine, Egypt, Libya and Morocco was forced to convert, pay the jizya or be beheaded.

Barona, Islam teaches that Jesus never claimed to be God, that is why they can say they love and respect him. What Muslims don't know is all the omitting of the gospels (the injil as Muslims call it) Islam has done. If they actually read the gospels from beginning to end they would see that Jesus is God. Islam takes verses out of context to prove their claim. Jesus did claim to be God. Their Wuran also has false gospel books that have never been proven to be authentic with fictitious stories about Jesus. This blinds Muslims to the real truth. We need to pray for all Muslims especially this month of Ramadan.

Your splitting hairs and not taking the context of the article with any merit. Are you one of the parents sending your kids to these concerts? Sad

Demoralization of the clueless Goyim.

You are a representation of why this world is so wrong and corrupt. Love is love, easy as that. Clearly you don't know what love truly is. Instead of calling it "lgbt+ rights" it should be called "HUMAN RIGHTS" aren't we all human?

Anonymous 16:38. You have not answered any of my objections. We are all indeed human, but what we DO is different from what we ARE. Being and acting are two different things. What a man is (a human Being) is different than what he DOES (e.g. commits murder). We are moral agents and actions have consequences.

Finally: you have not defined what love is. If you believe that a man's reproductive organ belongs in another's man's rectum then you clearly do not know what love is.

Okay. This is the most inaccurate and biased review of Ariana Grande EVER. I, being a Catholic and a HUGE fan myself, completely disagree with nearly every single point on this review.

Obviously, Ariana does have some mature content in only a few of her songs. However, most of her songs have no sexual reference whatsoever.

If you disagree, listen to "Honeymoon Avenue," "Thinking Bout You," "Pink Champagne," "Piano," "Put Your Hearts Up," "Moonlight," "My Everything," "Boyfriend Material," "One Last Time," "Leave Me Lonely," "Gave It Away," "You'll Never Know," "I Don't Care," "Be Alright," "Almost Is Never Enough," "Baby I," and the many, many more non-sexual songs by Ariana.

As for the LGBTQ flag and statements made by Ariana, her brother is homosexual. Ariana simply wants to support him.

As for "young children" being exposed to swear words, if not heard from Ariana they will surely hear them somewhere else.

The world is changing, and we need to change with it.

Ariana is a talented young woman. Who's to say she can't embrace that talent and share it with the world?

If you really wanted to write a real, unbiased review, you would have spent at least a little bit more time researching BOTH sides of the argument, instead of just the traditional Catholic's point of view.

Thanks for wasting my time.

First: you chose to waste time (your words).

As to her brother being a homosexual, one supports a homosexual by encouraging to remain chaste, and not sin. One does not prance about the stage half-undressed before impressionable innocent children with the "gay liberation flag". This being said, do you believe in sin?

As to the world changing: truth is based on Christ and His Church, not with the world "changing". After all, the world will continue to change. If the world "changed to Nazi five years from now, based on your logical, you would become a Nazi.

Talent is irrelevant when discussing morality and the teaching o the Church.

I can assure you that I spent more than a few moments.

There is no such thing as two sides to the truth. If you have two sides to an argument, either one is correct, or both are wrong. You cannot have two truths.

You seem to think there are various types of Catholic viewpoints. No, the Catholic Church does not have a "viewpoint", She has Christ's Truth. Period.

I, for my part do not consider it a waste of time pointing out to you your errors.

I encourage you to read the Catechism of the Catholic Church. Calling yourself Catholic is one thing; living according to Christ's teaching is another.

The girl is trash her brother is a SODOMITE and they will both have answer for it one day. I'm a sinner too but I don't flaunt it