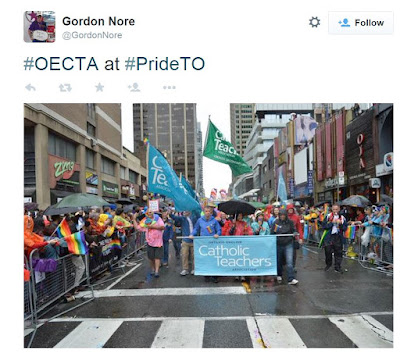 A Saskatchewan Court ruling which would eventually free Catholic education from the tyranny of the State may be   over-ruled by Premier Brad Wall, by his invoking the right of a province to reject a court ruling via what is known as the Constitutional "Notwithstanding Clause".

The Judge's decision would de facto inevitably free Catholic parents to actually decide if they wished their children to receive a real Catholic education.

The Judge was correct in stating that Catholics have a constitutional right to a Catholic education. This right,however,  does not flow from the State but from God. The State only reaffirms it. God writes straight with crooked lines and here the Judge struck the bulls-eye: Catholics are entitled to a CATHOLIC education. Perhaps this Judge is actually well aware that what is being touted as Catholic is actually not Catholic, but a monstrous lie. A deception.

God will even use a pagan Judge to call out the vileness of so-called Catholic education. For those seeking to confirm the degree of the perversity of the "Catholic" educators in Saskatchewan, as well as the cowardice and complicity of the bishops, a brief review of the State funded Saskatchewan Catholic school system discovers that it is -like its Ontario counterpart -  heavily into the LGBT agenda. 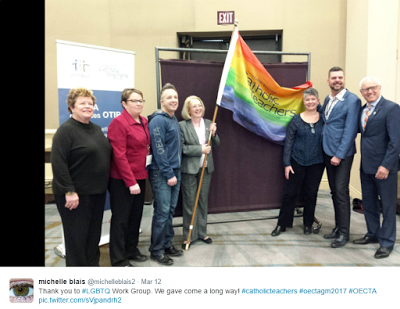 Notwithstanding this (no pun intended) The Catholic Register - the official Archdiocesan newspaper of Toronto - has published an editorial strongly in favour of the Premier's invocation of the Clause. The Catholic Register editorial continues the cover-up and official party-line that State funded Catholic schools teach Catholic Doctrine. No, the State funded schools do NOT teach Catholic doctrine.

The Catholic Register fails to inform us how it is "smart" for the continuance of a school System that is anti-Catholic and robs the tax-payers in the process for something that is false and a lie. The promotion of homosexuality is a grave evil. The Catholic Register fails to tell how how schools can call themselves "Catholic", yet openly promote homosexuality, displaying the "Rainbow" flag of "gay liberation". 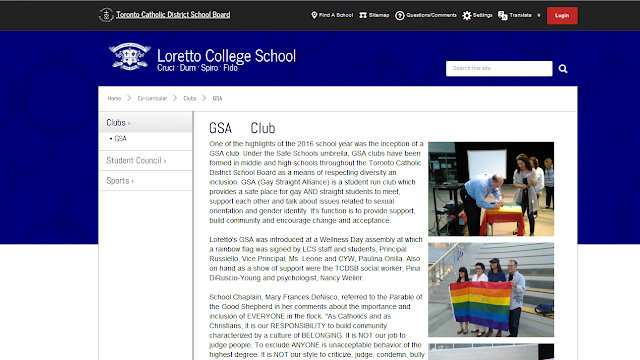 The Toronto Catholic District School Board and the Ontario English Catholic Teacher's Association have a militant pro-homosexual agenda. The agenda includes the open promotion of homosexual propaganda in schools even to the extent - as mentioned above - that the "Rainbow" flag, the symbol of "gay liberation" is displayed in Catholic schools across the Greater Toronto Area and no doubt beyond. This silence of Cardinal Collins, and this delicate balance of Bishop Dolan must be repudiated. The salvation of souls are at stake. The souls of innocent young children.

Let me mention just three men who were not silent, nor sought striking delicate balances with falsehood and evil. Firstly, the God-Man, Our Lord Jesus Christ: rather than back down one iota, he allowed Himself to be Crucified for the Truth. St. Paul, in his turn, warned us in the Book of Romans that those who practice homosexuality will not inherit the Kingdom of Heaven.  St. John Chrysostom, in his writings against unnatural sexual vice, informed us the with the manifestation of sodomy, "hell appears before its time".

There is no such thing as a "messy" truth. There is no such thing as striking a balance between 2+2=4 and 2+2=5.  Just tell that to a civil engineer designing a bridge. A bridge built on 2+2=5 will fall down. So too, with the Cardinal's silence (being actively promoted by the deceptions of The Catholic Register), and Bishop Bolan's delicate balance between good and evil all will come crashing down.

Pray for the children being perverted by deviant and evil teachers, Unions and School Boards. Pray for the conversion of cowardly bishops who would remain silent and strike balances as souls are at stake.
Posted by Barona at 17:31

Email ThisBlogThis!Share to TwitterShare to FacebookShare to Pinterest
Labels: Cardinal Collins, Crisis in the Church, Education