BREAKING NEWS: Fr. Matthew Despard will NOT be suspended! 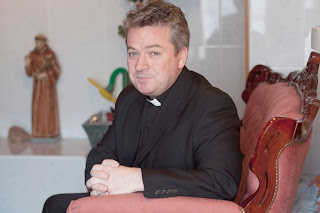 The Herald carries an article that Bishop Joseph Devine has backed off a plan to suspend Fr. Matthew Despard, after the publication of Fr. Despard's book Priesthood in Crisis.

It would seem that the hierarchy has decided that any action against Fr. Despard would blow the top off the homosexual cover-up. They are probably accepting the "damage" of Fr. Despard book as the lesser of two "evils" - in other words, the suspension of Fr. Despard would unravel over 40 years of homosexual activity and conspiracy.
Yet, this is a disgrace. If they are not going to suspend Fr. Despard - they admit he did no wrong. Now, I ask: Bishop Devine, when will you begin to investigate the "gay mafia" and take action against it to protect the purity and sanctity of the priesthood and the church in Scotland. Let us be honest, the diocese is continuing a COVER-UP.

UPDATE: Just off the phone with a relative from Motherwell. I can confirm that there is great distress amongst Catholics. The "gay mafia" scandal is what everyone is talking about.

SCOTLAND'S longest-serving Catholic bishop has backed down from moves to sanction a serving priest over claims the Church has covered up a culture of sexual bullying.
Joseph Devine, Bishop of Motherwell, issued a notice this week stating no action would be taken against Father Matthew Despard, who has alleged sexual misconduct has been rife for decades in junior seminaries where teenagers train for the priesthood.
Father Despard, parish priest of St John Ogilvie's in High Blantyre, South Lanarkshire, has written a book on the allegations. It names serving priests and claims senior figures in the Church refused to confront complaints of abuse and bullying.
Although written in 2010, Father Despard self-published Priesthood In Crisis on Amazon's Kindle store last month in the wake of the resignation of Cardinal Keith O'Brien and his admission of gay relationships and sexual activity spanning decades.
It has generated a storm within the Church, with Bishop Devine instigating moves which could have led to the removal of Father Despard from his parish or led, theoretically, to his removal from the priesthood.
However, amid concerns any action could simply add fuel to the controversial claims of Father Despard and embroil senior figures within the Church, Bishop Devine has abandoned any punitive action.
One senior source said simply: "Devine blinked."
Posted by Montfort at 09:05

Thanks for keeping us updated!

Big bit in the paper this weekend again calling him a liar and to be sacked, quite funy how he has bullied numerous church goers at John ogilvie parish for a few years now and its just starting to get noticed. The article was published in the Scottish Sunday mail this weekend. Hopefully now something will get done about this man