Multi-billionaire, Bernard "Barry" Sherman and his wife, Honey, were found dead in their north-Toronto home yesterday. Upon the announcement of the deaths, politicians and the liberal elite have been falling over each other with praise for Sherman. New reports claim that police are working on the belief that Sherman hanged his wife, before committing suicide. 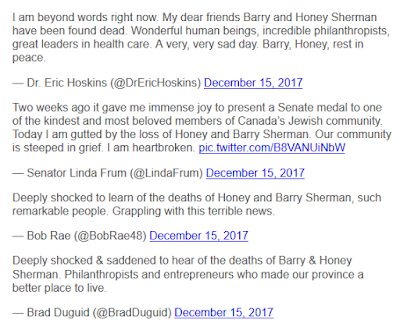 You will notice, dear readers, there have been no words of prayer for this man and his wife. After all, for them, Sherman is a veritable saint. In Canada, perhaps Barry Sherman needed more prayers than anyone.

You see, how many Canadians know that Barry Sherman was a rabid supporter of abortion? Sherman, as a big-pharma, multibillionaire, was an active enabler of the abortion industry. Perhaps this helps explain the lamentations heard from the wealthy, liberal elite? Perhaps the deaths of so many innocents eventually drove Sherman mad with guilt?

The fact is, that when RU-486 was first released, it was Barry Sherman who was the most strident and aggressive promoter of this drug that was designed to kill the conceived child in the womb. Your intrepid Barona discovered a 1996 MA thesis submitted by Patricia A. Campbell (1996) at McGill University documenting (see screenshot above) Sherman's militant abortion advocacy. Campbell  cites the Toronto Star, July 1992 as her source. How much blood did Barry Sherman have on his hands when he died? How many Canadian innocents died as a result of Sherman's "emergency" contraception?

As Catholics, we have a duty before God to pray for sinners. Barry Sherman, objectively speaking, was probably the most evil man in Canada. He facilitated a whole empire of death, and exported it around the world, amassing - in the process - an enormous fortune of blood money estimated at near 5 billion dollars. Catholics should be praying for the conversion of sinners like Sherman.

Yesterday death came for Sherman and his wife. The sad man was killed by unknown professional killers. It is ironic that Sherman was a threat to the Israeli economy. Was he liquidated by the Mossad? Anything is possible. There is no end to the list of possible states or governments that would wish to see him dead. Notice the subject has now dropped out of discussion.

A promoter of death to his last breath, Sherman now has had to account for his actions before God. Did Sherman repent? Did he convert? Or, did he go to his death believing in abortion and rejecting Our Lord Jesus Christ?
Posted by Barona at 13:23

To commit murder just before you go indicates not repentance but a determination to deny God and fling yourself into hell.
"The wages of sin is death."

This is actually the dumbest article I’ve ever in my life.

Barona, thanks for digging this out. Apotex, in order to exist at all, would have to be part of the global pharmaceutical monopoly cartel system. Here's the rest of the picture that Sherman was a part of:
http://spitfirelist.com/for-the-record/ftr-411-the-bayer-facts-ig-farben-and-the-politics-of-murder/

Possibly a hate crime? The anger of the killer was so pronounced that he had to leave his victims hanging. Expect a confession by a devout Catholic for the crime. He will be found innocent by a church going jury.

Looks more and more like the Shermans were eliminated by very powerful, wealthy forces. The Israelis? Not out of the impossible.

Well, some of my contacts were shocked at this connection.

This man did not believe in God and professed his hate of all religions. Although he did donate millions to Jewish organizations. I believe he only did that to appease the rich Jewish bankers who are behind most if not all perversions that effect the general population. Mr Sherman believed life had absolutely no meaning. It's no wonder he had no moral issue with becoming a billionaire off of the deaths of thousands of innocent babies. He felt compelled enough to share this belief in his "memoir".

Under family, accomplices as well as political pressure (“The couple's death was met with heartfelt tributes from the political, business and charitable leaders Mr. Sherman befriended in his long career. “), Lead Police Investigator to death of Bernard and Honey Sherman (Apotex) during called press conference released “conclusion / a hypothesis/ theory” without any actual evidence to the statement and during pending / not concluded reviewing of multi cameras recordings, that “victims died due to targeted murder by strangulation”- "ligature neck compression," or strangulation. Previously officially, police have marked the deaths as "suspicious" and a homicide — but not murder. “Canadian newspapers have reported a police theory that deaths were part of a murder-suicide”. Citing a Toronto police source," The Globe and Mail said investigators were working on an early theory that Barry killed Honey before killing himself”. The pair's children have rejected this theory.
Police Investigator facilitated fraud to allow family to collect victim’s Life Insurance by a family and to perpetuate false perception of “philanthropic / honest / giving nature of desist in Court of Public opinion! Ah…).

Hopefully something bad happens to you soon