BREAKING: Justin Trudeau and the Bishops ~ the greatest scandal in Canada!

I encourage all readers to visit the excellent blog, "Contradiction" for the greatest scandal rocking the Catholic Church in Canada.

"Contradiction", seems to be a voice in the wilderness calling out a man who has the blood of innocents on his hands.

A bit of background on Canada is in order, as this blog has a large very international following.

Justin Trudeau, the Prime Minister of Canada is militantly pro-abortion. So much so, that he and his handlers are handing out hundreds of millions of tax payers money to kill babies of colour in the third world. That means, de facto he is also a racist.

He is also a militant supporter of homosexuality and the entire "LBGTQ..." so-called "gay liberation" movement. That means he is de facto a pervert as he promotes perversion.

Yet Canada's bishops are silent. Oh yes, an occasional whimper here and there, but no action, no real action!

To the contrary, Justin Trudeau can turn up at Notre Dame in Montreal and receive Holy Communion right out of the hands of the Archbishop! Then, he and his wife can kneel is "piety", mocking Our Lord Jesus Christ!

As Prime Minister, Justin Trudeau resides in Ottawa. This means his Ordinary is Archbishop Terrance Prendergast. Sadly, however, Archbishop Prendergast has decided to remain silent. He has decided not to impose canonical sanctions on Trudeau, who continues to masquerade as a Catholic in good standing.

Indeed, Thomas Rosica CSB, the other month even tweeted out photos of Justin Trudeau "praying". Worse, Rosica even tries to draw parallels between Catholic French monarchs and the pro-abortion, pro-sodomy Trudeau. How can Rosica get away with it? 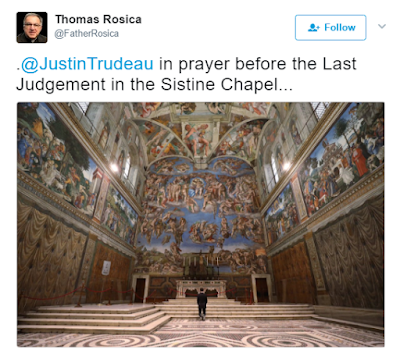 Thomas Rosica gets sick!  An apologist for a demon

Simple: Prendergast refuses to do his duty.

There you have it dear friends: Canada's episcopacy are nothing but a bunch of effeminate, emasculated runts and cowards. Pray for these poor, pathetic, deluded and cowardly men.
Posted by Barona at 17:59

I agree with everything you've said about Justin Trudeau's scandals; BUT I VEHEMENTLY DISAGREE with your assessment about Archbishop Prendergast!

You are obviously uninformed. The Archbishop of Ottawa published a PUBLIC letter on this Catholic Canada web-site, (if I'm not mistaken). There was also an article he wrote, that appeared in the local News paper, wherein Archbishop Prendergast DENOUNCED The Prime Minister's views on abortion and ON LGBTQ+ issues as being DECIDEDLY UN-CATHOLIC!

The Archbishop also, privately met with the P.M. and told him that should NOT present himself for receiving The Eucharist! Even after being given this 'sanction' by his Archbishop, Justin Trudeau brazenly presented himself to participate in Communion at a parish in MONTREAL -- WHERE HE DID RECEIVE COMMUNION -- given to him by a MONTREAL BISHOP -- IN FRONT OF SOME CARDINALS THAT WERE ALSO PRESENT! THESE ARE THE CLERICS THAT SHOULD BE 'OUTED'!!

This was, and IS a 'scandal' ... BUT, Archbishop Prendergast IS NOT the one who is responsible for this public scandal!

The Bishops and Cardinals in that Montreal Parish are the ones who have shirked their duty and caused this Scandal. PLEASE PUT THE BLAME ON THIS WITH THE ACTUAL PERPETRATORS OF THIS SCANDAL!!

AS WELL, PLEASE DO SOME SERIOUS RESEARCH BEFORE BESMIRCHING THE NAME OF A 'GOOD' CATHOLIC ARCHBISHOP, WHO IS LOYAL TO THE MAGESTERIUM; AND ACTUALLY DOING IS JOB WELL!

Dear Suzanne, Have you read Contradiction's blog? He has, on numerous occasions raised very serious questions about Archbishop Prendergast. The Archbishop is Trudeau's bishop, he does have authority over him, he can - but refuses to impose any canonical penalties on him. The implications are vast.

I agree with everything you've said about Justin Trudeau; BUT, I VEHEMENTLY DISAGREE with your comments regarding Archbishop Prendergast! In fact, if you had done a little research prior to your blog, you would have found out that Ottawa's Archbishop DID NOT remain silent.

In fact, our Archbishop had a private meeting with the Prime Minister about his very public views on abortion and his open, public support for LGBTQ+ "marriage" & "rights', wherein Archbishop Prendergast told Justin Trudeau that he should, henceforth NOT PRESENT HIMSELF TO RECEIVE THE EUCHARIST!! In fact, Archbishop Prendergast posted an article on this 'Catholic Canada' web-site about this censure when he discovered

It was not very long after this private meeting that Justin Trudeau was at a televised Mass in a Montreal church --- where, instead of a 'homily', Justin Trudeau spoke to the congregation FROM THE PULPIT --- AND WHERE HE WAS SEEN RECEIVING THE EUCHARIST!

THIS WAS MOST DEFINITELY A SCANDAL --- BUT, THE BLAME FOR THAT DOES NOT LIE AT THE FEET OF ARCHBISHOP PREDERGAST!!

The blame for this scandal squarely belongs with the defiant P.M., himself, AS WELL AS with the BISHOPS, ARCHBISHOPS and CARDINALS that were in present at that Mass in Montreal! SHAME ON THEM all!!

Rosica gets away with it because he's being groomed to be the newest bishop of the Archdiocese of Toronto. Simple.