LINDA GIBBONS: the story of her arrest on September 2, 2015

I beseech you therefore, brethren, by the mercy of God, that you present your bodies a living sacrifice, holy, pleasing to God...
(Romans, 12:1) 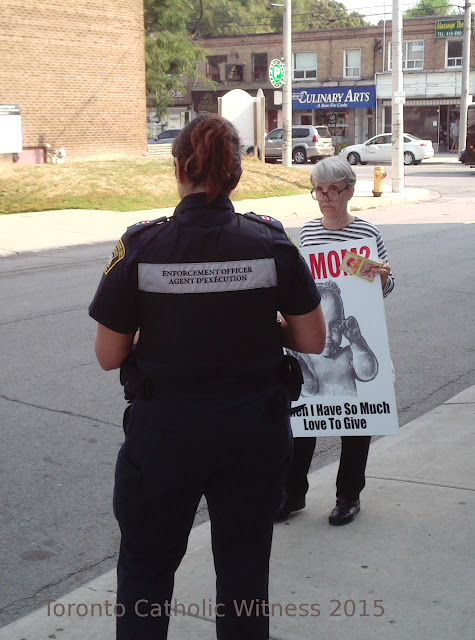 Linda Gibbons, our dear sister in Christ, was arrested yesterday, a few minutes after 11 a.m. outside the Hillsdale Morgentaler abortion facility in the east-end of Toronto. The clinic sits on the edge of a quiet neighbourhood that surrounds busy, vibrant Bayview Avenue, in the north-east part of the city of Toronto. Walking through that area one would not be aware that quietly, furtively - yet with full protection of a corrupt and decadent law - daily murder is taking place. The murder is systematic and automated. The bloody business of abortion naturally operates on "business" hours, and the tragic mothers come accordingly.

On this hot, sunny and mildly humid September morning, Linda began her witness; and as with so many in the past: arrest by the police. Just after 9 .a.m., as I arrived and spoke briefly to Linda, she was already doing what she would do for the next two hours. Linda had taken no food or drink since the evening of the 1st of the month. This entire day she would fast.

And so, quietly, slowly, peacefully and silently she walked back and forth on the sidewalk outside the building, occasionally pausing, holding her sign: "Why mom, when I have so much love to give"? I watched with horror as a woman, obviously with child, walked hand-in-hand with a man towards Linda, and then turned and went into the slaughter house. I realized that I had just witnessed a murder in process. Later, another woman went in.... yet there were no police on hand.

Lianne Laurence from Lifesitenews and Christie Blatchford of the National Post were on site documenting this great drama for life. It was heartening to see a journalist from a major newspaper present; listening, observing, sympathetic to the great injustice (She has written an solid article that may be read here).

The only presence were two security guards standing in front of the pathway leading up to the mill; occasionally a third and even a fourth man appeared, to disappear. Why they were there, was a mystery to me. I saw a mother walk past Linda with a baby in a stroller. Many people strolled harmlessly by. Linda was no threat, and these "guards" knew it. These two sad moral weaklings (pray for them) were there under orders from the bloodied tyrants inside. In essence, the presence of these guards were a visual reminder by the State that you do not even dare to quietly hold a sign against abortion without consequences. 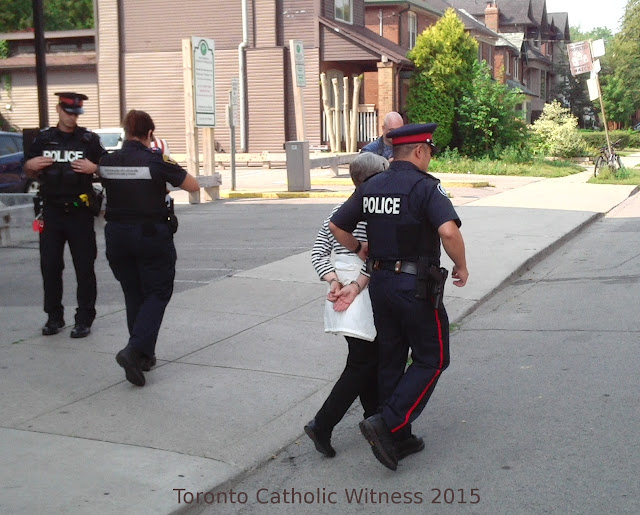 As time passed after 10:30 a.m., we hoped that perhaps the police would have done their homework and not bothered to call the Sheriff's Office of the Ontario Ministry of Law Enforcement.  I was in a pensive mood, when suddenly about twenty minutes later (10:50 a.m.) I looked up to see two police cruisers approaching from the north along Bayview Ave; their station just up at Eglinton. My heart sank, for I knew what was to unfold. I recall with particular attention the first cruiser as it neared Hillsdale; yes, in the slow traffic I could see the car shifting to the side street, turning. I crossed the street from Bayview and approached the scene. I was going to approach the police to try to intervene on Linda's behalf.

Each car contained one policeman; who, after a couple of minutes, exited their vehicles and approached Linda. Not speaking to her, they began to take notes from the guards. Within minutes, two women came out from the clinic. They too began speaking to the police. One woman at times shielded her face in possible shame as the journalists, and attendant photographer for the National Post moved about taking photos. A female employee of the Sheriff's Office had joined the police upon arrival.

Shortly after the police had finished, a Sergeant also arrived to observe - probably sent by his superiors, given that a reporter from a major newspaper was there. I decided to approach him. I informed him of Linda's case, that she has been acquitted and has had charges dropped on the two previous occasions  from her exact same actions at the same location.  He claimed that the police were to "enforce the law". He spoke of the 1999 injunction and stated that it was "up to the next judge" to decide whether or not Linda was to be charged. The police merely were dutifully and meticulously applying whatever law was on the books. He admitted though that there were hundreds of obscure laws that were and have been disregarded as to police action. But this law, according to him was to be enforced. All of this reminded me of the Enabling Act of 1933 as the Nazis gained power with the cowardly collusion of bad Christians. It was frightening to see police mindlessly bound to their State masters; who, in turn, seem to be held in an iron grip by powerful forces dedicated to a culture of death. What happened yesterday confirmed in my mind again that we are a fascist State. Our "democracy" a sham. Concluding my conversation with this sergeant, I began to take photographs. 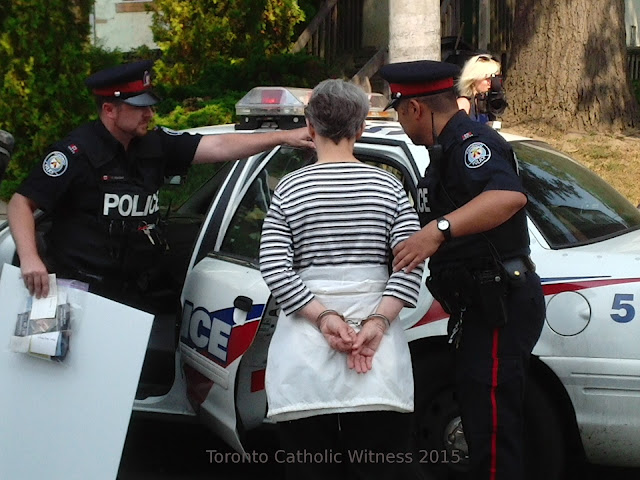 During this time, the "Injunction" was being read to Linda. A document as deplorable as it is evil: a whole list of outrageous conditions were droned off to Linda by this sad woman. Finally she proclaimed to Linda: "...I have read it to you three times do you understand..."? I could even see she had a piece of paper with her final order written out by hand in red marker. It was all so tragically pathetic to see all these "law" enforcement officials there crowding around one slight, gentle woman quietly opposing the killing of babies. Not responding to this question, the police moved in.

Linda's sign and materials were taken from her; she placed her hands freely behind her back, she was handcuffed. Yes, she was so "dangerous", that she needed to be handcuffed. Linda then spoke her only words, decrying the fact that slaughter was taking place and they were doing nothing about it as law enforcement.

Linda was led across the street to the second cruiser; rear door opened she entered the vehicle, her hands uncomfortably handcuffed behind her back. For a few minutes more the police lingered. I looked at my watch, it was about five after 11. Then, slowly the cruisers headed east along Hillsdale, Linda Gibbons the conscience of Canada, handcuffed and under arrest and heading for a day in jail before today's Court appearance. Freyr and I shall be in Court to witness for her. 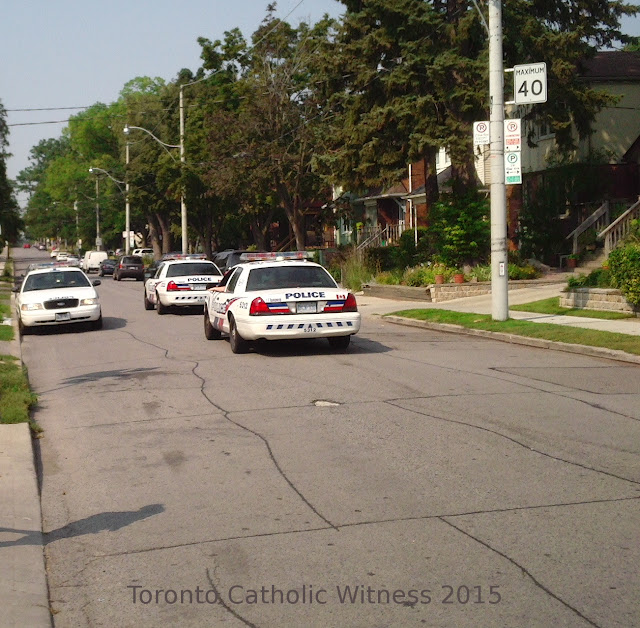 But more than Linda was arrested and handcuffed yesterday. Truth, life, love and liberty were arrested, handcuffed and led away. Many are praying for Linda, including a Convent of wonderful, holy Carmelite nuns. Let us do likewise.

"clinic"
"business"
"law"
"security guards"
"guards"
"enforce the law"
"Christians"
"democracy"
"Injunction"
"dangerous"
Scare quotes convey derision, irony or skepticism. Excessive use of them or their use merely to convey emphasis should be avoided.
(The Witness Manual of Style)

Will the "Thomas More Lawyers Guild" come to her help? If not, why not? Just asking.

Great Post! Barona. Thank you for the details. Totally amazing when just two weeks ago, 570 people milled around an abortion clinic in Denver without the presence of any police, and only one nervous security guard to tell us to stay behind the yellow line. LOL. God bless you. Susan Fox www.christsfaithfulwitness.com

Thanks for the "advice" Freyr.