An openly homosexual individual by the name of Mo Rocca read the First Reading at the Papal Mass in New York City. Rocca is also in favour of "same-sex marriage". This abomination was referred to by the now long forgotten St. Pope John Paul II as "an ideology of evil". The homosexual "Advocate" writes:

Rocca also talked about being outside Stonewall Inn the night New York enacted marriage equality: “I tweeted about it. It was very memorable, very emotional, it was a great place to be.”

One must presume that the details were drawn up by Timothy Cardinal Dolan's underlings. Dolan is now infamous for his disgraceful pro-homosexualist behaviour at the St. Patrick's Day Parade this past March. One wonders why Dolan has changed his mind on homosexuality? Why is Cardinal Dolan an open homosexualist? The possible answers, dear reader, I leave to your capable deliberations.

Yet there are still those who deny that a powerful, influential and deadly homosexualist force has infiltrated the Catholic Church. And there will be those who continue to deny it.... 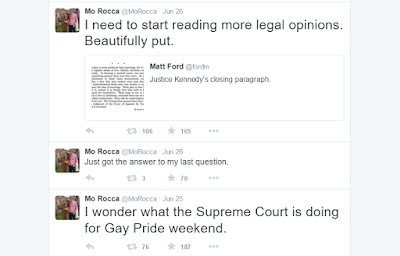 And what was so "beautifully put", that Rocca retweeted? Here it is: 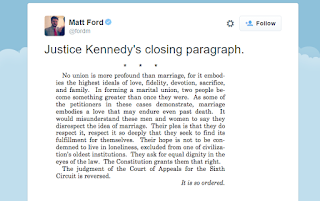 Well, they do have "gifts and qualities to offer to the Christian community" according to Pope Francis' Relatio #50.