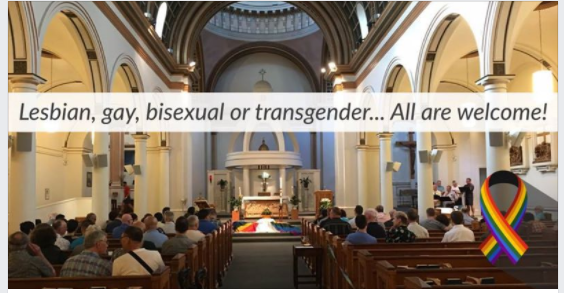 The "LGBT" ministry organization, All Inclusive Ministries (AIM), has announced that you will be "presiding" and "sharing with our community" at the monthly Mass this coming July 28, 2018, at Our Lady of Lourdes church in downtown Toronto.

Before I continue: please do not misunderstand me. I believe you should be going to AIM. What better moment to preach that Jesus loves those suffering from same-sex attraction and to call those who have engaged in homosexual acts to repent, confess and be reconciled with Our Redeemer?

Homosexual acts are, as noted in the Catechism of the Catholic Church,  "acts of grave depravity", "intrinsically disordered" and "contrary to the natural law". As such they are "sins gravely contrary to chastity".  Unfortunately, there are those in AIM who do not share our Catholic belief, and openly reject Christ's Law.


On August 23, 2016, AIM shared the following to their official Facebook page: 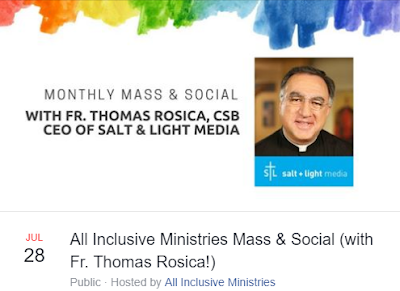 Fr. Rosica, You are an influential man. Your influence is growing here in Canada, and in your home country of the United States of America, where your close associations and friendships with American bishops is noticed on both sides of the 49th. I believe it is accurate to say that you count the ranking Prelate of the United States, Donald Cardinal Wuerl, as your friend. It is no exaggeration then, when AIM states that you are "one of the most influential personalities in the Catholic world..."

Fr. Rosica, as a Catholic priest, confidante and advisor to Our Holy Father, Pope Francis, and friend of cardinals and bishops, the words you say carry great influence. Do not underestimate the good you can do for these poor people: you have an opportunity this coming Saturday, to correct the many grave errors of All Inclusive Ministries.

Please permit me to direct you to a man whom I think it best to address this issue of same-sex attraction; to a man who has been to hell and back, a man who once was a member of the "gay community", a man who - you will be very sad to know - was actually told by several Catholic priests to not give up the "gay lifestyle"! I speak of Joseph Sciambra.

Perhaps you heard of him when you preached your mission at Holy Redeemer church when you were in San Francisco? You may also be aware that he conducts a faithful mission to persons suffering from same-sex attraction. However, you may not be aware of the dangers and dissent that AIM presents to such persons, dangers which Joseph has fully documented.

I urge you to especially review his detailed article on the long history of dissent by AIM.

Disturbingly, AIM also openly teaches a very dangerous, gnostic flavoured idea: that homosexuality is actually God's gift to the human race. This error presents same-sex attraction not as a result of Original Sin and sin in a fallen world, as a cross to bear and offer Jesus, but as a positive blessing, a "special sexual gift" as "God's handiwork". Fr. Rosica, such errors only create confusion and encourage those with same-sex attraction to act on their temptations.

“Homosexuality is one of God’s most significant gifts to humanity. To be gay or lesbian is to have received a special blessing from God. All humans receive their own special graces from their creator, but God has chosen some to be gay and lesbian as a way of revealing something about God-self that heterosexuals do not.”


“Just as God has given a certain gift to priests, brothers or sisters in religious life to follow the gospel with a certain public character, so God has given to gay men or lesbian women a special sexual gift which shows forth the diversity and beauty of God in our world in a public way. All creatures of God show forth God’s handiwork, but the world also needs variation so that the richness of this handiwork is made unmistakably evident. God gives gays and lesbians the rather startling variation of their sexuality to help their brothers and sisters have greater insights into the reality of their God.”


The Catechism encourages those suffering from same-sex attraction in these words: These persons are called to fulfill God's will in their lives and, if they are Christians, to unite to the sacrifice of the Lord's Cross the difficulties they may encounter from their condition.

I end with words of hope for those suffering same-sex attraction, in the words of the late, gentle and holy Monsignor Vincent Foy. You will be very happy to know that the Monsignor - to his dying day - prayed for the conversion of your friend, Gregory Baum.

To all homosexuals we say: Peace, Hope, and Joy in your daily pursuit of chastity and holiness. God be with you! May you always keep in your hearts the words of St. Paul, “You are not called to immorality but to holiness".

Sincerely yours in Jesus, Mary and Joseph,

Father counts Cardinal Wuerl as his friend? That's not exactly a good sign. Is this yet another member of Uncle Ted's boys' club?

Year after year, week after week, hundreds of Filipino and Sri Lankan Catholics continue to attend that parish. They are seemingly oblivious to the homosexual lobby that runs it. Presumably "love for our pastors" is what keeps them going.