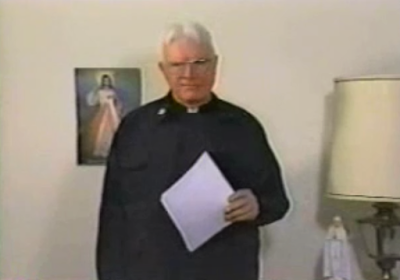 Witness presents the fourth installment of Fr. John O'Connor's "The Homosexual Conspiracy against the Catholic Church", his landmark and prophetic analysis of homosexuality and the LGBT agenda. In this part, he deals with the connection between homosexuality, the abuse of children and the some of the ideological long-term goals of the so-called "gay liberation movement".

Given the homosexual infiltration of the Church we should not be too surprised that so many Catholic schools, Catholic Trustees, and Boards etc., have all succumbed to the siren call of the LGBT agenda. Recall, dear readers that priests sign the papers of those who become teachers in any Catholic system. So when you see a bad teacher you know where the priest who signed that teacher's papers was coming from. When you see priests silent as teachers promote the "gay" agenda" and hoist so-called "Rainbow" flags on innocent children you know what kind of a priest he is. You know what kind of priests you have in Ontario (for example), when you have near universal silence as these flags are placed in one school after another.

Fr. O'Connor reminds us of the fact that there is a connection between homosexuality and pedophilia. Though for public propaganda purposes, "mainstream" homosexual propagandists deny this; the fact is that the evidence speaks for itself. For example, the vast, vast majority of abuse by homosexual priests is directed at young boys, barely out of puberty. In recent years, the more open pedophilia organizations, such as NAMBLA, have morphed into online and other groups more discreetly pushing the abuse of boys under the guise of "love".

@4:00 “Gays want to abolish the laws of consent. You know any sexual activity with a child under 16 or 18 is automatically classified as mandatory statutory rape.” (1993 this speech given)
I am not familiar w/all state laws, but see this being played out in Maryland as filthy rotten scum lawyers classify the gang anal, oral & vaginal rape (2 illegal alien men getting a h.s. education free on the Maryland tax payer!) of a 14 year old girl in a high school men’s room as consensual and to intimidate the girl to say no more about this politically charged issue that could threaten to destroy the Sodomite Catholic Church’s immigration gravy train threatened her w/child pornography charges!
https://www.washingtonpost.com/local/public-safety/rape-charge-against-immigrant-teen-in-maryland-case-will-be-dropped-defense-lawyer-says/2017/05/05/a4806c02-312f-11e7-8674-437ddb6e813e_story.html?utm_term=.04bd4610975f
In Maryland they’ve also got Catholic pro-abort devil possessed delegates Ariana Kelly (like Lady Cannibal Gaga) introducing legislation making it mandatory to “sex educate” children as young as eleven that “Yes means Yes” – even though children that young couldn’t consent to buying a house (for instance)!
“New legislation in the state of Maryland would require the public schools to teach a “yes means yes” standard for sexual consent. This would instruct kids as young as in the seventh grade — 11 years old — about a concept called “affirmative consent” when engaging in sexual activity.”
http://www.lifezette.com/momzette/sex-ed-schools-dangerous-kids/
https://www.washingtonpost.com/local/md-politics/md-house-approves-yes-means-yes-requirement-for-sex-education/2017/03/18/b8c1759e-0c0e-11e7-a15f-a58d4a988474_story.html?utm_term=.773f3ed366e5
This is also big in other sodomite Catholic controlled states like New York and California.
Gov. Jerry Brown approved legislation aimed at making California the first state in the nation to bring lessons about sexual consent required at many colleges into high schools,
https://www.nytimes.com/2015/10/02/us/california-sexual-consent-lessons-now-required.html
“‘What does that mean — you have to say “yes” every 10 minutes?’ asked Aidan Ryan, 16, who sat near the front of the room.
“‘Pretty much,’ Ms. Zaloom answered.”
http://www.cnsnews.com/commentary/hans-bader/new-york-times-reveals-stupidity-yes-means-yes-sexual-assault-policies
http://affirmativeconsent.com/affirmative-consent-laws-state-by-state/
They try to hail this as a ‘protection’ until you’re raped to death like in Genesis and Judges 19 (or Maryland high school toilets)!
"A woman isn't going to be made to feel guilty or complicit or fearful if she goes forward," he said at New York University. "We're not going to allow the schools to cover it up anymore. Those days are over."
http://www.cbsnews.com/news/new-york-yes-means-yes-sexual-consent-policy-private-colleges/
http://www.cnsnews.com/commentary/hans-bader/new-york-times-reveals-stupidity-yes-means-yes-sexual-assault-policies
P.S. The violation of statutory rape laws of children mirrors the violation of euthanasia “consent” laws—where people are now being brutally murdered by their own relatives to the applause of the “state” because it saves “money” (NOT the planet, whore Bergoglio!).
http://www.lifenews.com/2017/06/22/mentally-ill-patients-are-being-executed-under-dutch-euthanasia-law/?utm_source=feedburner&utm_medium=feed&utm_campaign=Feed%3A+lifenews%2Fnewsfeed+%28LifeNews.com%29

Thank you for publishing this – note the sodomites suspended this priest’s faculties & same for Fr Rueda – yet who left the churches?
https://www.remnantnewspaper.com/Archives/2010-ryan-rueda-rip.htm