TORONTO CATHOLIC WITNESS BLOCKED BY CATHOLIC TEACHERS UNION ? ~ They will NOT SILENCE this BLOG!

A PRO-ABORTION and PRO-HOMOSEXUALITY union (OECTA) is trying to BLOCK and SILENCE this blog! 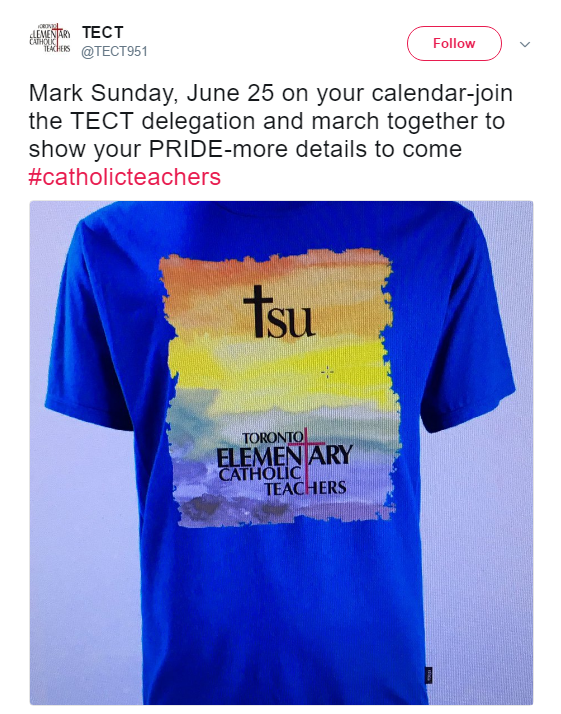 Why is this union attacking this blog? Could it be that this blog has been exposing OECTA's promotion of homosexuality and more recently, abortion? 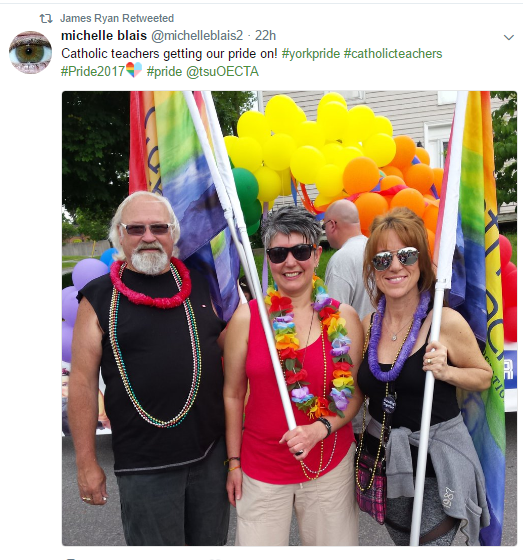 In reality, blocking is a total failure and backfires. It exposes the blocker - in this case, OECTA's Toronto Secondary Unit) as possessing a repugnant, fascistically inclined mindset. The hoped for effect of continuing their subversion and corrupting of children will not continue under the cover of darkness anymore. The light of truth will continue to be shone brightly on this evil, exposing OECTA's cunning support for abortion, and or its completely overt and strident support of homosexuality and the "LGBT" agenda. 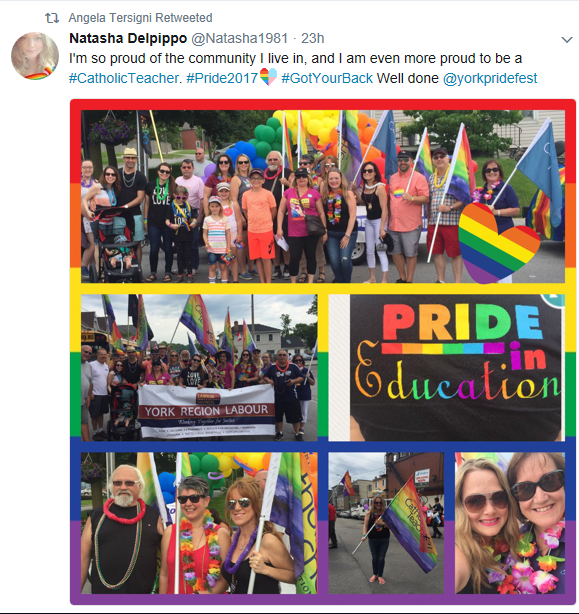 OECTA, in DEFIANCE of Cardinal Collins, will, once again march in the Toronto "Gay Pride Parade". The parade is replete with nudity, sadomasochism, simulated and real sex acts, profanity, sacrilege and blasphemy. For further details on the "parade" please see here, here and here.[warning: blasphemous and graphic content]

I, as a rate payer am deeply offended by this vile, totalitarian union trying to block me (to no avail).  Readers should know that this tax-payer funded school system uses rate payers taxes (mine included) to vastly overpay their teachers, Superintendents and Board members. Are you aware of how much a "teacher" makes? Or how much these Superintendents make - not to mention their huge pensions? Six figures, dear readers, six figures. Just go to the Ontario Sunshine List, plug names in and see them come up! Not very pleasant reading. 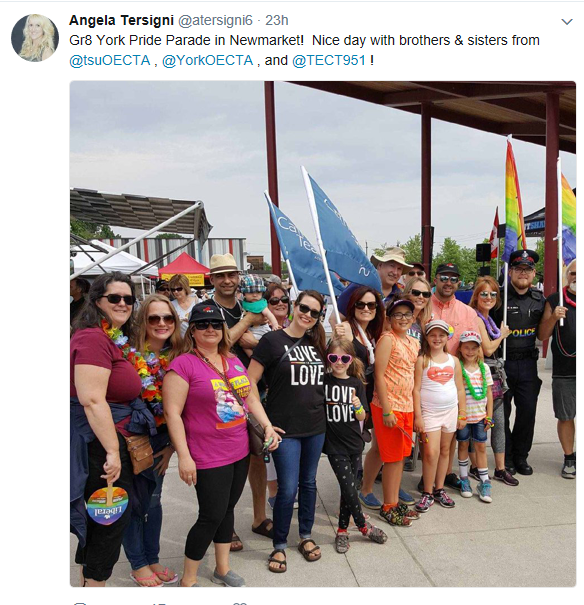 As to OECTA, it has long been teaching heresy in our schools. Women as "priests", the promotion of homosexual behaviour as good and to be accepted, the more recent supporting of extremist organizations (such as Women Deliver) that support abortion and contraception are all part of the dark and gloomy track record of OECTA teaching anything but Catholicism. 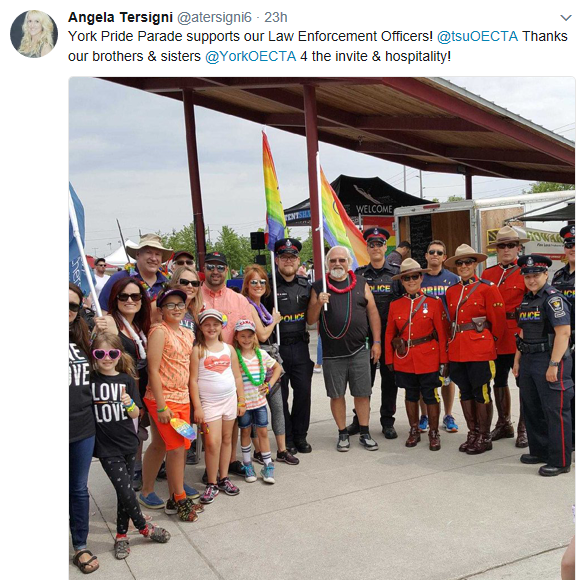 Thomas Cardinal Collins - thank God - spoke up against OECTA in 2014. We need to support the Cardinal, we need to encourage him to do more. But he will not do so, if YOU sit by and yourself DO NOTHING. You will notice that no statement has come this year.

Are you a parent? Have you made an appointment with your child's teacher and school principal to discuss the teaching of religion, or the open promotion of homosexuality in the schools (including displaying the Rainbow flag)? Did you write to the Cardinal to support him? If you have just sat on your hands: SHAME on you! You are guilty by association. You are a collaborator through your silence.

Are you a teacher? Have you spoken up at the AGM? Have you spoken up and ensured that religion is taught properly? Have you removed Rainbow flags from school property? Have you banned bullying clubs that are fronts for the promotion of deviant sexual behaviour?  Did you write to the Cardinal to support him? If you have sat on your hands: SHAME on you! You are guilty likewise by association. You are likewise a collaborator through your silence.

I wonder if Cardinal Collins received thousands upon thousands of letters of support from parents and teachers. Somehow I very much doubt he received more than a few.

Are you a blogger reading this? Are you on Twitter? Will you sit silently by and not speak up when OECTA - a tax funded union - tries to silence a blogger for calling them out for the promotion of evil? If you are a blogger, write about this. If you are on Twitter, tweet about this, tweet to them and ask them why they wish to silence those who defend the Catholic Church. If you sit, idly by, wringing your hands - YOU TOO - are a collaborator. You too, are a coward. You too - like those who vote for pro-abortion politicians but personally oppose - are guilty of corrupting youth by doing NOTHING.

Friends, OECTA - the TSU unit and the Toronto Elementary Catholic Teachers (TECL) will be marching in the Gay Pride Parade on the weekend of the 24/25th of June. Already, other divisions of OECTA marched in "Gay Pride parades" on Saturday, JUne 17th. Angela Tergsini, Second Vice-President of the TSU, James Ryan, former OECTA President, are but two examples of homosexualist teachers corrupting children whose Tweets express their support of the "LGBT" agenda.

More to come. Much more.

Finally, if Catholics wish to discover what real Catholic education should be it would be far better if they studied Pope Benedict XVI, rather than moral relativist and decadent, OECTA.
Posted by Barona at 19:47

This blog is doing what our fake news won't do!

On another note, you might be giving Archbishop Collins (or perhaps the 'education' liaison Bergie) too much credit on this issue.

Read the WCR story and what you read is a self-confident James Ryan dismissing the bishops as merely expressing "displeasure."

The gay activists understood it would be business as usual and they seem to be right because it is now 2017 and nothing changed.

I should get Tweeting about this. In the meantime, let me ask a question: why are their children in these pictures? Do people not realize that children are smarter than they let on? As in, they realize what's off about things much faster than adults do?

Can anyone identify the "Catholic" school teachers and their respective school in these public photos?