Pope Leo XIII predicted the collapse of the West ~ "liberty" without Jesus Christ is "delusive, perverse and misleading..."

"...the very notion of civilization is a fiction if it rest not on the abiding principles of truth and the unchanging laws of virtue and justice"
Pope Leo XIII 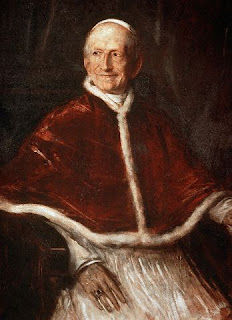 Pope Leo XIII, who unmasked the poison of Americanism that has led the nations of the "West" to the very brink of  moral ruin, also in many encyclicals identified and provided the remedy for the evils afflicting Society: Jesus Christ and His Church. This remedy, the only remedy, has been if not ignored, openly opposed. The Pope in Libertas, Tamesti, Immortale Dei and other encyclicals, exposed the false jurisprudence of the "Enlightenment" and the false political theories that gave birth the revolution (e.g. French, American etc.).


6. Furthermore, that kind of civilization which conflicts with the doctrines and laws of holy Church is nothing but a worthless imitation and meaningless name. Of this those peoples on whom the Gospel light has never shown afford ample proof, since in their mode of life a shadowy semblance only of civilization is discoverable, while its true and solid blessings have never been possessed. Undoubtedly, that cannot by any means be accounted the perfection of civilized life which sets all legitimate authority boldly at defiance; nor can that be regarded as liberty which, shamefully and by the vilest means, spreading false principles, and freely indulging the sensual gratification of lustful desires, claims impunity for all crime and misdemeanor, and thwarts the goodly influence of the worthiest citizens of whatsoever class. Delusive, perverse, and misleading as are these principles, they cannot possibly have any inherent power to perfect the human race and fill it with blessing, for "sin maketh nations miserable." Such principles, as a matter of course, must hurry nations, corrupted in mind and heart, into every kind of infamy, weaken all right order, and thus, sooner or later, bring the standing and peace of the State to the very brink of ruin.

7. Again, if We consider the achievements of the see of Rome, what can be more wicked than to deny how much and how well the Roman bishops have served civilized society at large? For Our predecessors, to provide for the peoples' good, encountered struggles of every kind, endured to the utmost burdensome toils, and never hesitated to expose themselves to most dangerous trials. With eyes fixed on heaven, they neither bowed down their head before the threats of the wicked, nor allowed themselves to be led by flattery or bribes into unworthy compliance. This apostolic chair it was that gathered and held together the crumbling remains of the old order of things; this was the kindly light by whose help the culture of Christian times shone far and wide; this was an anchor or safety in the fierce storms by which the human race has been convulsed; this was the sacred bond of union that linked together nations distant in region and differing in character; in short, this was a common center from which was sought instruction in faith and religion, no less than guidance and advice for the maintenance of peace and the functions of practical life. In very truth it is the glory of the supreme Pontiffs that they steadfastly set themselves up as a wall and a bulwark to save human society from falling back into its former superstition and barbarism.
Posted by Barona at 11:30