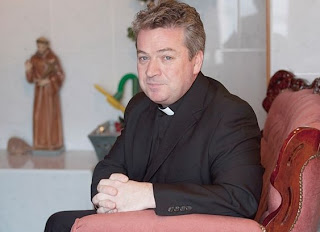 
Readers may be aware that Fr. Despard, along with others, such as Fr. Patrick Lawson (also driven from the priesthood), or laymen, such as abuse victim Pat McEwan (mocked by the previous bishop as a drunkard), are all brave men who have publicly stood up to the homosexual juggernaut that dominates the local Catholic Church in Scotland. While good priests are thrown out, priests who have committed homosexual acts continue in the active priesthood, even receiving promotions, such as "Fr". Paul Milarvie. Truly iniquity abounds.

This blog is blessed to have "eyes and ears" on the ground in Motherwell. Witness will continue to monitor the situation closely.  The following was sent to Montfort by his contacts in Motherwell. 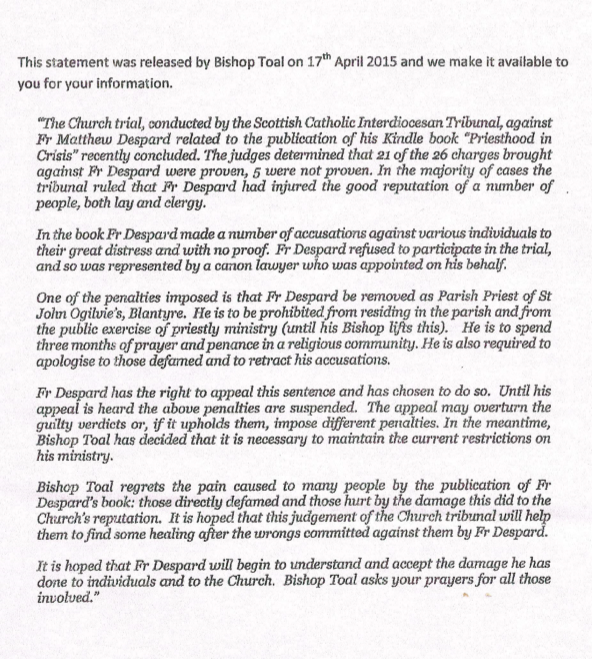 Have you read the book? Can you tell us what it says or have you previously written about it? I bought it, but I couldn't get into it, I'm sorry to say. God bless you. Susan Fox www.christsfaithfulwitness.com

The book was available on Kindle and samples were able to be read. Amazon does not take paypal so there was no way of purchasing it. The parts I was able to read involved the choir and people were easily identifiable by anyone familiar with the parish. I do not know of anyone connected with this blog who has bought and read the book. If I were aware of serious sin on the part of choir members in my own parish I doubt that publishing it on the internet would be an appropriate course of action. The sections on homosexuality and the priesthood were not available in the free sample I had access to.

I have the book, Freyr, but I couldn't get to the good parts apparently because I got bored with the choir director. Now I know they are there, I'll try struggling through it. One of the frustrations of Kindle is you can't skip pages and read the end.
God bless you. Susan Fox www.christsfaithfulwitness.com