Crisis at the Toronto Catholic District School Board ~ Have trustees and teachers LOST the Catholic Faith? 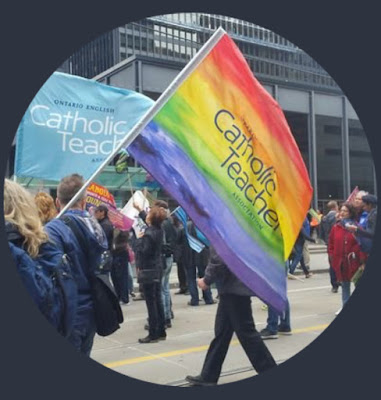 The outstanding Catholic blog, Everyday for Life, Canada once again has published gravely disturbing details on the ongoing demolition of our once Catholic schools. Readers of that blog, as well as our own, will be aware of years of corrosive decay in the areas of Catholic Faith and Morals.

To quote from Everyday for Life, Canada:


The Toronto Catholic District Schools Board (TCDSB) is no longer the school board that many parents believe or want it to be....The Biblical words "sin," "evil," "devil," and "hell" are no longer welcomed at the TCSDB....The updated TCDSB board code of conduct says that boys and girls are not just boys and girls but that a girl can be a boy and a boy can be a girl....

The full article can be read here.

No one is forcing these dissident trustees and teachers, administrators etc. to remain Catholic. The gift of Faith is given freely, but must be accepted in its entirety. As St. Augustine taught, to reject one doctrine, is to reject all doctrine. The Christian Faith is not a personal assemblage of ideas; the keeping of some doctrines, the discarding of others. It is received. The Faith is, as is defined in the Catechism, is: "a supernatural virtue, infused by God" (1,1, 153). This definition also means that there is only one Faith, for God cannot contradict Himself, and impart "faiths" that are in conflict with each other over doctrine.

As I have written before, these trustees, teachers and others, when they reject the Church's teachings on the sanctity of human sexuality, the exclusiveness of sexual expression within Matrimony, are guilty of material heresy. They blaspheme God by mocking the order of Creation and the reflection of the Triune Love as reflected in the acts proper to marriage between husband and wife. St. John Paul II could not have written it more clearly: so-called same sex "marriage" is an ideology of evil.

It is time to move from the pastoral admonition to challenge these dissenters on the doctrinal level, to challenge each and every trustee, teacher and administrator ad seriatum:

1. Do you reject lust as a morally disordered desire that is isolated from the right use of sexual pleasure within marriage? (c.f. CCC 2351)

3. Do you reject pornography as it (e.g.) offends against the marital act? Sex "education" that teaches sexual acts outside of marriage, or the teaching of the 'LGBT" agenda as acceptable expressions of sexuality therefore qualify as pornographic. (c.f. CCC 2354)

5. Do you accept that persons with same-sex attraction are "called to chastity", and therefore to refrain from same-sex sexual activity? (CCC 2359)

7. Do you accept that under no circumstance can homosexual acts be approved? (CCC 2357)

8. Do you accept that for those for whom homosexual inclinations is a trail, they should be accepted "with respect, compassion and sensitivity", such that they can "fulfill God's will in their lives"and, "if they are Christians, to unite to the sacrifice of the Lord's Cross the difficulties they may encounter from their condition"? (CCC 2358)

Those who reject Sacred Scriptures and the teachings of the Church we can openly state they are gravely suspect of material heresy. How we approach human sexuality and the morality of human acts, is not, as one dissenting teacher wrote (his arrogance only outdone by his ignorance) based on political positions. It is based on Divine Revelation through the Authority of Christ's Church. The Catechism is not conjecture, opinion, it is mandated with Apostolic Authority. St. Pope John Paul II wrote:

I today order by virtue of my Apostolic Authority, is a statement of the Church's faith and of catholic doctrine, attested to or illumined by Sacred Scripture, the Apostolic Tradition and the Church's Magisterium. I declare it to be a sure norm for teaching the faith...

Those who reject this Apostolic Authority, and the Catechism are placing themselves in a very dangerous position. Such people expose themselves as actors of ill will, knowingly pouring spiritual poison into our children and youth. They are not just bad Catholics, but public dissenters and evil corrupters of the innocent. Following Bishop Emeritus of Calgary, His Excellency Fred Henry, we quote:

Only God can judge the state of the human soul but it is pure nonsense to suggest we cannot and should not judge human behaviour. Reluctance to judge moral behaviour is the inevitable consequence of moral relativism and moral subjectivism that has eroded confidence in the ability to determine objective moral truth on which sound judgment is based.

And other than offering up his magnifying glass so this garbage can be seen "through a Catholic lens", Cardinal Collins has remained silent. The TCDSB is intent to burn it to the ground, all of it, and his Eminence is content to watch from the sidelines.

Those nine questions that you have put to the Toronto teachers will receive no reply, but they will come back to haunt them in the years to come.

Two other questions come to mind.

If the pope in Rome rejects the Catechism, what do we say?

And if the Apostolic authority is crumbling before our eyes, what do we do?

These misguided Catholic teachers are in need of instruction, correction and discipline. But from whom?

Cardinal Collins has lost his nerve.

And everywhere we look, cardinals and bishops are striking a deal with the world, the flesh and the Devil.

*This is a new millenium,* these foolish bishops are saying, *and it calls for a radical change in our thinking, a new way of being Catholic.*

And so they change church teaching to please the world, appease the flesh, and enthrone Satan at the heart of the church.

Do any of these false bishops call for real repentance, encourage the recital of the Rosary, recall the prophecies of Fatima, consult the Early Fathers, promote the lives of the saints, remind us of the warnings of Pope Leo and Pope Pius X, or call for a return of the true Mass and the adoration of the Real Presence in the Eucharist?
No, to ALL these.

Remarkably it is a Protestant evangelical, Francis Chan, who said this month that the Real Presence was believed by the Apostolic church for well over a thousand years, till the Reformation abolished this central teaching.

This is a Sunday sermon from South St. Paul.

I wish I knew this American priest's name, because all his sermons have been faithful to the teaching of the church.

A good reason not to lose hope in these black times.

*(Clip) Holy Communion, the Reasons for the Gathering of the Church by Francis Chan.*
4 January 2020 sermonindex.net

Flannery O'Connor said that if the Eucharist was just a symbol, it could have no spiritual nourishment.

The death of Sir Roger Scruton philosopher and aesthete, has only just reached me.

Often I would think of him when listening to the charlatans who promote Britain's Turner Prize, or when looking at some of the junk exhibited at the Tate Modern in London.

Postmodern art is an easy con when there are so many gullible people around; look at some of the publicly funded confidence artists who promote their nonsense on TateShots, YouTube.

Evidently Scruton's death aroused the emnity of the LGBT crowd at The Guardian and New Statesmen, but please watch YouTube:

Sir Roger said that the mystery of the Incarnation was difficult for a philosopher to grasp, but that he should at least attempt to do so, in faith.

I hope he found faith in his last days, or rather that God found him.
We can only believe because Christ makes it possible, through the Holy Spirit. Without the supernatural agency faith would be impossible.

Faithful priests in the USA who oppose the LGBT modernist agenda are being sent by their bishops to secret *treatment centres*.
Priests can be *held* in these places for at least six months, at a phenomenal cost, under who knows what coercive *treatment*.

This reminds me of those *dissidents* in the former USSR who were arrested and sent to mental hospitals. These so-called hospitals were indoctrination centres where the dissidents were on forced medication.

Surely it is time for the American laity to demand admission to these *treatment centres* (after all the laity are paying for them) so that they can speak to these holy priests whose only *crime* is that they uphold the Catholic Catechism and church teaching?

Is anything like this happening in Canada or Britain?

One of those misguided Toronto teachers may just catch this on YouTube ...

As someone said, Chesterton had a mind like a sunrise.

Bodley Head published an anthology of Chesterton's best writings in 1985, edited by the English poet P.J. Kavanagh. A book worth tracking down online.

Chesterton said that one of the most degrading of fates was to become a child of one's time.

Today we are menaced by very different *isms* ... postmodernism, pantheism, syncretism, occultism, universalism, and pansexualism.
Economically we are under the tyranny of globalism.

The church can face down all these falsehoods, but only if we have the apostolic faith.

We must pray daily for the conversion of Pope Francis and all his apostate cardinals and bishops.

In 1898 Emile Zola fired off his famous *J'Accuse* letter which accused the French government of systemic antisemitism, leading to the unlawful jailing of the innocent Alfred Dreyfus.

Michael Voris has fired off his own *J'Accuse* to the American hierarchy.
Watch: *The Vortex - Civilize It!*
Church Militant. 15 January 2020. YouTube.

*Most of the nation's bishops are unfit for high office - they are a disgrace to the gospel,* Michael says, a truth increasingly recognised throughout the United States, thanks to the investigative journalism of Church Militant.

The chattering celebrity class don't escape his critique either.

*A murderous gang of Hollywood elites,* is how he describes these shameless pro-abortionists, who influence so many impressionable women and teenage girls all over the world.

It can't be easy for such a loyal Catholic to speak so critically of his bishops; but the Catholic Church has never been implicated before in such filth, lies, and corruption. And Michael Voris's love for his church is apparent even in his harshest words.

On the plus side, please watch:

In this second video Archbishop Cordileone speaks of the sexual revolution, which came to America with the Counter Culture of the 1960s.

Its second generation offspring are those Toronto teachers who have trashed Catholic teaching and embraced LGBT.