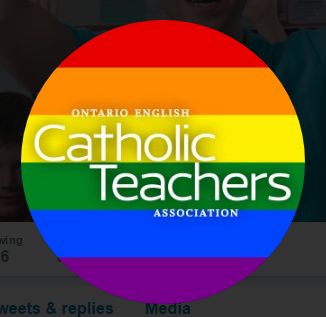 Very soon it will not be possible to state that homosexuality, as the Catholic Church teaches, is an objective disorder in the structuring of human existence.
Joseph Cardinal Ratzinger, April 1, 2005

On October 22, Catholics in Toronto, will have a chance to elect school trustees who actually support the teachings of the Church, without equivocation. 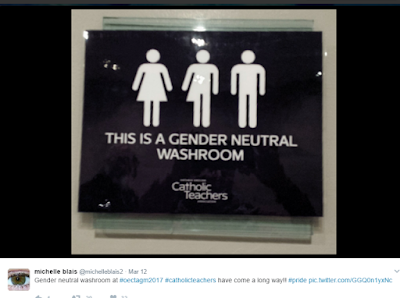 In Ward 4, where I live, the incumbent is Ann Andrachuk. Sadly, Andrachuck supports the poison of gender ideology.

As I wrote previously, young, innocent souls are at stake. 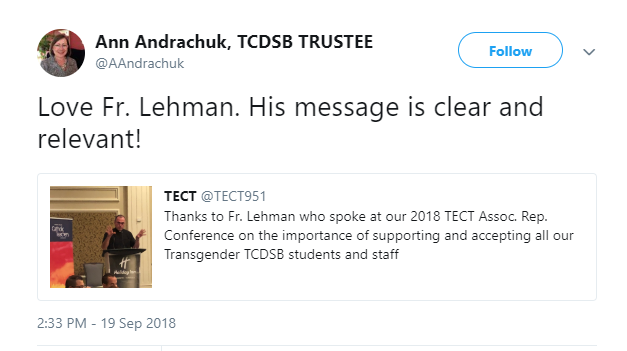 In what was his final book, "Memory and Identity", Pope John Paul II in the chapter entitled "Ideologies of Evil" included the promotion of "homosexual unions" (p.13) as "another ideology of evil, more subtle and hidden, perhaps, intent upon exploiting human rights themselves against man and against the family".

The holy Pope reflected as to how such evil came about:

"Why does this happen? What is the root of these post-Enlightenment ideologies? The answer is simple: it happens because of the rejection of God qua Creator, and consequently qua source determining what is good and what is evil" (p.13).

In writing thus the saintly Pope, was only repeating the warnings of St. Paul.

Let there be no doubt: gender ideology is vicious and evil. It is a killer of the soul, and a gravedigger for humanity, as it attacks the family. Those who support it, must be opposed, for they excuse, defend evil.

Rather than opposing the agenda of OECTA, Andrachuk, has decided the easiest way out is to throw in with the dissenters that control the Union. OECTA has openly promoted dissent and rebellion against the Catholic Church for well over two decades. OECTA even dared to host ex-priest, and arch-heretic, Gregory Baum, at an AGM, though Baum had been notorious for years as Canada's most infamous dissenter. In point of fact, OECTA since at least the late 90s was on record for supporting priestesses and homosexual activity. 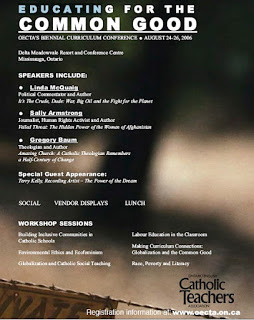 Parents, Catholics have an obligation before Christ, to chose the candidate who accepts and will fight for Catholic teaching. As I wrote in an earlier post, the stakes are simply the souls of our innocent children.

Those you who live in Ward 4, are blessed to be able to vote for the candidate who is
pro-Catholic education.

Your pro-family and pro-life candidate is:
Teresa Lubinski

Who is "Fr. Lehman"? Are there diocesan priests in Toronto who support this LGBT nonsense? TSE