The Ontario English Catholic Teachers Association (OECTA) is not Catholic. That is, it does not adhere to Catholic teaching but openly promotes heresy and sin: including homosexuality, abortion, same-sex "marriage" and women priestesses. [more to follow on these].

OECTA is a militant union with a nominal Christian venner to deceive the simple minded and the unwary.

Unlike the simple minded, homosexual organizer of the "WorldPride" march Kevin Beaulieu understands the implications of OECTA's ongoing efforts to promote homosexuality in schools and by participating in the gay pride events:


“The fact the union still plans to participate in the parade despite criticisms ‘says to me that these people have the courage of their convictions and that they are true supporters and allies of the diversity in our city, including sexual diversity,’ said Kevin Beaulieu, executive director of Pride Toronto, which is organizing the World Pride parade. ‘It’s a wonderful message of acceptance and love and welcome.’ ”


Likewise, New Ways Ministry's, an American-based organization of militant, practicing homosexuals is also very much aware of the important work that OECTA does to advance homosexuality under the guise of Catholic education.

Reading New Ways Ministry's glowing report on OECTA participation at the "WorldPride" event, we can discern several things based on what OECAT president, James Ryan said:

1) OECTA openly dissents from the teachings of the Church and is disobedient to His Eminence Thomas Cardinal Collins;

2) OECTA openly admits it is not a professional association, but a "union";

3) OECTA members - Catholic school teachers freely voted in FAVOUR of participating at the homosexual march that has full frontal nudity, and public sexual acts being performed;

4) OECTA is openly and actively public about its support for the "LGBT" agenda. 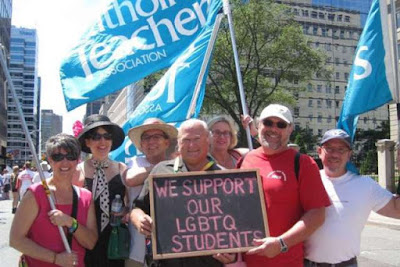 The Ontario English Catholic Teachers Association (OECTA) also marched in WorldPride’s parade following several months of criticism from Toronto’s cardinal and others who opposed the teachers union’s decision to march. OECTA President James Ryan told the National Post the teachers’ participation was an “internal union matter” made through a democratic process. The paper reports further:

“In March, the OECTA voted to send a contingent of more than 100 to the parade as a visible and vocal message that Catholic-school teachers in the province want students to feel supported and free from discrimination.

“OECTA is just aligning with other public unions and teachers’ unions Canada-wide, said Mr. Ryan, whether Catholic or not".

” ‘Coast to coast in Canada, pretty much evey teachers’ union I know of does support LGBT rights without exception,’ [Ryan] said. ‘The Canadian Teachers Federation has been very forward with its support for LGBT rights".


Dear friends, is it not strange that homosexual orgnaizer Kevin Beaulieu and homosexual dissenter Bob Shine of New Ways Ministry's understand what OECTA is promoting, but the various Catholic School Boards that oversees Catholic education in Ontario do not?

I leave the possible answers up to you, dear reader.

To conclude: OECTA is an evil, vicious and anti-Catholic organization. An organization that allows persons who openly supports deviant sexual behaviour to teach innocent children. OECTA not only allows these people to teach, it encourages them, silencing through intimidation any decent Catholic teachers left. OECTA is a corrupter of children.

As a Catholic, one should never appreciate the so called sexual diversity. Is it just me or do other people experience a gag reflex, when exposed to this kind of terminology? Making proud parades to celebrate sodomy, involving children - are all products of degeneracy. How dare they call themselves Catholics? Filthy sodomites, always smiling to the camera in a sleazy, innocence-faking way?
Please, do not apologize to us ladies, but continue to aim your just judgement at these perverts (perverting truth, natural law, children's innocence). After all, THEY are in our (and our children's) faces all the time.

I was a member of OECTA for 31 years. I used to dread profession development days, where a Gregory Baum disciple, would be the featured speaker. The "C", in the acronym, should stand for "contumacious". OECTA takes its doxis and praxis from our neo-pagan culture at large, certainly not from authentic Church teaching. OECTA lost its Catholic soul decades ago. These people, you see marching, become increasingly bolder, as the years go by. The Catholic school system in Ontario will, eventually, implode, and the majority of teachers, as long as they still have jobs, won't be bothered. Never before in the history of Catholicism have there been so many educated lay people, yet never before have educated laity been so illiterate, when it comes to the doctrine of faith morals and discipline. What is even more bothersome, than the state of illiteracy, is the fact that most of these non-observant faithless teachers would say something to the effect: "so what, it doesn't matter what you believe, all that really matters is that you be "nice" person. One's niceness and commitment to inclusion is what the students will remember". The degree of "niceness" becomes the measuring stick of one's "Catholicism". It is a Catholicism without a cross.

Lord, deliver us from the negligence of the bishops.

Get a map and draw a circle of a few kilometers around the OECTA office. Within that circle you will find parishes, KofC and CWL councils, colleges, a chancery office, and religious orders all in substantial agreement with the association. You will see a huge black hole of apostasy. The community that OECTA draws on for its membership could not produce anything else.