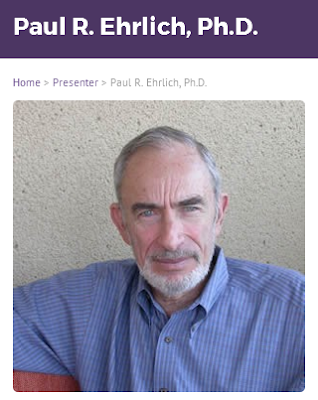 Paul Ehrlich is a Talmudic Jew. He is an enemy of Jesus Christ. Talmudism is the religion created by the rabbis in the 6th century, when the Talmud was finally codified. In Hebrew it is known as "Yahadut Rabanit". This is not the religion of the Old Testament, into which Our Lord was born. It is a distorted perversion of the once true Faith into a man-made religion. Sadly, man made religions lead men from one grave error to another.

The decadent religion of rabbinical talmudism has afflicted so many Jewish people, that today, the vast majority have even stopped believing in the God of Abraham, Isaac and Jacob, and completely succumbed to a false messianic rationalism. This is the result of rejecting Our Lord Jesus Christ. This is the personal tragedy of a man like Ehrlich.

This tragedy of not having the true Faith, is the  singularly most important aspect about this man. Without understanding his philosophy, his ideology, we cannot begin to understand where he is coming from in his desire to establish a worldwide messianic society. It is lamentable that virtually all who criticize Ehrlich's attending the Vatican as an "expert", refuse to confront the elephant in the room: Ehrlich is a Talmudic Jew. Are they afraid of being called "anti-semitic"? Yet, Arabs are semites too.

Talmudic Judaism is an explicit rejection of the God-Man, Jesus Christ who became Incarnate in the Womb of the Lily of Israel, the Blessed Virgin Mary. The Catholic Church now and forever will be the New Israel.

Apparently, some in Rome believe that this evil, Christ hating man has something to offer humanity. Only death. Spiritual and physical.

St. John (8:44), inspired by the Holy Spirit, had this to say about the Jewish rejection of Our Lord. "You are of your father the devil, and the desires of your father you will do" (8:44).

"If, then, the Jews fail to know the Father, if they crucified the Son, if they thrust off the help of the Spirit, who should not make bold to declare plainly that the synagogue is a dwelling of demons? God is not worshipped there. Heaven forbid! From now on it remains a place of idolatry. But still some people pay it honor as a holy place".

The Catholic Church has always followed Our Lord, the Apostles and the Fathers of the Church in exposing the Synagogue of Satan. The Jewish Nation, once blessed by God to give the Messiah to the Nations, rejected Him, crucified Him and have ever since waged war against Him who is one of them in the flesh. There can only be one Israel, it is either the Jewish Nation or it is Christ's Church. The Jews themselves admit that there is a spiritual war between the Church and the Synagogue; specifically referring to the theology of St. Paul, the official Jewish Encyclopedia identifies that the Apostle to the Gentile's theology is in radical conflict with the spirit of Judaism.


Now, let us examine some of the ideas that emanate from the mind of Ehrlich, that is formed by Jewish messianism.

This is especially true because of the ‘endarkenment’—a rapidly growing movement towards religious orthodoxies that reject enlightenment values such as freedom of thought, democracy, separation of church and state, and basing beliefs and actions on empirical evidence...

They are manifest in dangerous trends such as climate denial, failure to act on the loss of biodiversity and opposition to condoms (for AIDS control) as well as other forms of contraception. If ever there was a time for evidence-based (as opposed to faith-based) risk reduction strategies, it is now...

Monumental, but not impossible if the political will could be generated globally to give full rights, education and opportunities to women, and provide all sexually active human beings with modern contraception and backup abortion...

Obviously, especially with the growing endarkenment, there are huge cultural and institutional barriers to establishing such policies in some parts of the world. That halting population growth inevitably leads to changes in age structure is no excuse for bemoaning drops in fertility rates, as is common in European government circles...

Reduction of population size in those over-consuming nations is a very positive trend, and sensible planning can deal with the problems of population aging...

The full document can be read here.

Dear readers, it is indeed a dark hour when the Catholic Church has been penetrated by the Synagogue of Satan, wherein the very sons of the devil who rejected and crucified Our Lord are now being given positions of honour in the Church. The great enemy of the Church is not Freemasonry, is not Islam (the latter two being but mere cudgels in the hands of the 2000 year old traditional enemy of Our Lord); it is and has always been, and will continue to be until the latter days when a remnant will weep and accept Him whom the crucified - the Synagogue of Satan.


Please pray for the conversion of the Jewish Nation. They are in great danger. Just as they rejected and killed the Lord of Glory, so they will accept as the Messiah the Antichrist when he comes. It will be one of Satan's supreme blasphemies when he seduces God's once chosen people to actually proclaim his Antichrist, their false Messiah.