Justin Trudeau: Like father, like son ~ how the ultimate father-son "Trudeau Legacy" will be Death - for the unborn and now the elderly, the disabled ... 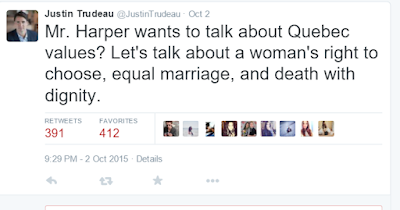 In 1969, then Prime Minister Pierre Elliott Trudeau's Liberal Government legalized abortion in Canada. The collapse of the Catholic Church in Quebec during the 1960s (the "Quiet Revolution") enabled Trudeau and other nominal Catholics (such as his Justice Minister John Turner) to quickly and without opposition enact pro-death legislation. Even prior to abortion legislation, the ground was being prepared with the legalization of contraception, being - once again - promoted by such objectively evil men and "Catholics" as Mark MacGuigan. In later years, he would be joined by tragic figures such as former Prime Minister Joe Clark. The list of nominal "Catholics" promoting, excusing, winking at abortion is endless.

Since 1969, abortion legislation has been consistently liberalized to the point that in 1988 abortion laws were struck down by the Supreme Court; with Parliament was unable to come to any agreement - even to limit late term and/or partial-birth abortion - no law was enacted. Canada is a country literally without any laws against abortion at all. Even secular Europe restricts abortion. Incredible, but true.

The anti-culture of Death - promoted by a very powerful elite in the media, the civil service, academic and financial circles - has a near strangle hold on Canada. It is this strangle hold that now "book ends" the Trudeau legacy.

Last Fall - Pierre's son, Justin Trudeau, as Leader of the Liberal Party of Canada, and victorious in the Federal Election - became Canada's 23rd Prime Minister. It is fair to ask if he was enabled to power by bureaucratic elements in the Canadian Conference of Catholic Bishops who produced their disgraceful "Elections Guide". In fact the "Elections Guide" did not even mention the word "abortion".

I may be wrong - and if so I do apologize - but I do not recall any Churchman, or churchmen, speaking out forcefully during 2015 and the Election. Did you hear your bishop or priests speaking out on euthanasia? Yet, euthanasia was the election issue! Following Trudeau's election, instead of excoriating him on his anti-life agenda - which we all knew was in action - he was either being lauded or fawned over by churchmen who should know better.

If the Cardinal Archbishop of Toronto, Thomas Collins (who has issued a "too little too late" video and Letter) and other bishops have been advised to be silent, to be discrete, to listen to "experts" - they were horribly misadvised, indeed grossly misled by - to put it charitably - incompetent and naive fools. Everyone in the know knew that euthanasia was coming; what the ruling of the Supreme Court was going to be, and then was (9-0, in favour). Yet they were silent. Why? Were they listening - as in 1969 - to the wrong advice? It would definitely seem so.

Now the bishops are speaking, but it is too late. Yes, they will claim "victory" if the Government takes one step back from the recent "recommendations"; such a step-back by the government, if it comes, will result in going back to a comfortable lifestyle and a "terrible compromise" (to quote Mary Wagner who is in prison for peacefully protesting abortion in "democratic" and "freedom loving" Canada). "Catholic" hospitals will merely arrange for euthanasia on the sly, as they do for abortion. It is also well known, that (e.g.) St. Michael's and St. Joseph's in Toronto regularly sterilize and distribute contraception. Is this Catholic? Are they really Catholic institutions?

In this pro-death and compromising sub-culture, like his father, Justin Trudeau is delivering on his high priority item for the extension of death in Canada. Justin will go down in history as the enabler of the death of thousands, eventually hundreds of thousands - if the wicked madness continues for any length of time -  of the mentally ill, the infirm, the disabled, the elderly - all in the name of "health care" and "compassion". This then will be recorded as the Trudeau Legacy: DEATH.