Is heresy about to explode in the Church? ~ Are Fr. Spadaro S.J., and Cardinal Schonborn preparing us for the announcement that adulterers will be allowed to receive Communion? 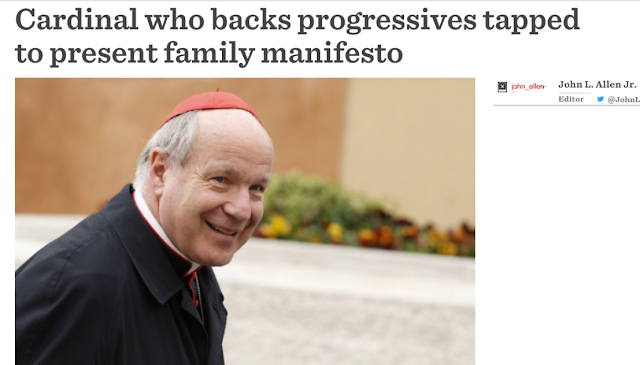 This morning Antonio Spadario S.J., a senior protagonist of the adulterist position has, but a few minutes ago, tweeted an interview from 2015 with Cardinal Schonborn, in which the Archbishop of Vienna expresses support for the adulterist position, as well as seeing "good" in homosexual relations.  This Cardinal has been selected to present on April 8th, the 200 plus page Apostolic Exhortation on the chaotic Synod of the Family from last Fall, 2015.

Readers will recall how not a few cardinals and bishops during the Synod openly supported adultery and homosexuality. The infamous Cardinal Maestrojuan of Panama was perhaps the low point amongst the numerous outrages, when he even proposed replacing the law of Our Divine Lord with that of Moses. Thank God, he was publicly rebuked by the Greek-Melkite Patriarch Laham. This is what we are dealing with: open heresy.

The months following the Synod have not seen the adulterists silent. Indeed, they are ever active, determined to try to impose on the Church the "Christological heresy" (Cardinal Muller's words) of Holy Communion for adulterers. If successful (albeit under a false pastoral praxis), they will undermine not only the Holy Eucharist, but the Sacrament of Penance as well.

Dear friends: be prepared. Be prepared for what Vox Cantoris has consistently been writing and warning us about. Do not forget, we are not dealing with legitimate pastoral practice or changes, we are dealing here with heresy.

The Modernist operating system triumphed at Vatican II. What we are witnessing now, under the uber-modernist Bergoglio is, an accelerated unfolding, of that system, in the area of morals and discipline. Poisoned faith leads to poisoned practice. Get ready, there is a lot more coming. And the spineless bishops, as they did after the council, will remain silent.

I really think this will be much to do about nothing. Yes, more confusion, but nothing schismatic or apocalyptic.

Confusion is from the devil.