Taquisha McKitty ~ set to be murdered by the Canadian State 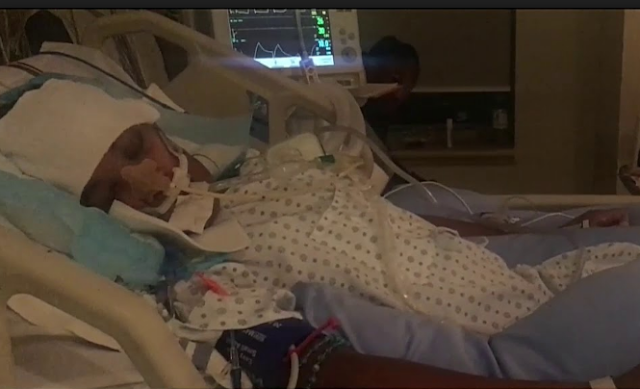 Taquisha McKitty is a young Canadian woman of 27. The Canadian Courts have ruled that she is "brain dead" and therefore her life support machine must be switched off. She must die.

Four days ago, her appeal was thrown out, and her sentence to death by a Canadian Court was confirmed. She will now be murdered by the Canadian State, in a State-sponsored Killing.

Four days, since her death sentence, and SILENCE!

1933 anybody? Hitlerian extermination of German "feeble-minded" and "disabled", anybody? Gas chambers anybody?

Her blood will be on the hands of not only Justin Trudeau, but all those Catholics, Christians and hand-wringers who sat by and did nothing.

Four days, since her death sentence, and SILENCE!

Human life has now been reduced to cost-benefit calculations, and the like. What is happening here in Canada is a horror. An innocent young woman is being done to death by the State.

I must ask: why is there such SILENCE? We had a huge explosion over Alfie Evans... well? Why this SILENCE about Taquisha? Does her life not matter?

Now the following are well connected, sophisticated users of traditional media and social media. Yet, Four days, since her death sentence, and SILENCE!


Our Bishops? Why are they silent?

Cardinal Collins? Why is he silent?

Taquisha is also a black woman.

"Black Lives Matter" Why are they SILENT?

Lifesitenews? Why are they silent? Why are they reporting on (e.g.) drag queens when Taquisha's imminent murder is going to happen right in their  back yard of Greater Toronto?

My dear Catholic friends. Today is the Feast Day of the Roman Martyrs. Let us pray to them for inspiration.

My friends, tomorrow will NOT be "Happy" Canada Day. Those who control this sad country have long ago betrayed Her, and sold out her Christian heritage. Canada is in a dark age, and it is going to get much darker without blood: the blood of martyrs.

Let us turn to Our Lord. Remember the warning: "put not your trust in princes". Please pray for Taquisha and her family.
Posted by Barona at 14:25

Email ThisBlogThis!Share to TwitterShare to FacebookShare to Pinterest
Labels: Euthanasia in Canada, Gospel of Life, The Persecuted Church

From thousands of miles away here in Scotland, I offer up my prayers and fasting for Taquisha and her family.

We must also pray for the Catholic hierarchy in Canada, that they be not ashamed of the Gospel... even now before this generation of vipers!

Thank-you John. Poor Taquisha is being doen to detah in the name of "difference, diversity..." of course "core Canadian values".

Well, the Nazis also had their "core german values", and we know where that led.

This points to a very particular way in which the Western Church has been corrupted. After military defeat, Nazi strategists conceived a plan for infiltration and subversion of their enemy. They rebranded themselves as saviors of the "Christian West" and started waving bibles at their war crime prosecutors. General Reinhard Gehlen, the Nazi head of Gestapo operations in the east became an Evangelical Lutheran pastor and was inducted with his associates into the National Prayer Breakfast in Washington D.C., the elite of the American religious right. He was even honored by the Knights of Malta, a club for European Catholic aristocrats. The Nazis were always a dog on a leash for the global military-industrial complex. They still are, garbed in religious robes. And, Amchurch has become a propaganda and money-laundering vehicle for this evil empire. No-one should be surprised when the dog returns to its vomit.

I will pray a Rosary now for this poor lady.

Huh? What on earth does this have to do with Barona's post?