St. Joseph: Patron of Canada ~ Pray for Us 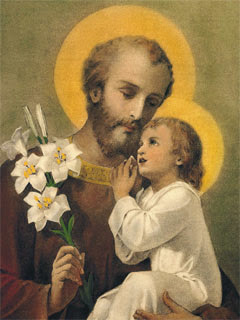 Pope Pius IX's decree Quemadmodum Deus, of 1870 that declared St. Joseph as Patron of the Universal Church. St. Joseph is also the Patron of Canada. As we see from the Decree of Blessed Pius IX, one major motivation was to call upon St. Joseph to defend the Church against Her enemies. Today, the Church not only faces attacks from Her traditional enemies: the Synagogue of Satan and Freemasonry, but She suffers even greater blows from within by those whom should be Her greatest advocates and protectors, clergy who have lost the Gift of Faith.

Let us therefore re-double our prayers and devotion to St. Joseph. To all Canadian readers, a blessed and most holy Feast Day to you!


As God appointed Joseph, son of the Patriarch Jacob, over all the land of Egypt to store up corn for the people, so, when the fullness of time was come, and He was about to send to earth His only-begotten Son, the Savior of the world, He chose another Joseph, of whom the first had been the type, and He made him Lord and Ruler of His household and possessions, the Guardian of His greatest treasures.

And Joseph espoused the Immaculate Virgin Mary, of whom was born by the Holy Ghost, Jesus Christ our Lord, who deigned to be reputed before men as the Son of Joseph, and was subject to him. And Him whom so many kings and prophets desired to see, Joseph not only saw, but abode with, and embraced with paternal affection, and kissed, yea, and most sedulously nourished, even Him whom the faithful should receive as the Bread come down from Heaven, that they might obtain eternal life.

On account of this sublime dignity which God conferred on His most faithful Servant, the Church has always most highly honoured and lauded the Most Blessed Joseph next after his spouse, the Virgin Mother of God, and has implored his intercession in all her great necessities.

And now that in this most sorrowful time the Church herself is beset by enemies on every side and oppressed by heavy calamities, so that impious men imagine that the gates of hell are at length prevailing against her, the Venerable Prelates of the whole Catholic world have presented to the Sovereign Pontiff their own petitions and those of the faithful confided to their care, praying that he would vouchsafe to constitute St. Joseph Patron of the Catholic Church.

Moreover, when at the Sacred Ecumenical Council of the Vatican they renewed still more fervently this their petition and prayer, Our Most Holy Lord, Pius IX, Pope, moved thereto by recent deplorable events, was pleased to comply with the desires of the Prelates, and to commit to the most powerful patronage of the Holy Patriarch Joseph both himself and all the faithful and solemnly declared him Patron of the Catholic Church, and commanded his festival, occurring on the 19th of March, to be celebrated as a double of the first class, but without an octave on the account of Lent.

Further, he ordained that on this day, sacred to the Immaculate Virgin Mother of God and Spouse of the Most Chaste Joseph, a declaration to that effect should by this present Decree of The Sacred Congregation of Rites be published.


All things to the contrary notwithstanding.


CONSTANTINE, BISHOP OF OSTIA AND VELLETRI.

D. Bartoloni, Secretary of the said Congregation.
Posted by Barona at 06:00

MARCH 19, 2018
Today is the 19th day and sedevacantists and traditionalists have not noted that Cardinal Luiz Ladaria s.j made a mistake in the question and answer session of the Press Conference on Placuit Deo.
http://eucharistandmission.blogspot.it/2018/03/today-is-19th-day-and-sedevcantists-and.html