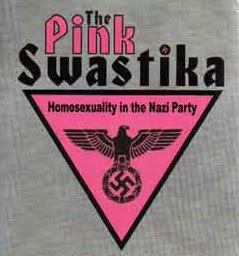 Homosexuality is mentioned in Sacred Scriptures as being a result of denying God. In the Book to the Romans, St. Paul identifies homosexual practices as a result of ungodliness. "They changed the truth of God for a lie".

St. Jude, likewise, links homosexuality to ungodliness: "So with Sodom and Gomorrha and the cities round them, which fell into the same debauchery as their neighbours and pursued unnatural lust; they bear, for our warning, their sentence of eternal fire...Godless and sinners, with how many ungodly acts they have defied God, with how many rebellious words have they blasphemed him".

Guido von List (1848-1919) was an occultist, who also worshiped Wotan. A notorious pedophile, his ideas would influence other occult groups, such as the Thule Society, to which belonged such Nazi homosexual luminaries, such as Rudolf Hess and Dietrich Ekart. von List also influenced the ideas of the more famous occultist Aleister Crowley, who can be said to be the main driving force behind modern day occultism and sexual perversion in the post-War world.

The sexual deviants of Nazism had a gnostic, pagan religion. They believed they were enlightened, they believed they formed a super-race, supermen; they believed that ultra-masculine, homosexual warriors were the highest of the Aryan super-race. It would be these gnostic ideas that would carry over into the homosexual infiltration of Christianity. It would be these ideas that would result in the blasphemous conception of a "Gay Christ" (Our Lord Jesus Christ and St. John); of the belief that David and Jonathan were secret homosexual lovers; that homosexuality is "God's gift" to mankind, etc.

Dear readers, once again I apologize for publishing this profane comment - an exercise in linguistic limitation and a mental exercise in futility. Thank-you for your well researched rebuttal of the historical facts.


Friends, I published this as an illustrative example of the hatred, the anger, the rage.

NO further vulgarities, profanities will be published.

Readers will be continuing to pray for those trapped in same-sex addiction. Homosexuals are called "not to immorality, but to holiness", as St. Paul exhorts Christians.